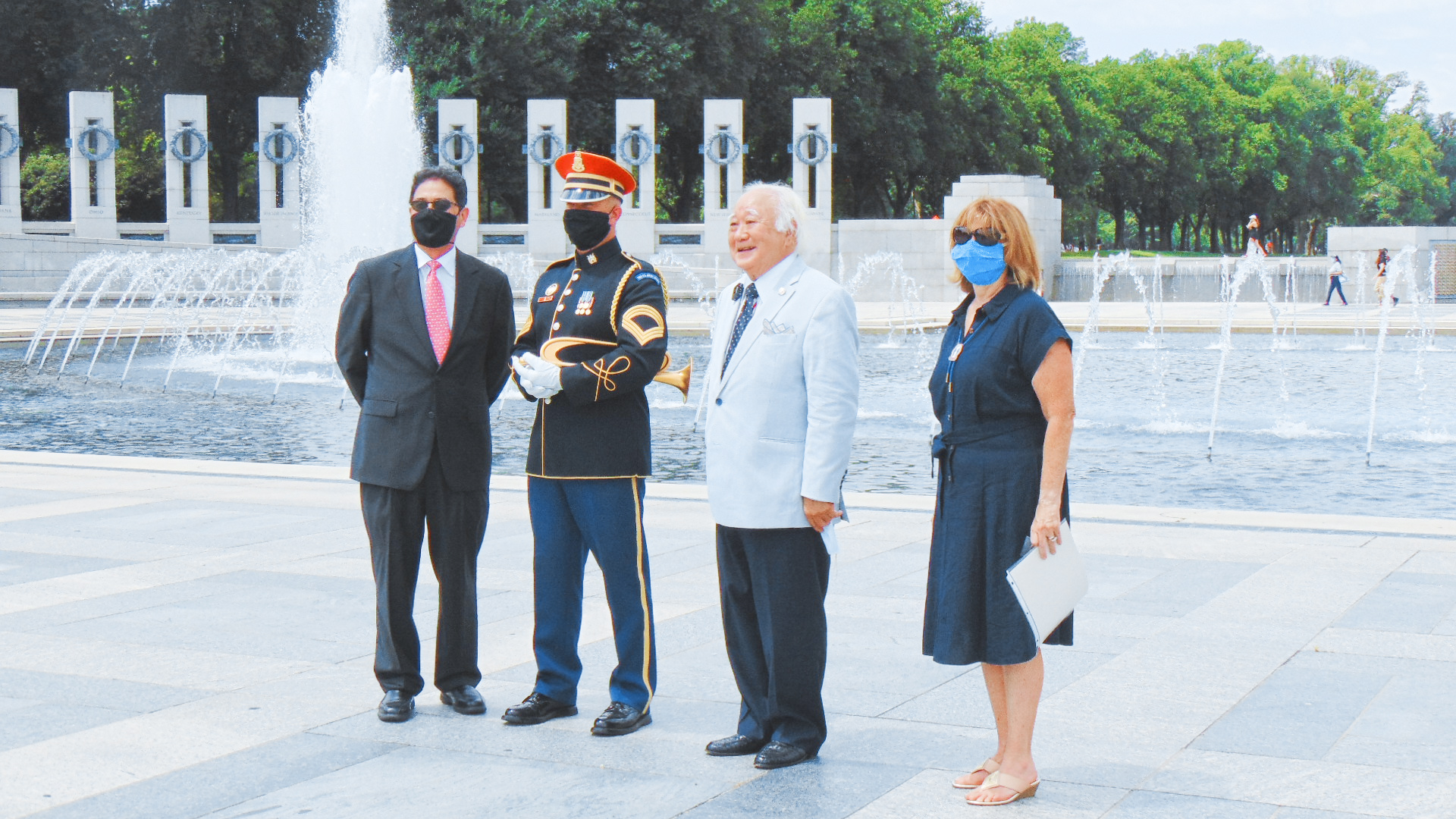 Seventy-four years ago on July 15, 1946, at noon, President Harry Truman reviewed the 442nd Regimental Combat Team at the Ellipse of the White House, following its march down Constitution Avenue, and decorated its colors with its seventh Presidential Unit Citation.

The Japanese American Veterans Assn. commemorated the 1946 ceremony on July 15 at noon by laying a wreath at the Price of Freedom Wall at the National World War II Memorial in Washington, D.C., in honor of the Nisei soldiers who served in WWII. 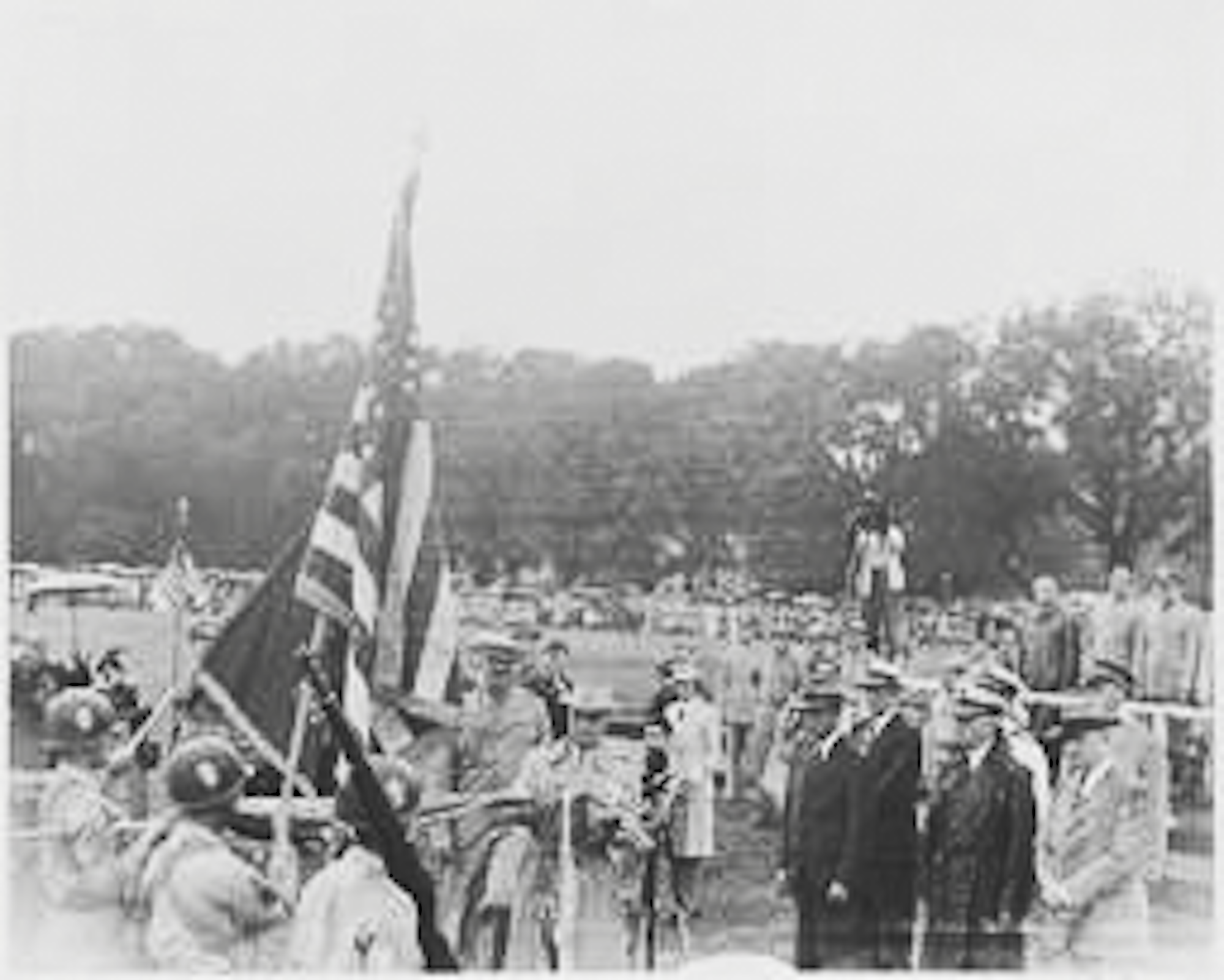 The review by President Truman was historic because the 442nd RCT was a segregated, all-Japanese American combat unit, except for its officers. Over its short history, the 442nd RCT created a combat record that is unmatched.

The 442nd RCT was activated in 1943 while 120,000 persons of Japanese ancestry were imprisoned in War Relocation Authority camps. Volunteers and Japanese Americans from Hawaii answered the call to form the 442nd RCT.

For those who joined the 442nd RCT while imprisoned in the WRA camps, the 442nd RCT was their opportunity to fight prejudice at home. The federal government’s harsh treatment and overt prejudice against them would not diminish their belief in the American Dream that brought their immigrant parents to the U.S.

“You fought not only the enemy, but you fought prejudice — and you have won. Keep up that fight, and we will continue to win — to make this great Republic stand for just what the Constitution says it stands for: the welfare of all the people all the time.”

In his opening remarks at the Ceremonial Plaza, JAVA President Gerald Yamada said, “In his salute, President Truman honored the 442nd RCT’s valor in fighting America’s enemies abroad. More importantly, he congratulated them on winning their fight against prejudice at home.”

“President Truman’s salute was the critical turning point for Japanese Americans,” Yamada continued. “It marks the decisive point that Japanese Americans, by keeping their faith in America, started winning the war against prejudice. This is why we call today — July 15 — the ‘Day of Affirmation.’”

The legacy embodied in President Truman’s salute was credited by Yamada to not only the 442nd RCT but also to:

Yamada also included the Japanese American women who volunteered to serve in the U.S. military as a part of the legacy.

He concluded by saying, “They all helped to forge the legacy from which Japanese Americans started to benefit and will continue to benefit in the future,” and Yamada called on “all Americans to embrace their legacy — by keeping faith in America’s values and its future — especially in the most difficult of times, as did the Nisei soldiers.”

Following the ceremony’s opening remarks, Col. Brett Egusa (USAR) carried a wreath with a ribbon inscribed with “In Honor of the World War II Nisei Soldiers” from the Ceremonial Plaza to the Price of Freedom Wall.

The moment of silence ended when Yamada stated, “For those who served, thank you for your service.” The sounding of “Taps” by a U.S. Army bugler followed, which concluded the program.

In support of the Day of Affirmation, the Veterans Memorial Court Alliance held a floral tribute three hours later on the same day at the Japanese American War Memorial Court in Los Angeles at noon.