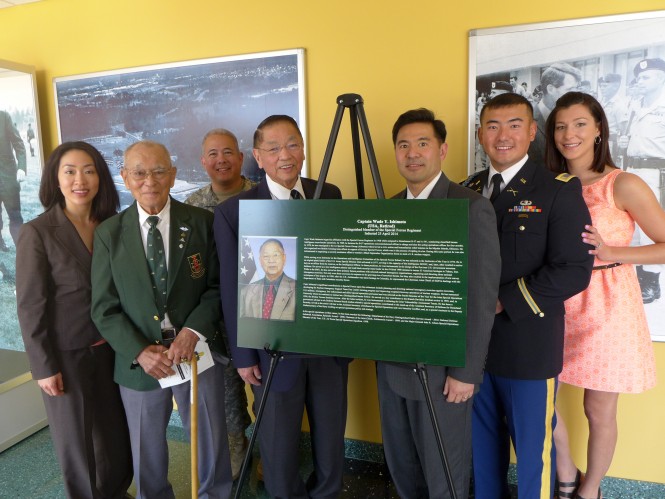 On hand to witness the historic moment were several family members and close friends, including Command Sgt. Maj. Ernie K. Tabata, the first Japanese American Distinguished Member of the Special Forces Regiment; 2nd Lt. Yohei Sakamoto and his wife, Jacklynn; and Karen Conlin, civilian aide to the secretary of the Army in Virginia, accompanied by her husband, Sean, and their son, Maclain, who is Ishimoto’s godson.

Ishimoto’s dedication to military service has made him a legend in the Special Operations community. He began his affiliation with the Special Forces Regiment in 1968, conducting classified human intelligence cross-border operations in Vietnam. He continued service with the 1st Special Forces Group (Airborne) while leading a civic action and humanitarian relief mission to the Miyako Islands, Okinawa.

He was also the intelligence officer and road block security team leader on the ill-fated 1980 mission to rescue 53 American hostages in Tehran, Iran. Even in retirement, Capt. Ishimoto continued to contribute to the Special Forces community, including planning and directing national interagency exercises against terrorism, developing the Nuclear Emergency Support Team Key Leader training program and improving recapture/recovery operations of nuclear weapons.

Said Ishimoto of receiving this recognition: “The term ‘Quiet Professionals’ is often used to describe those in Special Forces, and it describes a person who serves with honor and humility that never seeks self-recognition but who seeks to help others. Those traits were taught to me by many in the military and especially in Special Forces. I just wish that I could have honored them at the ceremony because my induction is because of who they were and what they taught me. The true honor of the induction belongs to them, as I am simply the embodiment of each and every one of them. I salute them for making me what I am today and for the induction.”