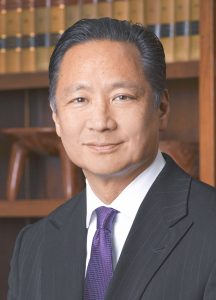 (Aug. 29, 1959-Feb. 22, 2019)
Adachi, 59, was at the time of his death serving as San Francisco’s public defender, an elected position for which he was re-elected four times and held for 17 years, beginning in 2002. Adachi’s parents and grandparents were incarcerated at a War Relocation Authority camp during WWII as a result of Executive Order 9066. Prior to receiving his law degree from the University of California, Hastings College of Law, the Sacramento- born Adachi was involved in the movement to free from prison South Korean immigrant Chol Soo Lee for a murder he did not commit; Lee was eventually freed as a result of the activism and news coverage that uncovered flaws in the prosecution. Adachi joined the San Francisco Public Defender’s Office in 1986. During his tenure as public defender, he was known as a fervent watchdog of police misconduct and clashed with the San Francisco Police Department and San Francisco Sheriff’s Department. In addition to a law career, Adachi founded the Asian American Arts Foundation, which produced the Golden Ring Awards in the 1990s. He also was a musician, author of several books and a filmmaker, with the documentaries “The Slanted Screen: Asian Men in Film and Television” and “You Don’t Know Jack: The Jack Soo Story” — the former an examination of racist Hollywood stereotypes about Asian men, the latter about the life of actor Jack Soo, aka Goro Suzuki. He was also the past president of the San Francisco chapter of JACL. After his death, there was a proposal to rename San Francisco’s Gilbert Street to Jeff Adachi Way, which remains unresolved. His survivors include his widow, Mutsuko Adachi; daughter, Lauren; his parents; and brother, Stan Adachi.