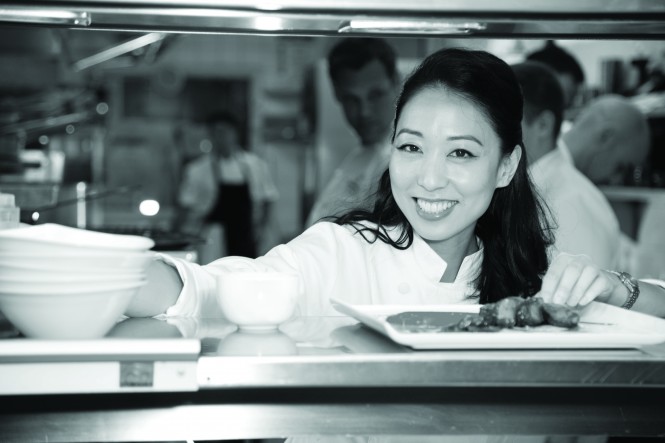 The renowned international chef introduces the flavors of Korea with her new Cooking Channel series ‘Korea Food Made Simple.’

‘Home isn’t necessarily where you live or pay taxes, it’s where you feel like you belong.” Global traveler and chef extraordinaire Judy Joo knows what she’s talking about. One of the four Iron Chefs for the United Kingdom and the executive chef of the Playboy Club London, Joo travels frequently between New York City and London. Originally from New Jersey, she went to New York to study at Columbia University and graduated with a degree in engineering. After years working for Morgan Stanley on the trading floor, she left to pursue her true passion of cooking and, years later, has her own show on the Cooking Channel. 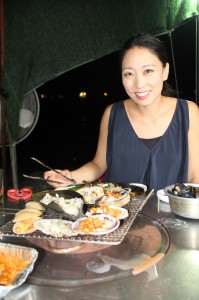 Chef Judy Joo sits down for some grilled clams by the sea near Taejondae Resort Park in Busan for her new series “Korean Food Made Simple.” Photo courtesy of Blink Films/ Media Story 9 Prods

With her new show “Korean Food Made Simple,” Joo introduces the audience to the flavors of Korea, including the trendy dining found in Seoul and the seafood traditions of the seaside city of Busan. With the series, Joo teaches viewers how to make simple, delicious Korean dishes that are easy and quick to put together. Recipes for kimchi fried rice and mandu dumplings are just a few standouts featured on the series. Chef Joo, 39, recently chatted with the Pacific Citizen on her experience with the show and some of her cooking inspirations.

Pacific Citizen: How did “Korean Food Made Simple” come about?

Joo: I’ve been going to Korea since I was a little kid. I spent summers in Korea, so I’ve probably been to Korea more times than I can count — I’ve been going for a lifetime. I filmed a documentary in Korea before, but this was my first large film production in Korea, which was interesting — half of our staff was a Korean crew. It was full of challenges and also good times. It was interesting because it was a cultural divide as well as a language divide, but I think it worked well in the end. We have a great product, and I think the show looks good.

Do you have any favorite moments?

Joo: I would have to say going to the nether, southern regions in Korea — I’ve been to more areas in Korea than my relatives who have lived there their entire lives. And really delving deeply into the cuisine in various regions, I feel very fortunate to have had the experience to do that and to see what certain specialties are in certain areas. It was really educational, a tremendous experience. I learned a ton.

You have a busy schedule as an executive chef and food writer. When did you film the episodes?

Joo: All the episodes finished filming a while ago, and then it went into postproduction and then edit, and then it was delivered to the Food Network and the Cooking Channel in the U.K. Last year, I went back (to Korea) several times. I was there in the summer months, in July and August, and then I went back in October, so there’s a little bit of summer as well as fall. And you’ll see that when you watch the program.

The show debuted on April 19. What are some of the recipes you’ll be sharing this season?

Joo: The series is 10 episodes long, each half an hour. Each episode has its own theme, whether its seafood, barbecue, family meals, fusion. Every episode has its own identity if you will, and I do three recipes in each episode. I have a total of 30 episodes being showcased. And it’s everything from Korean-Mexican tacos to the very traditional Korean kimchi stew to popsicles made out of red bean. My show really covers a wide range of different types of cuisines and ingredients.

You call yourself a Korean American based in London. How has your own jet-setting life influenced the show?

Joo: So the premise of the show is basically me traveling around Korea looking for inspiration for my dishes to cook, and so I’ll go to various restaurants and from that I’ll take one thing or a couple of things and then put my own twist on it. Then I make something entirely new.

With so many other cooking shows focused on cuisines like Southern food and barbeque, what do you hope people take from watching this show?

Joo: This is basically a 101 on Korea as well as Korean cuisine, so it’s really an introduction to the Western world on what Korea looks like, which I think the travelogue part is really important because a lot of people don’t even realize that Korea is a very cool, hip place to be, and it has four seasons, and it’s not tropical. It’s very vibrant, and there’s street markets, and people are drinking and having a good time. So, I definitely wanted to introduce people to Korea as a fun place to travel to.

If they want to go on vacation in Asia, they should check out Seoul — it’s a ridiculously amazing place to go to as well as a food destination for the ultimate foodie. There are so many different flavors going on, and the food scene is dynamic, it’s changing, it’s full of energy — it’s everything from street food like Korean fried chicken to the really authentically rich and traditional soups and stews. There’s so much going on in Korea — we just provide people with a little taste and what the food looks like. You obviously can’t always taste things from watching the TV, but just to educate people a little bit of what Korean food is and what Korea is like.
Anything else that can people can look forward to with ‘Korean Food Made Simple’?

Joo: I think that Asian Americans are a very important demographic in America. Also, me being Asian American, I feel very strongly in trying to help promote the community. And it’s through publications like yours and shows like mine that we become more visible, so I just wanted to say that we all have to help each other and support each other. And I’m kind of paving the way, and it makes things easier for the next generation. We’ll eventually get there — you’ll see Asian Americans on the cover of magazines. It’s baby steps, but I think it’s important to support the community. We’ll get there eventually.

“Korean Food Made Simple” currently airs on the Cooking Channel on Saturdays at 12:30 p.m. E.T. For more information on the series and for complete recipes, visit www.cookingchanneltv.com/shows/korean-food-made-simple.html.