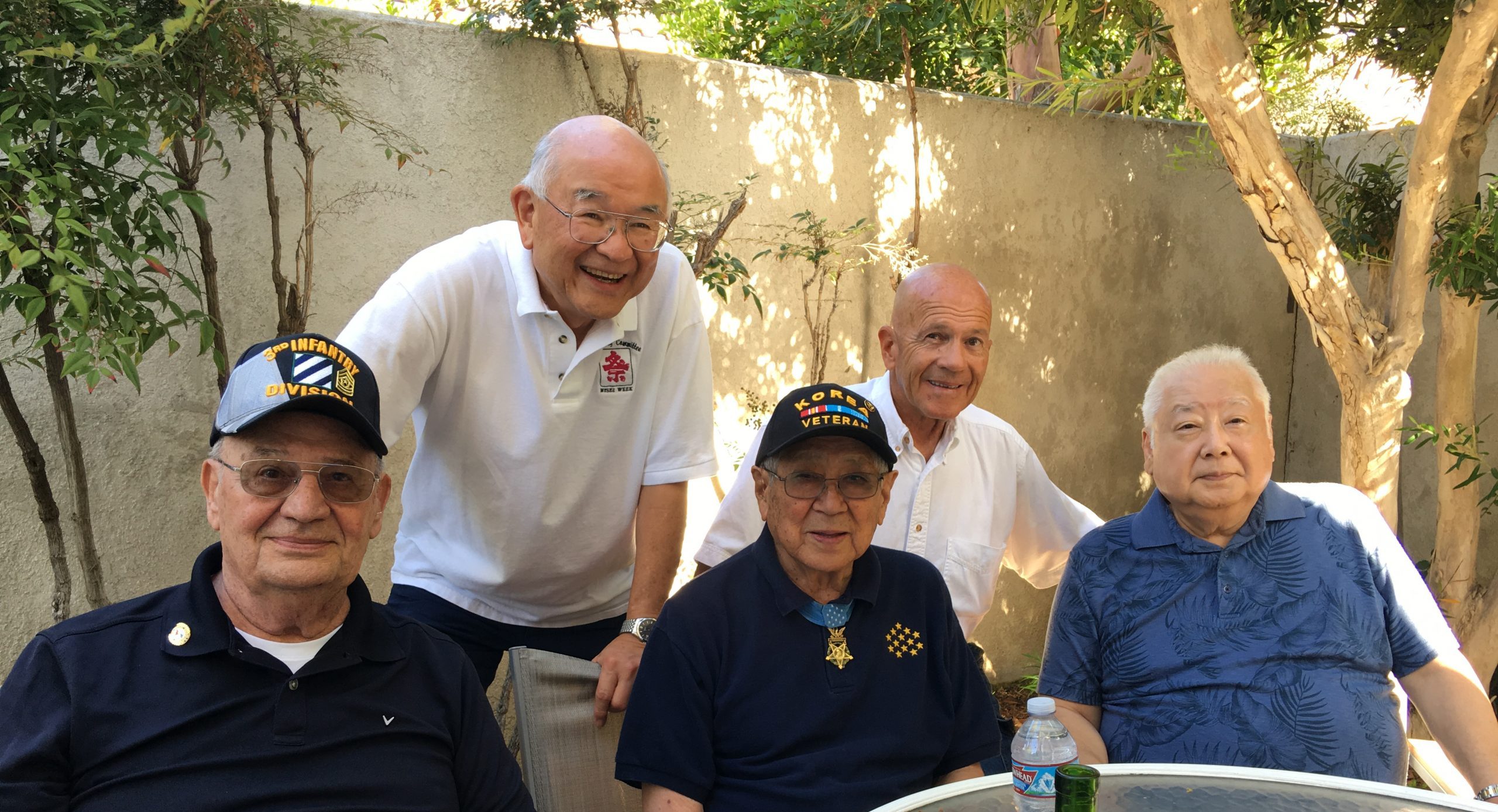 Vincent Okamoto, far left, died at age 76. The photo above was taken at his home in 2017. From left are Joe Annello, Ken Hayashi, Hershey Miyamura, Steve Mick and Vincent Okamoto. (Photo: George Toshio Johnston. © 2017-2020. May not be reproduced without permission.)

Vincent H. Okamoto, a Vietnam War veteran who was awarded the Distinguished Service Cross and became a Los Angeles County Superior Court judge, died on Sunday, Sept. 27. He was 76. 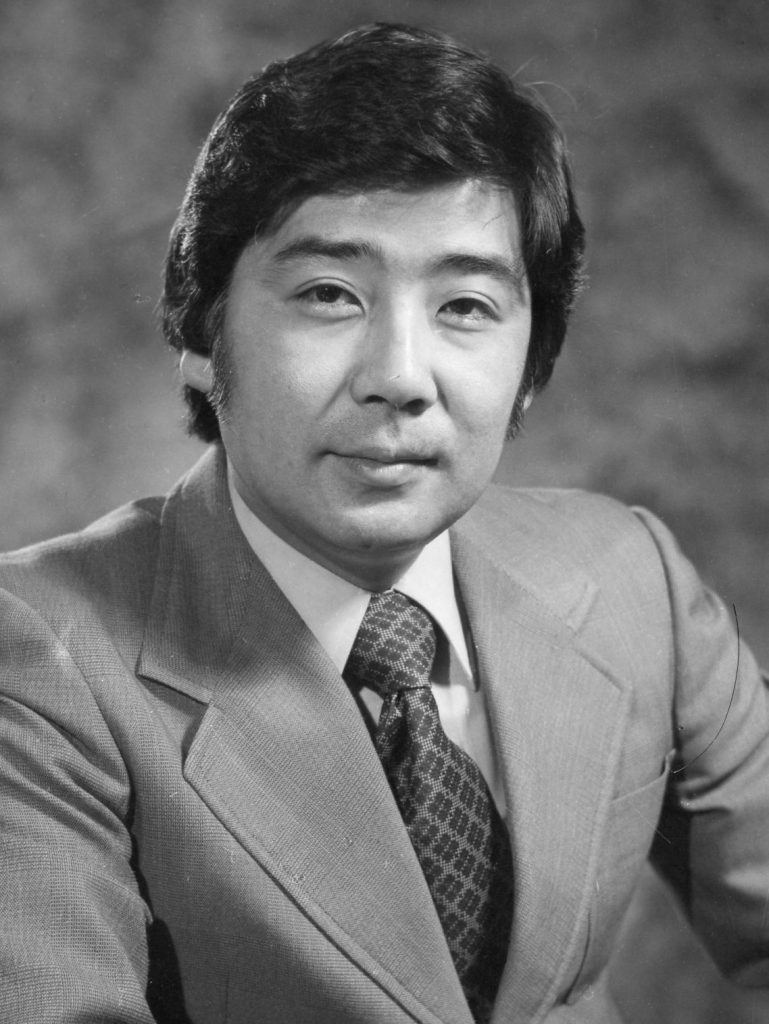 Vincent H. Okamoto, circa 1979, a little more than 10 years after serving in the Army and fighting in the Vietnam War. (Pacific Citizen file photo)

Norman Mineta, a former U.S. congressman and Transportation Department secretary who currently serves as the chairman the Japanese American National Museum’s board of trustees, in a statement said, “It is with sadness and much respect that I note the passing of Judge Vincent H. Okamoto. … His heroism, leadership and public service ensures his place in our country’s history.”

Noting the military service of Vincent Okamoto and that of his six brothers, Japanese American Veterans Association President Gerald Yamada in a statement lauded Okamoto for “ … having the vision, planning, and fundraising to build the Japanese American Vietnam War Veterans Memorial, which was dedicated in 1995 in Los Angeles.  He was a JAVA member and will be missed.”

Ken Hayashi, a longtime friend of Okamoto’s, told the Pacific Citizen, “The JA community and the country have lost an inspirational leader and role model,” and lauded his dedicated efforts toward establishing the Japanese American National War Memorial Court.

“I believe that he considered it to be his most-important project,” said Hayashi. “The war affected him deeply and he cared very much for those who gave their lives, their families and all who served in that war.

“Vince was the driving force behind the dedication of the JA Vietnam Veterans Wall, which was the beginning of the Japanese American National War Memorial Court as we know it today.

“After several emotional visits to the Vietnam Veterans Memorial in WDC Vince decided that we should have a similar memorial to the Japanese Americans who gave their lives in Vietnam. He gathered a group of Vietnam veterans together to seek their support in honoring our fallen brothers. The Japanese American Vietnam Veteran Memorial Committee was formed to raise funds and build the memorial.

“With the help of Edwin Hiroto and the board of Keiro, a successful fundraising dinner was held in 1988 and the search for a home began. Vince approached politicians, businessmen and community leaders, all of whom did not offer a home. The still-remaining controversy of the long and unpopular war was an obstacle none wanted to be associated with.

“Through almost five years of rejection, Vince continued to persevere. Finally, Min Tonai, then-president of the JACCC, said ‘yes’ and the Vietnam Veterans Memorial had a home. The Japanese American Vietnam Veterans Memorial was dedicated on Nov. 11, 1995. It fulfills his vision of honoring those Japanese Americans who made the supreme sacrifice and assures their families that their sons are not forgotten. He asked others to chair the committee but it was his vision and he was the inspiration and leader of the project.”

Go for Broke National Education Center President and CEO Mitch Maki, in a statement, said, “With Vince Okamoto’s passing, we lose not only a true hero, but, more important, a friend. Many of us have our personal stories of how this man motivated, inspired, and assisted his fellow human beings. From his military service to his service as a Los Angeles County Superior Court judge, he set the example of blending honor, service and compassion. We will miss him.”

“From that point on, and throughout his career, Judge Vincent Okamoto remained committed to JABA and its ideals of equality and inclusion.  In more recent years he has served as a member of JABA’s Advisory Council. Judge Okamoto lived a life of honor and service, integrity and compassion.  He serves as an inspiration to all of us.”

A Nisei, Okamoto was the 10th child and seventh son of Issei immigrants, Henry and Yone Okamoto, and was born in 1943 during WWII while his family was incarcerated at Arizona’s Poston War Relocation Authority Center. Two of his older brothers served in the 100th Battalion/442nd Regimental Combat Team during WWII and all the Okamoto sons served in the U.S. military.

After the Okamoto family left Poston, they spent a few years in Chicago and later moved to Southern California, where the Okamoto parents would operate a Japanese restaurant in Gardena.

Vince Okamoto attended the University of Southern California, where he earned a degree in international relations, and then entered the University of California Los Angeles’ ROTC program. Later, he completed the grueling Army Ranger School and was sent to Vietnam in 1968 as a second lieutenant.

For his service he was awarded three Purple Hearts, the Bronze Star, the Silver Star and the Distinguished Service Cross, the second-highest military decoration. He left the Army with the rank of captain.

After his military service, Okamoto returned to USC, earned a law degree, became an L.A. County deputy district attorney and later a councilman for the city of Gardena.

In 2008, Okamoto published “Wolfhound Samurai,” a novel based upon his experiences going through Army Ranger training and as an infantryman in Vietnam. He also wrote a book titled “Forged in Fire: The Story of Hershey and Joe,” about the Korean War experiences of Medal of Honor recipient Hiroshi “Hershey” Miyamura and his friendship with fellow soldier, Joe Annello.

In remembering his now-deceased friend, Hayashi told the Pacific Citizen, “I am still processing and reflecting on a friendship of over 55 years. I will say that he was the most loyal and supportive friend a man could have.”

Okamoto is survived by his wife, Mitzi, and son, Darby.