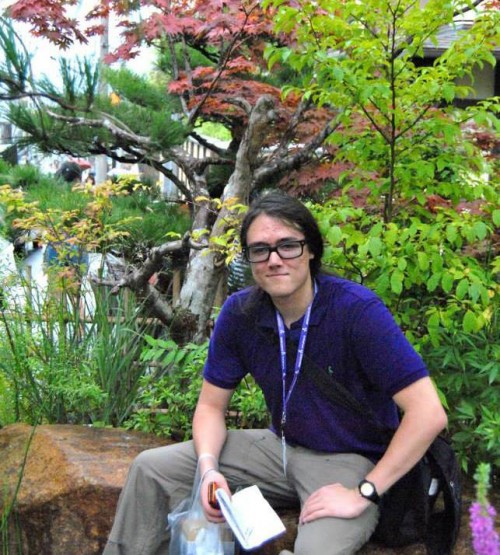 Joseph Day, participant in the Kakehashi Project, poses in front of the consul general’s home in San Francisco. Photo courtesy of Joseph Day

In July, 43 Japanese American young adults traveled to Japan as part of the Kakehashi Project, a program organized by the Japan Ministry of Foreign Affairs, JACL and the Japan Foundation to cultivate cross-cultural relationships and exchanges between Japan and the U.S. Following is a first-hand account of his life-changing experience by JACL New Mexico chapter’s first Kakehashi Project participant.

When people ask, “How was your trip to Japan?” I am at a loss for words, and I don’t know where to begin other then mentioning the ambient beauty of the country. The land is absolutely covered in lush trees. Squeezed between the abundant green are buildings that appear to make the most of the space they are given, and the architecture is inexplicably Japanese: harmonizing with the life around it.

A good place to begin is probably from the beginning. I was struck immediately by culture shock the moment I stepped off the plane into the terminal hall. All the advertisements featured Asian people. Now conceptually speaking, this would be obvious, but it’s not something I had considered before arriving. It’s the concept that officially let it sink in: I was in another country.

As the days passed, we visited temples and museums and participated in many cultural activities while traveling from Tokyo to Shin-Osaka, on to Kyoto and back to Tokyo. One thing that was clear everywhere we went was that there was a very apparent community-mindedness to the people of Japan. It’s something not really found in America that can’t really be fully described.

The streets are barren of graffiti and litter. Small children walk unattended and safe through the city. The people are courteous and respectful of one another. There is something so peaceful about Japan. I believe this community mind-set is something that stems centuries back.

In the ancient art of meditation, there is a way that has been mistranslated and misunderstood. According to the monk at Shunkoin Temple, the concept of emptying one’s mind while meditating is not to try to think of nothing. That’s impossible. The goal is to empty the mind of ego. This ingrained concept of selflessness is prevalent throughout the culture. The respectful atmosphere set in the serene backdrop of the rolling green countryside just sets a mind at ease.

On a personal level, I feel as though Japan has changed me. Whilst on my trip, I tried three things I never thought I’d try. First off, I ate a snail. Surprisingly, it was quite good. I also went to an onsen(ITAL), or bathhouse. It was actually quite relaxing to sit in the hot water and steam for a while. Last but not least, during karaoke I ended up singing a sweet duet of “Desperado” by the Eagles with Masatsugu Mikami, a student of Doshisha University. I’m not much of a singer, but that moment was nothing short of glorious.

Before my trip, I had thought going to Japan might be cool, but I never would have really gone out of my way to travel there. Now, I simply must return someday.

I remember a time when I had the excitement only a child could have about my Japanese heritage. It mostly stemmed from the fact that I knew that samurai swords and ninjas came from there, but I eventually grew to appreciate much more than that.

Over the years, it’s easy to lose some of that kind of awe and wonder, but this trip has rejuvenated that feeling of pride and excitement of ancestry. I can’t help but feel the need to carry on the Japanese tradition. It became apparent that Japanese culture is being lost under an urban setting and Americanization. The college students over there were very surprised to find that I had done taiko and practiced martial arts, for it seemed just as foreign to them as it is to my American peers.

The final day there was a real focus on self-identity. Floyd Shimomura, prominent figure of the JA community, also one of our chaperones, told the participants of the Kakehashi Project of his grandfather, a man he had never seen cry. He had always intended to return to his homeland of Japan, however he never got the chance. When he heard that his son was going to visit Japan, through teary eyes he expressed his sentiment that he was happy that his kin would carry on his unaccomplished goal.

Yoshiko Imazato-san, our guide and translator, told us she had never really seen herself as Japanese, but after her time with us, her perspective had changed, and she identified as Japanese. One of my fellow participants, Jenna Mukai, was of Korean lineage, however she was adopted into a Japanese American family. Through this she identifies as Nikkei. I, myself, though I am but a quarter Japanese, identify myself as Nikkei as well and am proud to have, in a way, returned to the land of my ancestors.

I would like to take this opportunity to thank the Ministry of Foreign Affairs, the Japan-U.S. Educational Commission, the Japan International Cooperation, the Laurasion Institution and finally the Japanese American Citizens League for this unbelievable and life-changing opportunity. I am humbled and can’t express my gratitude enough. Thank you.