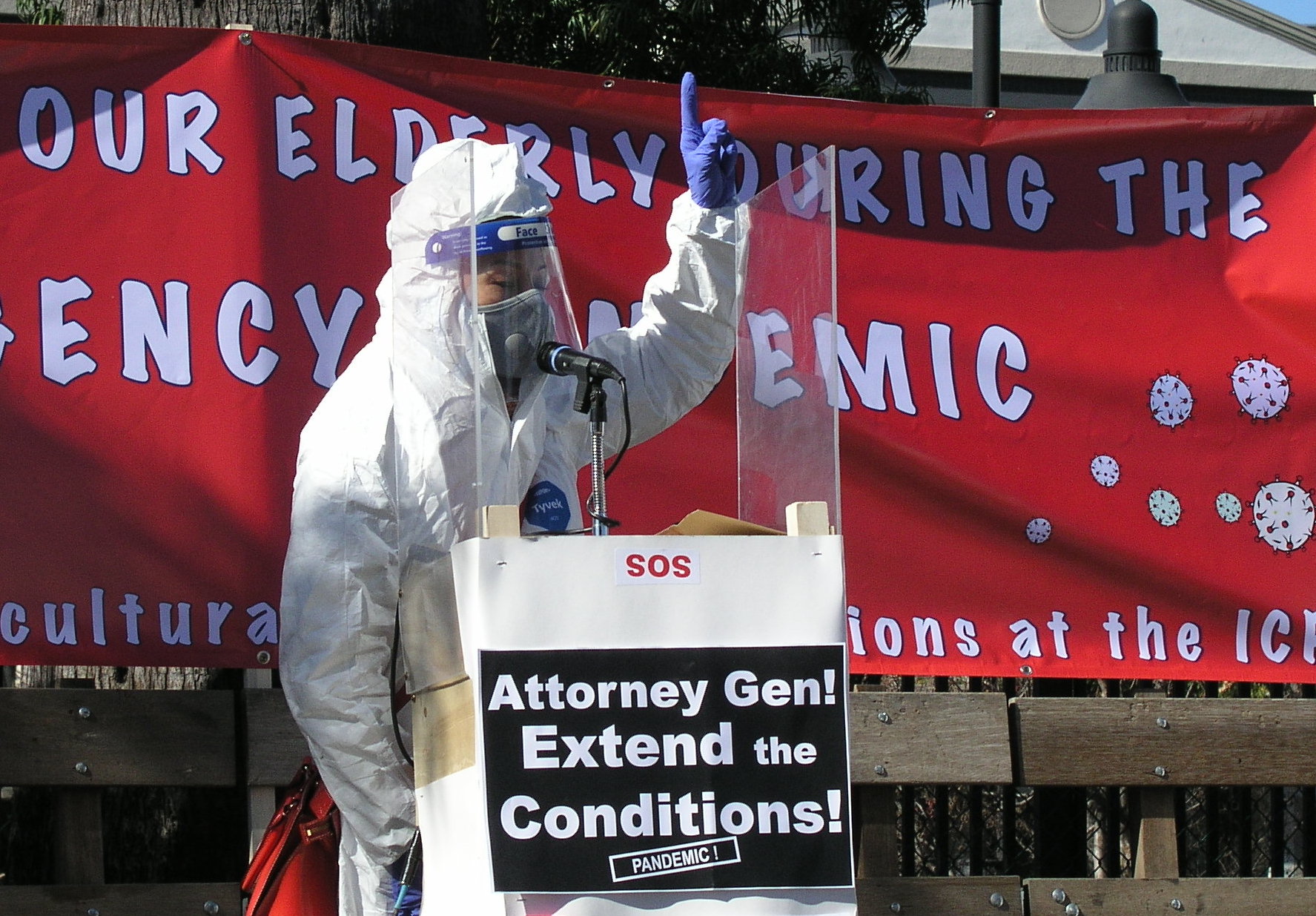 Pair of Petitions Aim to Stall, Stop Scenario Set in Motion in 2016

With just days to go before the arrival of a Feb. 1 deadline set five years ago, an ad hoc group of community activists calling themselves SOS (Save Our Seniors) staged a cacophonous rally on Tuesday, Jan. 26, outside the Sakura Intermediate Care Facility in Los Angeles’ Boyle Heights neighborhood, east of downtown.

At stake: The future of the 64 residents — average age 92 — living at the at ICF. According to actor Tamlyn Tomita, who was one of the many speakers that day, the situation was bigger than the fate of those residents.

“It is not just a Japanese American issue,” Tomita said, referring to the rise of gentrification that has not spared Boyle Heights. “It is a neighborhood, community issue.”

With the Feb. 1, 2021, deadline having arrived, what will happen next remains to be seen. That fluid status quo dates back to Feb. 1, 2016, when the nonprofit Keiro Senior Healthcare sold its properties that housed four facilities specializing in culturally sensitive eldercare facilities for ethnic Japanese to the for-profit Pacifica Cos. LLC for $41 million.

The California Attorney General’s office, then led by Kamala Harris before she became a U.S. senator and later, the current vice president of the United States, mandated that to approve the sale, Pacifica must continue to offer unchanged for five years the same level of bicultural-bilingual care the mostly elderly residents of Japanese ancestry depended on for their physical, mental and emotional well-being.

The rally sought to shine a light on the potentially dire outcome that could see the Sakura ICF residents displaced as the five-year moratorium was set to end, with Pacifica having revealed in the fall of 2020 its plans to get permission from the City of Los Angeles to convert the ICF to multi-dwelling apartments.

SOS’ goal was to get an extension on the five-year agreement for the welfare of the ICF’s residents, and it had launched a petition drive to gain support for that plan. But that was just one of two “Keiro”-related petitions launched in the run-up to the Feb. 1, 2021, deadline.

The second petition — https://tinyurl.com/yy7eud6t — intends to gain support to keep Pacifica from closing down the Sakura Intermediate Care Facility and moving its 64 elderly residents elsewhere so that Pacifica use the site to build market-rate apartments.

Tomita asserted, “Pacifica has broken its promises agreed to and subsequently chipped away at our nation’s only Japanese bilingual and bicultural character of food, activities, music, sound, stories, restricted rent increases, no leasing, rebuilding, changing, selling or reduction of services — and especially at this time of the Covid pandemic.”

One of the most-pressing concerns of SOS now with regard to the Sakura ICF is the SARS-CoV-2 pandemic and how the disease it causes, Covid-19, is especially deadly to the elderly, according to Monkawa, who spoke to Pacific Citizen prior to the rally.

According to Monkawa, who is also a member of the Community Advisory Board (CAB) of the Keiro Pacifica properties, moving those 64 elderly ICF residents from the facility — which has been kept “Covid free” during the lockdown — would be especially detrimental to their health. (This is in contrast to news reports of outbreaks of Covid-19 at Kei-Ai Los Angeles and Kei-Ai South Bay, which have resulted in several deaths.)

“We on the Community Advisory Board have sent a letter [to the California Attorney General’s Office] saying we believe the seniors deserve to have their conditions extended because the promises that were given to them to keep things status quo for five years were broken,” Monkawa said. The California A.G.’s Office brokered the 13-point conditions of sale in 2016.

Monkawa also said that in 2018 and 2019, “Pacifica failed in the compliance report with how well they’re going to stick with the conditions of sale.” He also cited how there was a failure to repair an elevator “for several months” and the cancelation of a “company store” without notifying the residents.

There are also problems with Pacifica at other former Keiro facilities, Monkawa said, citing a California Department of Health reporting showing spikes in patient care violations at the South Bay Kei-Ai and the Lincoln Heights Kei-Ai.

“Based on those things, we believe the seniors deserve an extension,” Monkawa said. As for the duration of an extension, he said, “We’re willing to negotiate.”

One possible wrinkle with having the California Attorney General’s Office take action on the matter: the current A.G., Xavier Becerra, has been nominated to serve as the secretary of Heath and Human Services under the recently inaugurated President Biden — which might mean the Pacifica matter could fall through the cracks.

Nevertheless, Councilman de Leon sent a letter to Attorney General Becerra on Jan. 14 urging that he “take another look at this proposed transition in light of this unprecedented pandemic and extend the current conditions to permit the current residents to continue receiving care …”

Also on the political front, Assemblyman Muratsuchi in December announced he would introduce legislation to block Pacifica’s plan to move forward with its conversion plans. Included in that bill would be a provision requiring the owner of facility like former Keiro properties to provide at least six months of advance notice to residents of a facility like the Sakura ICF.

Those political actions came about after Pacifica, in the fall of 2020, applied to the Los Angeles City Planning Commission to convert the ICF into apartments, which was the impetus for the first petition to prevent that from happening. The Boyle Heights Neighborhood Council’s Planning and Land Use Committee later came out opposed unanimously to Pacifica’s proposal for the Sakura ICF.

The chair of the CAB, Dr. Kenneth Hayashida, told the Pacific Citizen prior to the rally that Pacifica has been uncooperative and that it among the conditions of sale was a requirement that it submit annual reports for review.

“The companies are supposed to be sending reports to our board to have me, as the chairman, and the board certify that they are complete and accurate and reflective of what’s going on,” Hayashida said. “Well, the board for two years has not approved those reports because they were felt to be incomplete.”

Speaking at the rally, JACL PSW District Gov. Takayama relayed how she had been present at last fall’s Boyle Heights Neighborhood Council Planning and Land Use meeting, when a Pacifica representative presented its plans for the current Sakura Gardens site.

When the representative was asked where would the current residents be placed, Takayama said, the answer was that some residents, if they are able, can be placed in other rooms on the campus and others would be relocated outside Sakura Gardens.

A follow-up question asked was whether the residents would still get the same care necessary care and, if relocated outside Sakura Gardens, would they go to a home that was culturally sensitive and that honored the five-year agreement. According to Takayama, the answers to both questions were unsatisfactory.

“It was very obvious that no thought was given to the care of these residents,” Takayama said. She added that several JACL chapters, including SELANOCO, Greater Los Angeles, San Fernando, Twin Cities JACL in Minnesota and Mile-Hi in Denver, support an extension of the five-year agreement.

The National JACL provided the following statement regarding the situation, which was supposed to be included in the Tuesday rally but was overlooked.

“One of the fights JACL joined in years ago was to highlight importance of culturally and linguistically appropriate services to Asian and Asian American communities. For individuals with limited English proficiency, health outcomes are proven to be improved when services are received in the preferred language other than English, and diet and activities of daily living are done with sensitivity to the individual’s cultural background.

“Originally part of Keiro organization, Sakura Gardens was part of a comprehensive network of culturally proficient services for aging members of the Japanese American community in Southern California for over 50 years. With the sale of Keiro’s final remaining properties in 2016, Pacifica Companies took ownership and management of Sakura Gardens with the promise of at least five years of continued service to its residents. Unfortunately, that five years is coming to an end and Pacifica is asking to convert the facility to mixed-use housing for families and a parking garage.

“Sakura Gardens is emblematic of a growing problem in the downtown and East L.A. area and across the nation as ethnic enclaves are being replaced by gentrification. The Covid pandemic has exacerbated the strain on neighborhoods like Little Tokyo and Boyle Heights, as we continue to lose the foundational community businesses and residents that made the communities what they are today. Sakura Gardens has been a key part of that fabric both to the Boyle Heights community and what continues to our nation’s largest Japanese America community South California for over 50 years.

“The threat of the Covid pandemic is felt even greater for the residents of Sakura Gardens as restrictions on programming and shifts in staffing and residents served have applied further stress upon the residents. Now the threat of removal from their homes due to the proposed changes is unconscionable during a pandemic whose impact has been most acutely felt in the senior community served by Sakura Gardens.

“We call upon Pacifica Companies to pause and take stock of the dangers of proceeding with the closure to its residents, to whom they remain obligated as caregivers. Pacifica must work with greater transparency with the community that has supported Sakura Gardens for its 50 years of existence to ensure the community’s needs are served.

“Sakura Gardens was founded on the mission to honor our community elders. Pacifica should honor that original mission to serve its residents and ensure their safety throughout the ongoing pandemic. We hope that all interested parties recognize the importance of Sakura Gardens to the immediate Boyle Heights neighborhood and the local Japanese American community and find a way to continue to serve our seniors through the established Sakura Gardens model of care.”