LOS ANGELES — A memorial was dedicated on Nov. 9 to Abraham Lincoln High School alumnus Sadao Munemori, who graduated from the school in 1940 and was killed in battle during World War II. 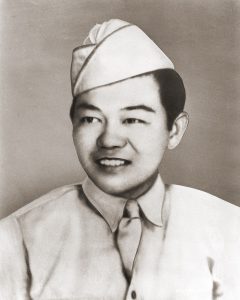 In an emotional ceremony, the polished black marble memorial was unveiled in front of the school’s auditorium, engraved with the Medal of Honor citation describing Munemori’s heroic actions in Seravezza, Italy, in 1945.

Munemori enlisted in the U.S. Army in November 1941. He then volunteered for the 442nd Regimental Combat Team and later joined the 100th Battalion and fought in France and Italy.

While in battle against Nazi soldiers in Italy, a grenade was thrown in the direction of two of Munemori’s comrades. The 22-year-old Munemori “arose into the withering fire, dived for the missile and smothered its blast with his body. By his swift, supremely heroic action, Pfc. Munemori saved two of his men at the cost of his own life and did much to clear the path for his company’s victorious advance.”

Said Lincoln High Principal Jose Torres, “It was a very emotional ceremony that honored one of our own. Sadao Munemori personified the principles we try to instill in our students today — respect, responsibility and honesty. He was a true hero.”

Among those to participate in the dedication ceremony were members of the 442nd RCT and officials from the Go for Broke National Education Center. Also on hand were Audrey Jones, Munemori’s grandniece, and Janet Nakakihara, Munemori’s niece.

The Lincoln High Alumni Assn., Lincoln Heights Neighborhood Council and AARP collaborated in organizing the tribute and raising donations for the memorial.