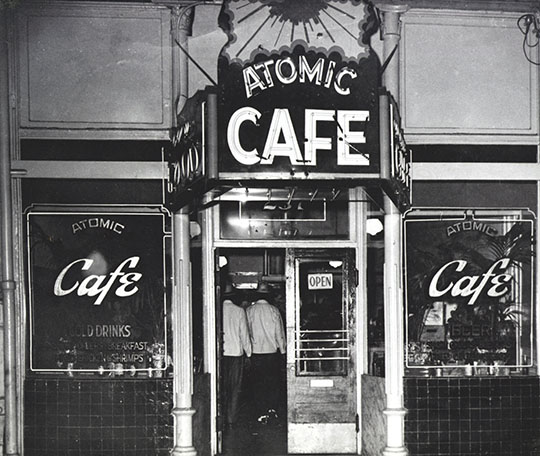 The old storefront of the Atomic Cafe. Photo courtesy of Nancy Sekizawa

Metro will demolish the historic brick building on First and Alameda Streets in Little Tokyo, the former site of the Atomic Café, a post-WWII Japanese American-owned restaurant and punk mecca, and the Troy Café, the birthplace of Chicano rock band Quetzal.

Before she was “Atomic Nancy,” Nancy Sekizawa was a normal child who would nap in a booth while her parents served customers in their Little Tokyo restaurant, the Atomic Café.

“You could say that I was a J-town girl,” said Sekizawa of growing up in Los Angeles’ Japantown. “That’s all I really knew. I was going to school, and then I would go to Little Tokyo or Atomic Café to work with my parents.”

Minoru and Ito Matoba opened Atomic Café in 1946, shortly after World War II and the mass unjust incarceration that swept up Ito Matoba and some 120,000 people of Japanese descent. 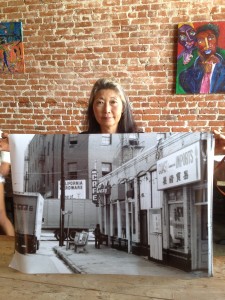 After being displaced twice, the café made a final relocation in 1961 to a modest brick building with large plate-glass windows on First and Alameda Streets, the current location of Señor Fish.

Sekizawa, now 60, recalls how her family restaurant was one of the few in that era with a jukebox. In the daytime, Nisei and Little Tokyo businesspersons would gobble up Atomic Café noodles or other restaurant fare. Unknowingly grooming her to become Atomic Nancy, Sekizawa’s father would give his daughter, then 3 or 4 years old, stacks of discarded 45s from the jukebox.

After her father had a stroke in the mid-1970s, Sekizawa took over the café operations, jamming the jukebox with punk rock music. “My mom was really liberal. She really liked anything pretty much,” Sekizawa said. “She would react, ‘Oh, God! That sounds really good!’ And it would be something from, like, Sid Vicious.”

In the late 1970s and early ’80s, the Atomic Café became a mecca for punk and rock bands. The unlikely nightspot lured in patrons such as the Ramones, Sid Vicious, Devo, David Bowie, the Go-Gos and Blondie, to name a few. The Atomic Café heir would comb the L.A. Weekly(ITAL) to see which bands were playing in the area to get an estimate of the expected late-night crowd.

But the Atomic Café’s rented Seeburg jukebox played its last tune when the restaurant finally closed on Thanksgiving Day of 1989. “It was so sad when we had to close the doors, just knowing that my family struggled,” Sekizawa said. “I didn’t really want to fight it because I felt like it was all done, we had done it.”

Sekizawa, who became a drug treatment counselor, plans to return to the former site of the Atomic Café on Feb. 22 for a fundraiser that aims to help preserve the cultural and musical history of the building.

The Los Angeles County Metropolitan Transportation Authority will demolish the building in the late summer or early fall to build a 1.9-mile underground light-rail system that connects the Gold Line to the Seventh Street station. Thanks to Little Tokyo community leaders, who have been actively involved since the project’s inception, the story of Atomic Café will be memorialized.

“We will continue to work with the community to ensure their concerns and ideas are addressed,” said Metro spokesman Rick Jager. “In fact, we will be planning on some type of a graphic illustration at the station, noting the musical historical significance of the location in years’ past. We may even use some of the old tile work on the existing building in that graphic illustration at the station.”

The $1.366 billion Metro Regional Connector project is slated to open in 2020. The current occupant, Señor Fish, was given 30 days to vacate the historic building.

“Under Metro policy, they are entitled to relocation assistance and payments,” Jager said. “However, Señor Fish has not shared their relocation plans with Metro. There are a number of eligible payments that they could be entitled to receive, and they have 18 months after relocating to make a claim. However, they will need to be forthcoming with information in order for us to process a claim.”

In addition to telling the story of Atomic Café, the history of the subsequent business, Troy Café, will also be commemorated. Owned by Sean Carillo and Bibbe Hansen (mother of Channing and musician Beck), Troy Café during the 1990s was the training ground for Chicano musicians.

“I did once,” said Evelyn Yoshimura, Little Tokyo Service Center community organizing director, of visiting the Troy Café. “The reason I went is a friend called me up and said her son and his friends were going to perform at this place in Little Tokyo. We were really good friends, so I went, and it was packed. It’s funny because the group that played ended up being Queztal.”

To help tell the history of the Atomic and Troy cafés, the LTSC commissioned filmmakers Akira Boch and Tadashi Nakamura to complete a short documentary. Boch, originally from Northern California, can draw on his firsthand experiences at Troy Café.

“When I moved down to L.A. in 1994 is when the Troy Café was going really strong, and I lived downtown about seven blocks away or so in a loft,” Boch said.” The Troy Café was what I always — when I was younger — imagined a café should be like.”

Nakamura says they are hoping to receive grant money to complete the film. 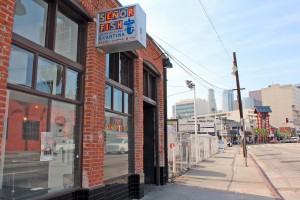 The historic building at Alameda and First Streets, now home to the Señor Fish restaurant, sits across from the Japanese American National Museum. Photo by Nalea J. Ko

“I think mainly we wanted to show that there’s all this history,” he said. “The Troy Café and the Atomic Café inspired other artists and was just this hub of arts and culture. I think it’s a really important story, and recently there has been media attention. But I think they’re more attracted to the punk side of it. And we really want to make sure that the Little Tokyo community element, the fact that Atomic Café was established by a Nisei couple after the war — I think that’s been lost in all the media attention.”

Nakamura and Boch plan to film additional interviews and footage at the Feb. 22 fundraiser, when Atomic Nancy will return to the former site of her family business to spin records for a new generation of Little Tokyo patrons.

“You know a lot of people still call me Atomic Nancy, even my age people,” Sekizawa said, breaking into a laugh. “But younger people don’t even know who the hell I am.”

A few days before her return to Atomic Café, Sekizawa told the Pacific Citizen(ITAL) that she was up until 2 a.m., practicing on her turntables.

“All of the things I remember, growing up as a little kid, whatever was in the jukebox at that time, whatever was really popular, I’ll be playing all that,” she said.

Her daughter, Zen, who also used to sleep in the Atomic Café booths as a child, will be at the event to cheer on Atomic Nancy.

“She grew up with the music. A lot of times I said, ‘I’m sorry I exposed you to so much weirdness.’ She says, ‘Are you kidding, mom? That was the greatest part of my life.’ I’m going, ‘Oh wow! All right!’”

For more information about the efforts to commemorate Atomic Café and Troy Café, visit www.facebook/RememberAtomicTroy.