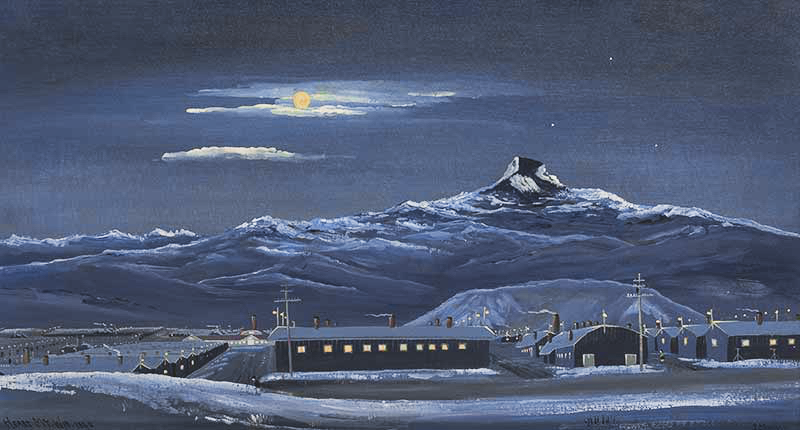 ‘Look Toward the Mountain: Stories From Heart Mountain Incarceration Camp’ 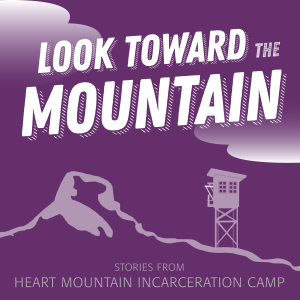 When I first visited Heart Mountain during the annual pilgrimage in the summer of 2018, I would not have guessed that several years later, I would be given the opportunity to produce a podcast series about the camp. Then again, so much of the last year has become unpredictable with the ongoing Covid-19 pandemic, which resulted in both a spike in anti-Asian violence and civil unrest in our country.

Amid such circumstances, society is quickly adapting to our new virtual world in ways that allow even the most disjointed communities to again become whole. Last summer’s “Tadaima! Virtual Pilgrimage” was a testament to the fact that Japanese Americans from around the country are seeking ways to connect and stay engaged with their community.

Like many organizations, the Heart Mountain Wyoming Foundation was planning a robust summer season of programs as part of its annual pilgrimage in summer 2020. These plans were sadly canceled given the social distancing safety guidelines.

However, HMWF was able to join together with the more than 60 organizations that helped produce “Tadaima!” under the joint leadership of the National Park Service and Japanese American Memorial Pilgrimages. Thus, the funding that HMWF was planning to use for its pilgrimage workshops and other activities became reallocated for a variety of multimedia educational tools.

Despite the many challenges that Covid has wrought on our society, it has also opened up new avenues of opportunity. A year ago, it would have been unthinkable for me, a Philadelphia resident, to be working on a project based in Wyoming. 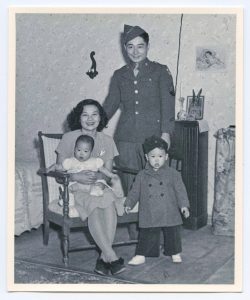 Yet, over the past six months, I have had the privilege of hosting and producing a podcast series telling the stories of Heart Mountain incarcerees in a degree of detail that has never been done in the podcast format before.

Titled “Look Toward The Mountain,” the name comes from a phrase used in Heart Mountain’s camp newspaper, the Sentinel, in its inaugural edition on Oct. 24, 1942. The editorial team revealed how they came up with their name in the following excerpt:

“Where did they turn for inspiration? They obeyed the age-old adage — ‘Look toward the mountains,’ Heart Mountain, of course, the natural source of spiritual and artistic inspiration.” 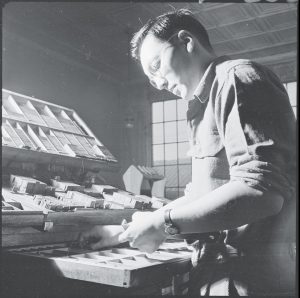 We chose this title because it references a unique story from Heart Mountain, as the Sentinel played an important role in daily camp life and is generally acknowledged as the highest-quality newspaper published in the 10 WRA camps. The editorial team’s reasoning also encapsulates the overarching theme that I am hoping to capture through this podcast.

The forced removal and wartime incarceration were clearly unjust racially motivated violations of our civil liberties that traumatized generations of Japanese Americans. But the camps themselves, and particularly Heart Mountain it seems, were places where community existed and even thrived, demonstrating the best of Japanese American innovation, creativity and resilience.

This series is not meant to tell the comprehensive story of wartime incarceration from start to finish, but rather focuses on the individual experiences that add depth to the understanding of what daily camp life was like for the people who lived through it. 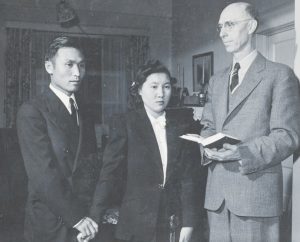 We do this by integrating audio samples from oral history recordings housed in the Densho collection, along with new interviews with Heart Mountain incarceration survivors. Inspired by the radio plays of the 1940s that would have been popular at the time of the incarceration, many written documents such as court testimonies, business and personal correspondence, newspaper editorials and diaries have been incorporated into the series with the help of HMWF Board Member Darrell Kunitomi.

Kunitomi is a Heart Mountain descendant and also a member of the Grateful Crane Ensemble, a musical theater performance troupe based out of Los Angeles’ Little Tokyo, who has helped source voice actors to bring the many text-based additions to life.

Ray Locker has been my partner in crime when it comes to researching and writing the scripts for narrating each episode. He has a background in journalism as a political correspondent at USA Today and has been a member of the HMWF team for several years. Locker’s journalistic approach helped to unearth a treasure trove of lesser-known stories from the camp years and others that deepen our understanding of well-known topics. 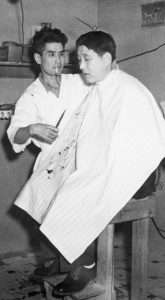 For my part, though I have spent much of my professional career studying and writing about topics related to the wartime incarceration, this was the first project I have worked on that necessitated such a detail of research into daily life in camp.

I have come away from it with a more nuanced understanding of the period and am equipped with even more reasons why this issue was such a travesty of justice. It has also given me great joy to make use of my skills as a musician to do some light soundtrack work on the series, including the theme song, which features both guitar and shamisen instrumentation — in what I hope evokes a blend of Japanese and Western tradition reflected in the lives of many incarcerees.

This project has not been without its challenges. For starters, living in a busy city like Philadelphia, finding ways to record high-quality audio without interruption from neighbors’ construction projects and passing traffic proved difficult. 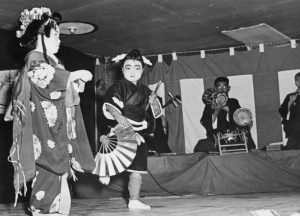 As someone who typically works in the written word, these were issues I had never dealt with previously. Not to mention the fact that my wife, Cathy, and I welcomed our first son, Mateo Masaki, into the world in mid-October. Finding time to record and edit each episode around his naps, feeding and changing schedule was also a challenge.

This project also challenged me to confront certain blind spots that I had in my knowledge of the camps, which was largely remedied by working with a variety of subject matter experts who leant us their perspectives whenever needed. I don’t want to give too much away, but I offer the following brief synopsis of some key topics discussed in the series.

Beginning with the first two episodes, we explore the origins of the Japanese American community — their immigration stories and first decades in the country prior to forced removal and mass incarceration at Heart Mountain, profiling the regions they came from and certain key individuals whose stories will be further expanded on throughout the series.

We also devoted an entire episode to the history of Northwestern Wyoming in the Bighorn Basin, where Heart Mountain was located, exploring the stories of the indigenous peoples who first inhabited the land and the white Americans who pushed them out during the Westward Expansion (including Wild West legend Buffalo Bill Cody) in order to better contextualize the setting of the stories to come. 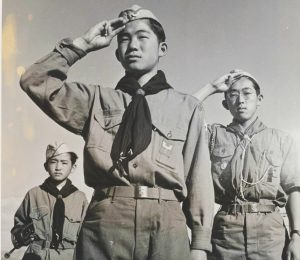 Episodes 3-5 of the series detail how the incarceree population established some sense of normalcy amidst the deeply traumatic experience by re-creating daily routines from their lives outside of camp — things like school, work, worship services, shopping and the like that give life its usual rhythm.

One of my favorite episodes is the fourth, titled “Prison Food,” in which we do a deep dive into food culture at camp and the many creative solutions incarcerees found to produce dishes that resembled their prewar diet.

Two episodes in the middle of the season presented my greatest personal challenge, as it required me to be objective in my description of JACL’s wartime collaboration with the War Relocation Authority.

Episode 6 explores the organized resistance to the draft by Heart Mountain’s Fair Play Committee, while Episode 7 tells the story of volunteers and draftees who enlisted to serve in the 442nd Regimental Combat Team. 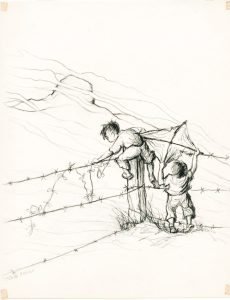 In these and other episodes, I was also confronted by my own bias related to a pivotal figure at Heart Mountain — Bill Hosokawa, editor-in-chief of the Sentinel newspaper. Although I never met Bill, he was a friend of my family for many years. Reading through his editorials while conducting research on camp life, I came to realize that I would have likely disagreed with many of his viewpoints, which during his years at Heart Mountain at least were decidedly assimilationist and generally touted government propaganda lines.

In addition to the episodes exploring the divisiveness that the government sowed with its so-called Loyalty Questionnaire and subsequent military draft, Episode 8 titled, “Crime and Punishment,” paints a somber picture of camp life as it investigates crimes that incarcerees inflicted on members of their own community.

The final two episodes of the season tell slightly more upbeat stories about how the community pursued creative interests in the arts and music, which both helped to pass the time and also helped many to process the traumatic events they were living through. 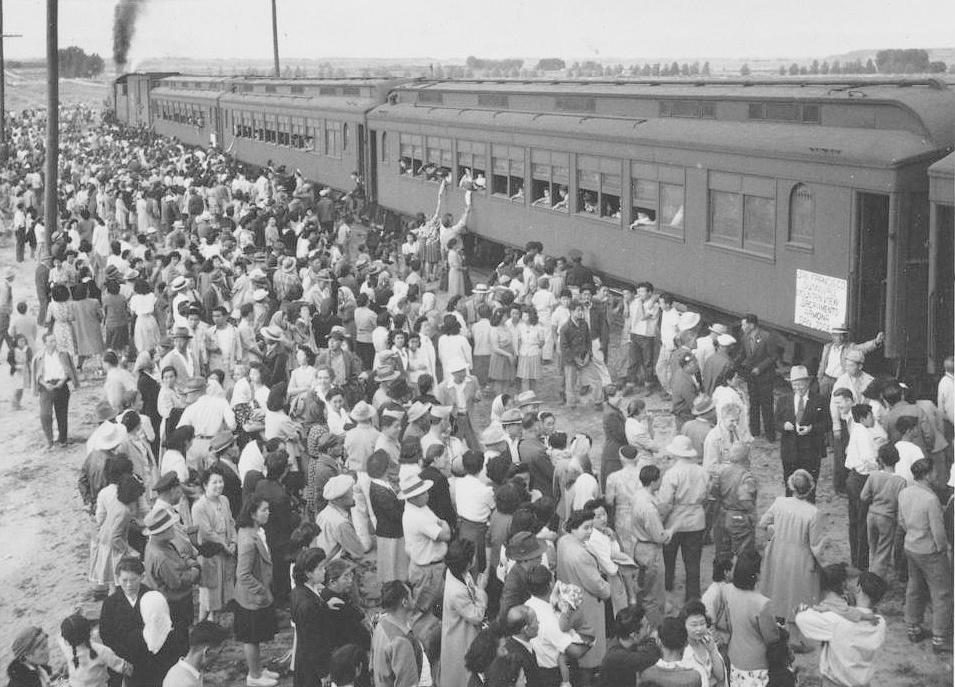 We also discuss the role that team sports, particularly football, had in unifying the Heart Mountain incarcerees around a common goal, encouraged by camp administrators who saw it as a means to further “Americanize” their inmates.

Even with 10 episodes that each run about an hour in length, we are still barely scratching the surface, with many stories left to tell.

“Look Toward the Mountain: Stories From Heart Mountain Incarceration Camp” podcast series is presented by the Heart Mountain Wyoming Foundation and is funded by the National Endowment for the Humanities. The first two episodes of the series will be released on Feb. 19, with subsequent episodes released in the weeks to come. The series is free and available to the public through Spotify, Apple Podcasts, Google Podcasts and other major podcasting platforms.