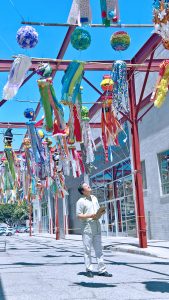 JACL National President Gary Mayeda served as a judge during the ninth annual Los Angeles Tanabata Festival, which was held during Nisei Week in Los Angeles’ Little Tokyo from Aug. 19-20.

The festival celebrates the Tanabata (Seventh Night of the Seventh Moon), which is celebrated all over Japan. It features the display of huge handmade kazari (decorations) at the Geffen Museum of Contemporary Art (MOCA) plaza.

The event, which was officially included during Nisei Week in 2009, is supported by the Little Tokyo Public Safety Assn., the Japanese Prefectural Association of Southern California and the Nisei Week Foundation. The Consul General of Japan in Los Angeles is the permanent honorary chairman of the festival.

More than 120 handmade kazari were entered in this year’s competition; all were judged in six categories including anime/manga, business, government, individuals/family, Japanese Prefectural Assn. and institutions/nonprofit organizations.

This years’ Founder’s Award winner, which consists of the overall winner from each of the six categories, was All Nippon Airways.