A Japanese TV reporter uncovers his family’s roots while at Heart Mountain.

Reporter Tadashi Ideishi was touring the Heart Mountain Interpretive Center on July 26 while preparing for a story for the Japanese NHK TV network when he saw a familiar face looking back at him from one of the center’s exhibits. 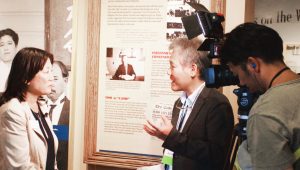 Shirley Higuchi, chair of the Heart Mountain Wyoming Foundation board of directors, speaks with NHK World reporter Tadashi Ideishi. Ideishi’s grandparents were incarcerated during WWII. Ideishi’s father, Hajime, was in Japan for school when the war broke out and never made it back to the U.S., where he had been born.

“There is my grandmother,” Ideishi said while looking at an enlarged photograph of one of the camp’s mess halls.

Asa Ideishi was 33 when she and her family were forced from their home in Santa Monica, Calif., and sent first to the Santa Anita Race Track in Arcadia, Calif., and then to Heart Mountain in Wyoming, where they arrived on Sept. 6, 1942.

She came with her husband, Shigeo, who was 49, as well as her brother-in-law, Yoshinori, 52, and two of their children, Mitsuru, 8, and Yasuko, 5. Yasuko sits next to her mother in the photo, while Shigeo had his back to the camera. 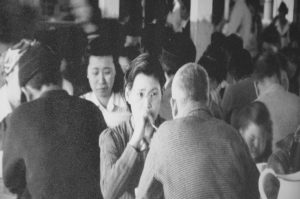 In this photo in the Heart Mountain Interpretive Center, Asa Ideishi looks toward the camera as she eats in one of the camp’s mess halls. Her grandson, Tadashi Ideishi, discovered this photo while visiting Heart Mountain to conduct interviews for his report on NHK World, a Japanese TV network.

After the Japanese attack on Pearl Harbor on Dec. 7, 1941, the Kibei in Japan were stuck. Hajime Ideishi, his son said, could not return to his family in the U.S. during the war, and when it was over, he remained in Japan, married and started a family.

The Ideishi family stayed in Heart Mountain until Oct. 20, 1945, just 20 days before the camp closed its doors. They then moved to Los Angeles, where they have remained since. Ideishi said his aunt and uncle still live in the area.