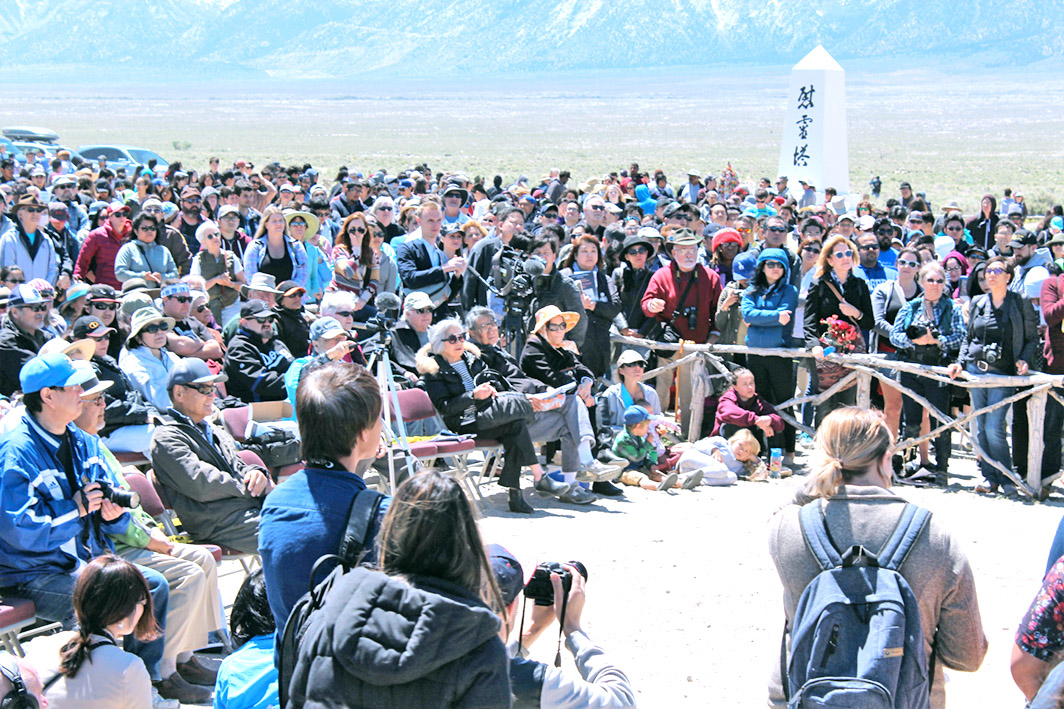 The attendance at this year’s 48th Annual Manzanar Pilgrimage was much larger than any in recent years, with a record-setting 2,000-plus participants gathered at the National Historic Site to pay homage to this year’s theme: “Never Again, to Anyone, Anywhere!”

The pilgrimage, which took place on April 29, commemorated the 75th anniversary of Executive Order 9066 by President Franklin D. Roosevelt, though “commemorate” should not be confused with “celebrate.”

There was nothing to celebrate in the executive order that brought about a time in the U.S. when the country did not live up to its democratic and constitutional values. It allowed a whole group of American citizens to be deprived of their civil rights and civil liberties based purely on their national origin and outright racism and segregated into concentration camps in desolate areas of the U.S. 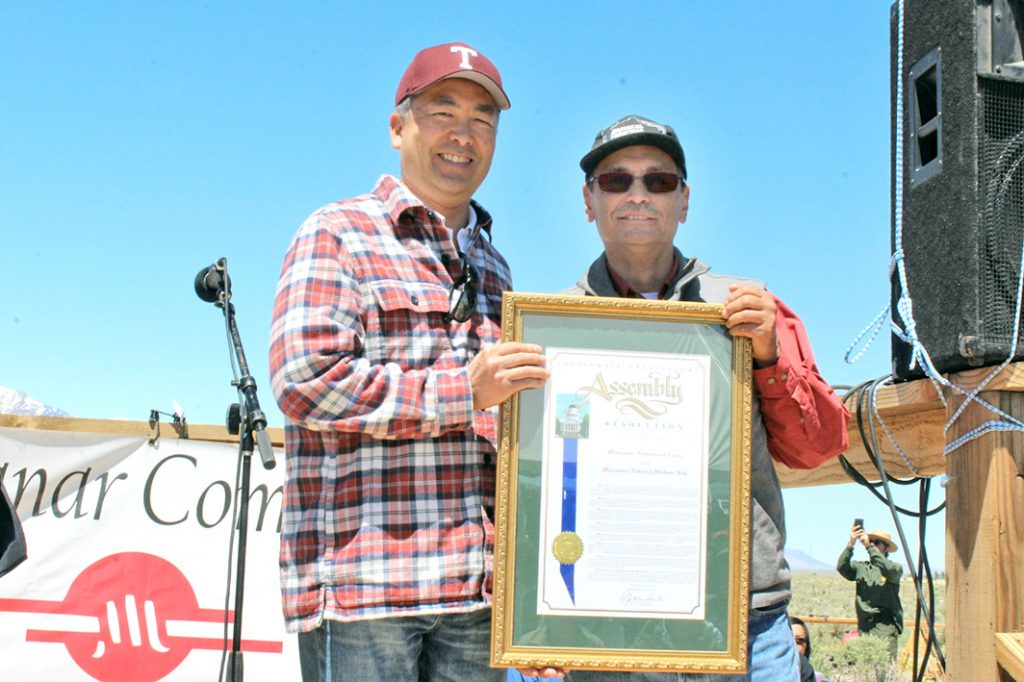 President Donald Trump promised to bring the country “together as never before” in his victory speech after winning the November election. If the large attendance, the words of the speakers and the comments of many of those attending the Manzanar Pilgrimage are any sign, it would appear that President Trump certainly has “brought the country together” — only that it is in opposition to his comments and policies that have singled out Muslims from several countries as a national security threat despite no supporting evidence.

It is feared that Trump and his administration are using language and attempting many of the same scare tactics that echo the same hysterical thinking that gripped the U.S. during WWII, allowing the country far too easily to fall susceptible to allowing oppression, hatred and fearmongering. The result back then was the creation of the Japanese American concentration camps, only now it is being directed at other groups because of their national origins, ethnicity and religion.

The WWII Japanese American concentration camp at Manzanar is located some 200 miles north of Los Angeles. This year’s pilgrimage was held on a beautiful day, with a clear blue sky, mild temperatures and moderate winds.

The towering and majestic granite, snow-capped peaks of the Sierra Nevada Mountain Range offered a picturesque backdrop to the pilgrimage ceremonies, yet it belies the tragic events that put more than 10,000 Japanese Americans and legal permanent residents of Japanese heritage behind barbed-wire fences in this remote location.

The often-extreme weather at Manzanar added to the misery of the camp’s incarcerees, who were forced to live in crowded, hurriedly built barracks that did little to keep out the stifling, simmering heat of summer or frigid blasts of winter winds or the dust from the ferocious wind storms.

In the words of Manzanar Committee Co-Chair Bruce Embrey, “There was a vicious, deliberate, despicable drive to make sure that these camps were sites of suffering.”

It was evident on approach of the main entryway to the Manzanar National Historic Site that something was “very different” this year.

The main parking lot was completely full — even overflowing — as cars and buses were beginning to park outside the entryway along the shoulder of Old Hwy 395. There were a reported record 13 large tour buses on site. Both large and small groups of people were scurrying about everywhere from in and out of the old camp auditorium-converted-to-museum and the barracks exhibits to hurrying along the pathways that led to the “Soul Consoling Tower” monument and cemetery — outside of which the pilgrimage ceremony was held.

The ceremony started with the always energetic UCLA Kyodo Taiko drummers, followed by a welcome from hosts Pat Sakamoto and Traci Ishigo. They, in turn, introduced Bernadette Johnson, superintendent of the Manzanar National Historic Site. Johnson assured the gathering that the staff and volunteers at the camp were committed to preserving its history and the stories of those incarcerated there. Johnson also informed the gathering that there were a record 105,000 visitors to the park in 2016.

Jun Yamada, consul general of Japan in San Francisco, then spoke of the hardships endured by camp incarcerees and of his past visit to Manzanar, during which he had the opportunity to talk with former incarcerees and Nisei veterans. He said it had a great impact on him. Yamada evoked laughter from the crowd several times with his modest, good-natured humor.

Another guest speaker, State Assemblyman Al Muratsuchi, rode a bus with others from the Gardena Valley Japanese Cultural Institute to the concentration camp. He presented Resolution ACR 1, which establishes the 75th anniversary of President Roosevelt’s signing of Executive Order 9066 as a Day of Remembrance in California to the Manzanar Committee. Muratsuchi’s wife, Hiroko Higuchi, and daughter also joined him on the trip.

Other speeches followed, some of which expressed outrage and defiance at the seemingly similar conditions that led up to the concentration camps during WWII and the current political atmosphere being touted by the current Trump Administration, which appear to be attacks on the most vulnerable and marginalized — the Muslim community, immigrants, refugees and LGBTQ community.

Embrey gave a blunt assessment of the current political climate that appears to be attempting to re-create the hysteria, fear, racism and injustices that were visited upon Japanese Americans.

In recalling the harsh living conditions of the camps, Embrey said that “the people here were going to be isolated psychologically and physically, far from civilian populations, in desolate areas intended to make people suffer and to humiliate them.” He finished by saying, “Never again!”

After Embrey’s speech at the podium, the Manzanar Committee Sue Kunitomi Embrey Legacy Award was presented to Alan Nishio by Embrey and Jenny Chomori in recognition of his more than 40 years of advocacy on behalf of civil rights.

Former California State Assemblyman and longtime community activist Warren Furutani was the featured speaker at the pilgrimage. He was critical of the current political atmosphere. The best way to counteract the latest fear-mongering and threats to civil liberties, he said, was to not ignore it, but rather stand up to it … and vote. He warned against the despotism and fascism that seems to be threatening the country.

An interfaith service also was held at the monument, and as the crowd began to break up, an Ondo Dance began as visitors started their trek back to their cars and busses. Naturally, they were walking against a brisk wind. After all, this is Manzanar.