The bipartisan legislation seeks to permanently reauthorize the JACS program. 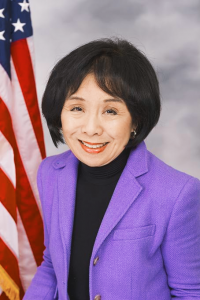 The Japanese American Confinement Education Act would permanently reauthorize the JACS program within the National Park Service, which is currently set to expire in 2022.

This program has been one of the primary resources in the preservation and interpretation of the U.S. Confinement Sites where Japanese Americans were detained during WWII.

This grant would require the recipient museum to develop and nationally disseminate accurate, relevant and accessible resources to improve awareness and understanding of Japanese American Confinement in WWII.

Just over 75 years ago, the U.S. Federal Government, through Executive Order 9066, rounded up and imprisoned 120,000 Japanese Americans. Based solely on race, Japanese Americans were stripped of their homes, possessions and civil liberties and forced to live in remote military barracks. Yet, as time passes, the memory of mass, wrongful government roundup of innocent American citizens has grown increasingly distant.

“The imprisonment of Japanese Americans during World War II will forever be one of the most atrocious violations of American civil rights in the 20th century. Those of us in the Japanese American community know too well what discrimination feels like, what kind of mark it leaves and, most importantly, what we can do to stop it,” said Matsui. “The Japanese American story is one that is not told nearly enough. It is one of pain, one of redemption and one of enrichment.

“This bill will ensure that these lessons live into the future — that we continue bending the moral arc of this country by sharing these stories, lifting our voices and fighting so that we do not repeat the mistakes of the past,” Matsui continued. “The essence of the American experience isn’t that we’re perfect, it is that we heal from seeing where we’ve been and teach our younger generations to build a more inclusive, equitable future.”

Other lawmakers joined in with their support of Matsui’s bill as well.

“My parents and grandparents were imprisoned in Japanese internment camps during World War II while my Great Uncle Monso was fighting the war in defense of this country,” said Rep. Mark Takano (D-Calif). “This was a dark time in our nation’s history, but in order to move forward, we must not forget the lessons of the past. For that reason, I am proud to support the Japanese American Confinement Education Act to preserve the Japanese Confinement Sites and create an educational competitive grant to help educate younger generations about the unjust incarceration of Japanese Americans.”

“The forced internment of our fellow citizens through Executive Order 9066 is one of the darkest chapters in American history. The fact that it occurred during my lifetime highlights just how fresh of a wound this is for Japanese Americans across our country,” said Rep. Don Young (R-Alaska). “ … Tragically, many of our young people no longer study this terrible moment in history, which puts our ability to learn lessons from this era at risk. … If we do not acknowledge, reconcile and learn from our history, we are doomed to repeat it. … It is my great hope that we take these lessons to heart and honor the families who were devastated in the very country they called home.”

“I’m honored to support Congresswoman Matsui’s Japanese American Confinement Education Act, which would help ensure that generations of Americans know about the dark legacy of U.S. Confinement Sites,” said Rep. Grace Meng (D-N.Y.). “… While we have taken steps to memorialize and atone for this wrong, we must make sure that future generations also know of this painful history.”

“I am honored to co-introduce this measure to assure that all Americans know and understand one of our country’s darkest chapters, a chapter that saw our leaders committing and justifying a historic wrong against our Constitution and peoples of all races,” said Rep. Ed Case (D-Hawaii). “This chapter spared no part of our country, including my home state of Hawai’i, where, despite generations of loyal and constructive contribution, hundreds of Japanese Americans were interned at camps like Honouliuli, an only recently rediscovered site now memorialized as a national monument. It is only by knowing and understanding what happened and why that we can recognize future warning signs and avoid ever repeating this dark history.”

“When Representative Robert Matsui and I were lobbying to pass the Civil Liberties Act of 1988 along with Senators Daniel Inouye and Spark Matsunaga, our goal was to have the United States government acknowledge its mistake in illegally forcing thousands of people of Japanese ancestry from their homes and businesses to be imprisoned during WWII,” said Sec. Norman Mineta. “While the government apology and redress payments were essential elements of that bill, we all knew that educating the American people on the Japanese American WWII experience was of vital importance to ensure that no other group is similarly targeted. The original Japanese American Confinement Sites program was a continuation of the educational process to preserve our history and share this story with future generations. Rep. Doris Matsui’s bill, the Japanese American Confinement Education Act, enables the National Parks Service to maintain its successful outreach program about a story that all Americans should learn to ensure that this shameful chapter in our history is never forgotten and never repeated.”

“The Heart Mountain Wyoming Foundation strongly supports the Japanese American Confinement Education Act, which will enable us to preserve sites where more 120,000 people were unfairly incarcerated during WWII,”  said Shirley Ann Higuchi, chair of the Heart Mountain Wyoming Foundation. “It will educate the country and the world about the need to prevent something like this from happening again.”