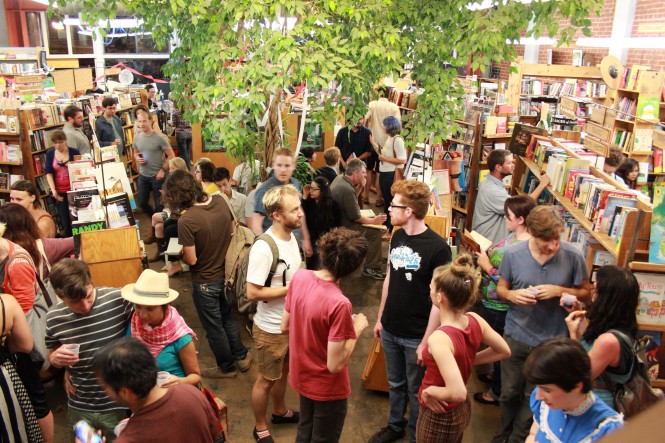 Skylight Books a small cozy general bookstore in Los Feliz, Calif. hosted a midnight launch part for Haruki Murakami’s latest book “Colorless Tsukuru Tazaki and His Years of Pilgrimage.” Murakmai published the book in his native country of Japan in April of last year where it became a bestseller, selling millions the first week.

Now translated in English, booksellers across the United States hosted midnight release parties like Skylight Books. The iconic bookstore standing in the shadows of Griffith Park and surrounded by the architecture of Frank Lloyd Write, R.M. Schindler and Richard Neutra welcomed fans and readers of Murakami with 45 autographed copies. At 10 p.m. Skylight opened their doors with live music along with wine and other refreshments as lines snaked through the bookshelves. Each customer was allowed to purchase only two copies and unlimited additional unsigned copies.

Murakami’s formidable international career is apparent, as store employees were surprised at the large turn out.

“We’ve had other midnight releases,” said Skylight Books Event Manger Mary Williams. “But this turnout is wonderful and I didn’t expect it to be so big.”

Such a turnout is hard to ignore as the contemporary Japanese writer has his works translated into 50 languages. His numerous awards both in Japan and international include the World Fantasy Award, the Franz Kafka Prize and Jerusalem Prize.

“Colorless Tsukuru Tazaki and His Years of Pilgrimage” digs deeper into Murakmai’s signature fantasy and reality fiction writing. The story follows a young man Tsukuru Tazaki who is haunted by a great loss. Dreams and nightmares surface with unintended consequences around Tazaki’s world as his past attempts to mend the present.

According to NPR’s Meg Wolitzer the writes in her review that “the novel feels like a riddle, a puzzle, or maybe, actually, more like a haiku: full of beauty, strangeness, and color, thousands of syllables long.”

Even still Skylight Books like others across the United States experienced overwhelming interest in Murakami’s writing. Readers eager to take a stab at Murakami’s “puzzles” and “haikus” waited for the clock to strike 12:01 am for their hardcover book and a chance for the first 45 signed copies.