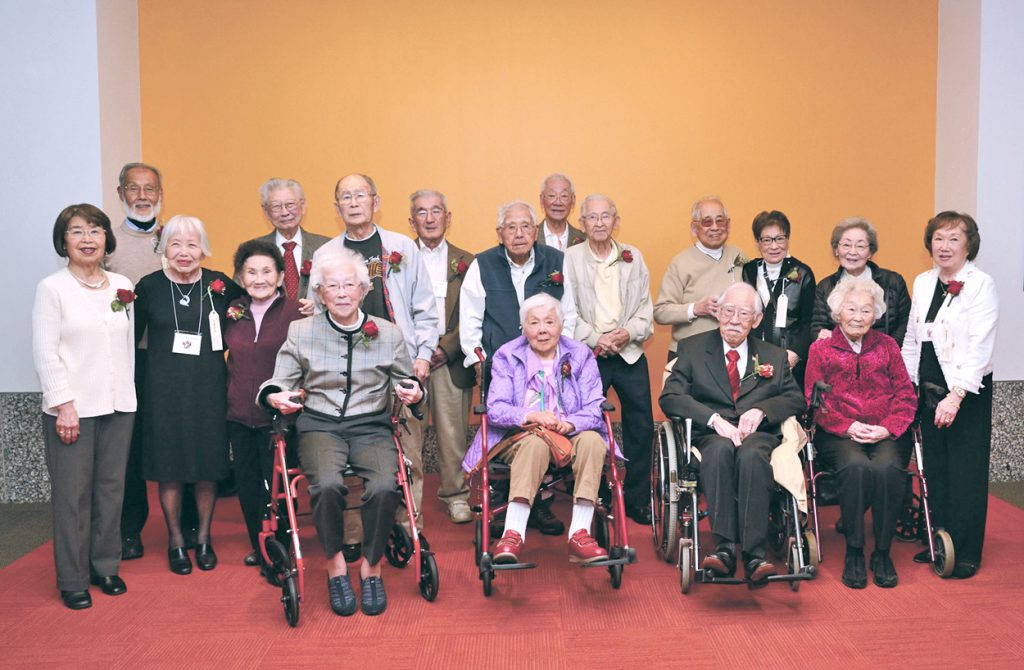 The DOR event also featured a candlelight ceremony to recognize those unjustly incarcerated during WWII and veterans that served in the U.S. military.

The program was titled “February 19, 1942: A Day the Constitution Died. Could It Happen Again?” in an effort to remind the audience how wartime anti-Japanese racism was a symptom of a pathology that is flaring up today, but directed at Muslims.

Dr. Gordon Nakagawa served as the event’s emcee. MNHS Director/CEO D. Stephen Elliott also talked about the relevance of history to teaching about the past and its implications today, as well as acknowledged the organization’s connection with the Japanese American community because of Historic Fort Snelling, an MNHS-maintained site, which housed the Military Intelligence Service Language School during World War II.

Judge Susan Burke of the 4th Judicial District in Hennepin County and the first Japanese American judge in Minnesota introduced the theme with remarks about the Constitution, and she reminded the audience that the Constitution guarantees freedom of religion, due process and equal protection.

Following Burke’s remarks, a candlelight ceremony was held to recognize the 10 War Relocation Authority camps, the camps in Hawaii, the Department of Justice camps, along with the MIS, 100th Infantry Battalion/442nd Regimental Combat Team and draft resisters. Attendees that were camp survivors or veterans and their family members also were asked to stand and be acknowledged.

In a powerful script written by members of the Twin Cities JACL Education Committee, narrated by poet and author David Mura and directed by Rick Shiomi of Full Circle Theater, 22 community members added their voices as readers.

They depicted figures prominent during this time, such as President Franklin D. Roosevelt and Lt. Gen. John DeWitt, and recited actual testimony of camp survivors and Japanese American World War II veterans as slides of camp photographs and other wartime experiences were shown in the background.

Included in the readings were testimonies by Muslim Americans of injustices they have suffered post-9/11, and slides showing the recent increase in hate crimes.

A Statement of Solidarity, released by the TCJACL and Council on American-Islamic Relations in Minnesota, was included in the program. In that statement, the TCJACL and CAIR-MN pledged to “stand together to resist the current forces of oppression that join our communities’ histories.”

In addition to the official proclamation by Gov. Mark Dayton, the Minnesota House and Senate both passed resolutions, authored by Rep. Rod Hamilton and Sen. Sandra Pappas, respectively, to recognize the 75th anniversary of Executive Order 9066.

Unable to attend the event, Sen. Amy Klobuchar submitted a letter that included her assurances that “as we face an uncertain world today, we must steel our resolve. We all must do our part. We should tell their stories and reflect on what happened, and how it happened. No matter what, I will continue to stand up for what’s right. And I know you will, too.”

Attendees received a replica of the incarceration identification tag, each printed with a different number, with the phrase “Nidoto Nai Yoni” (Let It Not Happen Again) on the back. All attendees also received pocket-sized copies of the Constitution, donated by the Minnesota American Civil Liberties Union.  JACL National Education Committee curriculum guides were distributed to educators.

Poetry trees, created by University of Minnesota students Marilyn Keo and Jason Dawson for their final project in a course on the Japanese American incarceration taught by Yuichiro Onishi and John Matsunaga in fall 2016, were displayed at the event.

The program was funded by a grant from the JACL Legacy Fund, and donations the Les and Karen Suzukamo Fund and the Donald S. Maeda Memorial Fund.