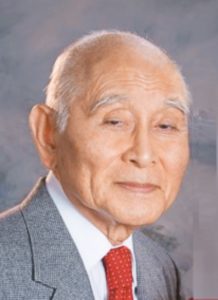 During a Town Hall meeting in Sunnyvale, Calif., on Aug. 24, Congressman Ro Khanna posthumously presented the Congressional Gold Medal award to the family of Shunso Frank Watanabe for his service in the Military Intelligence Service during World War II.

Joining this ceremonial portion of the meeting were officials from the Consulate of Japan in San Francisco, including Consul General Tomochika Uyama, Consul Ryosuke Kamono and Vice Consul Ryo Aono. Consul General Uyama congratulated the Watanabe family and expressed his pleasure to attend the ceremony.

Accepting the award on behalf of Watanabe, who passed away on June 18 (the same day that the congressman’s office received confirmation that he would be receiving the award), were his daughter, Alysa Sakkas, president of the Cupertino Toyokawa Sister Cities, and 20 other family members.

In talking about the circumstances that led to the delay in Watanabe receiving his medal, Sakkas said: “We don’t know much about my dad’s time serving in the Military Intelligence Service because he never talked about it.”

In 2010, President Barack Obama granted the Congressional Gold Medal to Nisei servicemen, collectively to those who served in the 100th Infantry Battalion, the 442nd Regimental Combat Team and the Military Intelligence Service.

Sakkas recalled that she asked her father at the time why he wasn’t invited to the ceremony, which was held in Washington, D.C. He replied, “I don’t know. Maybe I didn’t serve long enough time.” 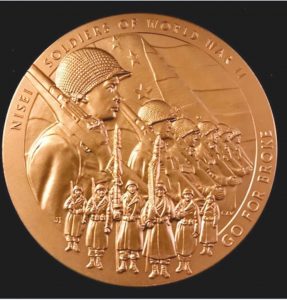 In the process of connecting with the Veterans Administration early in 2018 to seek available services for her ill father, Sakkas discovered that Watanabe’s Army personnel records were destroyed in a 1978 fire.

“They (the VA) had no record of my father’s service,” Sakkas recalled, to audible gasps from the audience.

Therefore, Sakkas sent a copy of the discharge orders Watanabe had saved to the VA and also to Congressman Khanna’s office, requesting if they could look into whether her father had been overlooked to receive the Congressional Gold Medal.

When Sakkas told her father, he humbly told her, “It was SO long ago, no one cares about that — just forget it.”

And so Sakkas stopped further pursuit. 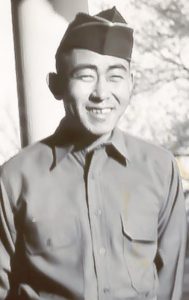 Watanabe passed away on the very day that Congressman Khanna’s office called with the news regarding the forgotten inquiry. Khanna’s office had determined that Watanabe should have received the Gold Medal award.

The day before the belated ceremony to posthumously present the award, the Watanabe family also learned of an additional tribute to Shunso Watanabe: Consul General Uyama’s office sent a photo of the name  Shunso F. Watanabe that is inscribed on the MIS  Historic Learning Center in the Presidio of San Francisco.

No one in the family was aware that it had been there since the center’s opening in 2014.

Sakkas ended her remarks by saying, “Dad was always a very quiet and modest person, but I know he is here with us today, in spirit. Thank you again for the recognition for him, for our family and for the many other people who served in the Military Intelligence Service.”

Congressman Khanna concluded the ceremony to say, “This is a recognition from the United States government and it is a recognition of your father being a true American hero and his story being the best of what America represents.”