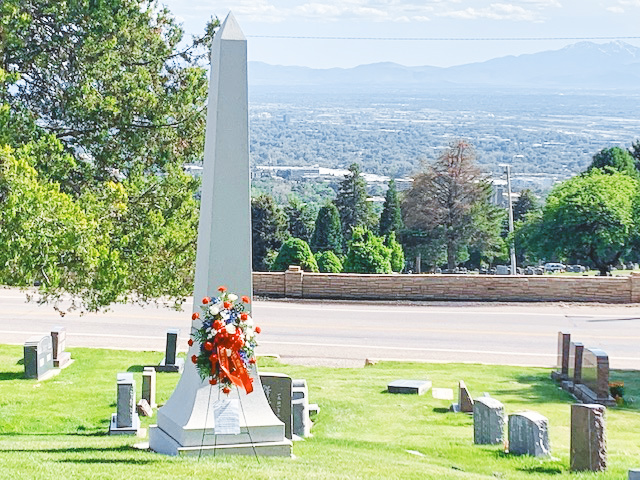 Because of the coronavirus and stay-at-home orders, most JACL chapters have not been holding activities or even board meetings. The Mount Olympus JACL chapter in Utah did not meet for its March board meeting since its major spring event had been canceled, and people were not supposed to venture out of their homes except for essential items because of the pandemic.

The April board meeting was held over the phone.

However, since the stay-at-home restrictions were eased somewhat in the middle of May for most of Utah, Mount Olympus JACL Chapter President Dick Mano decided to hold a board meeting at the Salt Lake City Cemetery. Board members were invited to clean up the Japanese section of the cemetery, followed by a short board meeting. This was in anticipation of the Memorial Day weekend.

Besides the regular matters for the board to discuss, the chapter also held a drawing. Because the Fund-a-Rama, the chapter’s major fundraising event for the year, which normally benefits the scholarship fund, had been canceled, the chapter held a drawing since some of the prizes had already been gathered and tickets had been issued before the cancelation.

Mano returned to the cemetery a few days later to place a beautiful floral arrangement at the site of the monument erected in honor of the Japanese American veterans who were serving in the military when they died in World War II. The floral and written tribute to the veterans was from the Utah chapters of the JACL. 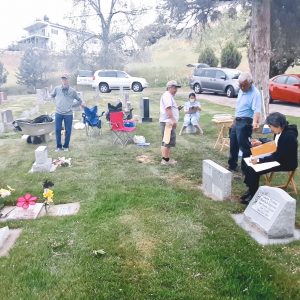 The Mount Olympus JACL chapter held its board meeting at the Salt Lake City Cemetery and did a service cleanup of its Japanese section. (Photo: Courtesy of Floyd Mori)

Usually joining with the JACL chapters have been the Dai Ichi Ward of the Church of Jesus Christ of Latter-day Saints, the Japanese Church of Church and the Salt Lake Buddhist Temple.

Most of those killed and honored whose names are listed on the monument were members of the 100th Infantry Battalion/The 442nd Regimental Combat Team and the Military Intelligence Service. These U.S. Army units of WWII were honored with the U.S. Congressional Gold Medal of Honor in 2010. These Japanese American veterans have often been credited with helping to usher in the civil rights movement because of their heroism, patriotism and valor.

Many decades ago when the people of Japanese descent died in Salt Lake City, they were not allowed to be buried in the main part of the Salt Lake City Cemetery but were assigned plots far away from the major portions of the cemetery. The main part is an area that is across the street from and below the monument for the Japanese American veterans. The Japanese section looks like a nice area now, but it was originally the undesirable part of the cemetery. Adjacent to the Japanese section is an area of Chinese graves.

It would be hoped that the racism of those years long gone would also have disappeared. Unfortunately, it is still with us and needs to be addressed. We must be ever vigilant in order to not let history repeat itself with regard to the egregious mistreatment that Japanese Americans received before, during and after WWII.

Floyd Mori was born and raised in Utah. His oldest brother, Shigeru Mori, has his name on the Utah Veterans’ Monument at the Salt Lake City Cemetery. Floyd Mori is a member of the National Veterans Network and worked on securing the Congressional Gold Medal awarded to Japanese American Veterans of WWII.