She becomes the first Buddhist to lead the city. Her family has long ties with the temple and BCA.

Mountain View Buddhist Temple member Ellen Kamei, whose family has long ties with the temple and the BCA, made history when she was selected as Mountain View’s mayor — becoming the first Buddhist to lead the city. 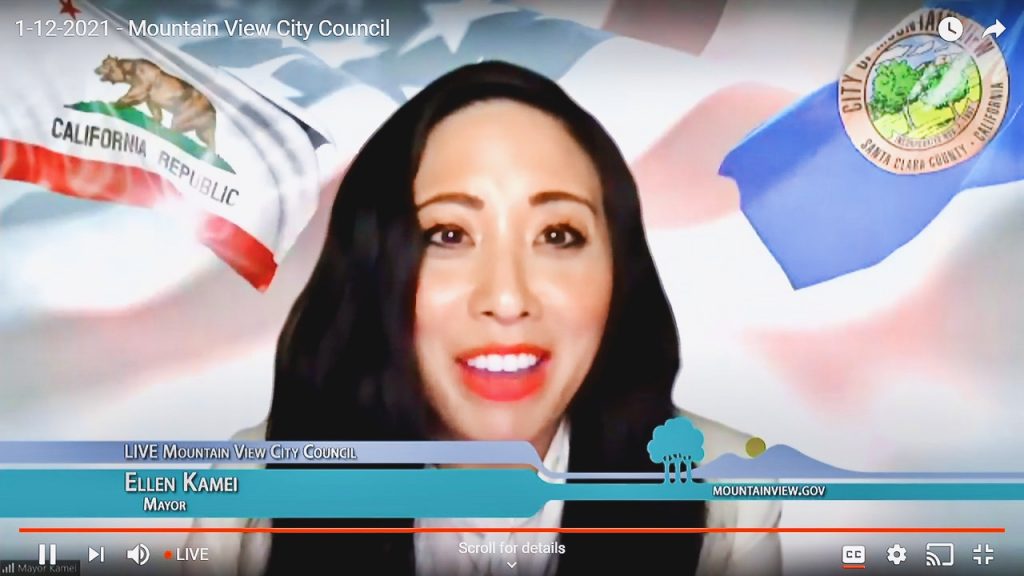 Ellen Kamei was chosen unanimously as mayor of Mountain View, Calif., by her colleagues at the City Council; she served previously as vice mayor.

Kamei, who was elected to the Mountain View City Council in 2018, was unanimously chosen by her council colleagues as mayor on Jan. 12. Before that, she served as vice mayor in 2020 alongside former Mayor Margaret Abe-Koga. It’s believed that Abe-Koga and Kamei were the first Japanese American female mayor and vice mayor, respectfully, in the mainland United States.

“I feel renewed hope for 2021,” she continued. “The road ahead is still long, and there is much work to be done. Yet, I am heartened by the path of public service to the community that I learned through my experience as a temple member.”

Kamei was born and raised in Silicon Valley, the daughter of a first-generation Chinese and Puerto Rican American mother from New York City and a third-generation Japanese American father born at Heart Mountain internment camp in Wyoming. She is also multilingual and can speak Spanish, Japanese and Mandarin.

Her grandparents, Kenzo and Ruth Kamei, met in Mountain View, and her grandfather later owned his small business as a flower grower and passed the tradition on to her father.

“The nursery was first located in Mountain View, and I would spend many days with them at their home in Waverly Park, planting the seeds for my roots in the city,” Kamei said in her biography on the city of Mountain View website.

The Kameis later moved their nursery to Morgan Hill.

Kamei was an active member of both the Morgan Hill Buddhist Community Center and San Jose Buddhist Church Betsuin, where she participated in Girl Scouts, Jr. YBA, Judo and Suzume No Gakko. She served as a Dharma School assistant during high school and participated in the Padma Program.

After completing her undergraduate studies at UC Santa Barbara, she went to the Mie Prefecture of Japan as a Japan Exchange and Teaching (JET) Program assistant language teacher, where she taught kindergarten, elementary and middle school for two years.

When Kamei moved back to California after graduate school, she moved in with her grandfather and became a board member of the Japantown Community Congress of San Jose.

In November 2019, Kamei was proposed to by Chris Takeuchi in front of the garden at the Mountain View Buddhist Temple. Kamei and Takeuchi were recently married in the same spot in October 2020 under Covid-19 restrictions.

“I am really proud that Ellen, a member of the MVBT, was inaugurated as mayor of the city of Mountain View in January,” Rev. Mukojima said in a statement. “It was an amazing and historic event for several reasons: She is a woman, Japanese American, and Mountain View’s first Buddhist mayor.

“Buddhism emphasizes the teaching of equality and, just as Buddhism has been supported by countless wonderful women, Ellen shows us clearly how our community is sustained by many women leaders,” Rev. Mukojima continued.

“I also believe that Ellen’s great achievements will give the young people in our Sangha both courage and hope about America’s future,” Rev. Mukojima said. “I sincerely hope that, with Ellen as our role model, we can realize a wonderful world where all women are proud of and confident in their talents and abilities and will not be afraid to become leaders who contribute to the well-being of their community and the world. We stand together in full support of Ellen in her new challenges. Again, congratulations, Ellen!”

(Editor’s Note: This article originally appeared in the Wheel of Dharma newspaper and has been reprinted with permission.)