My Country: Our Battle

It is not all about being pro-choice. The battle for women’s reproductive health is a much larger issue that all Americans should be fighting for, especially minorities.

Lawmakers looking to push their own beliefs onto women and doctors have recently increased their attacks on health care centers that provide critical cancer screenings and services for women. That should come as no surprise, as less than 20 percent of Congress is made up of women.

Women and minorities are underrepresented in Congress, and that’s why we need to take further action to protect women’s reproductive rights. Women’s health centers, especially those that provide abortions, have been under attack from Targeted Regulation of Abortion Providers (TRAP) laws. 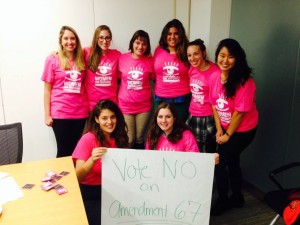 Planned Parenthood Metropolitan Washington, D.C., Action fund made phone calls urging Coloradoans to vote no on Amendment 67 because government shouldn’t be able to interfere with how and when a woman chooses to start a family.

TRAP laws single out the medical practices of doctors who provide abortions and impose unfair requirements that are not applicable to other medical practices. These clinics usually offer education, family planning services and preventative services for women and girls.

A friend who works for Planned Parenthood explained to me that TRAP laws could shut down a clinic for petty reasons like narrow hallways. No matter if you’re pro-life or pro-choice, I think we can agree that we are all pro-health.

Reproductive justice is a movement for the complete physical and mental well-being of women and girls; it strives for economic, social and political equity.

Narrow hallways and narrow minds should not stop its progress.

The Office of Women’s Health (OWH), a division of the U.S. Department of Health and Human Services, reported that Asian Americans are sometimes stereotyped as the “healthy minority . . . although Asian Americans have many real and serious threats to their health, including cancer, heart disease, diabetes and tuberculosis.”

Those living in poverty or those who have limited English proficiency have poor access to health care.

According to the Agency for Healthcare Research and Quality, “The percentage of women who indicated that their provider did not include them in making decisions about their care was higher for Asians than for Whites” in 2008.

Asian American women are also much less likely to get routine Pap tests than women in other groups according to the OWH.* Our community needs to take a personal and political stand for women’s health.

Minorities are often targeted or disproportionately affected in laws concerning women’s health. Earlier this year, the debate on abortions later than 20 weeks of pregnancy came up in Congress. The Centers for Disease Control and Prevention reports that only one percent of abortions in the U.S. are performed after 20 weeks of pregnancy. That one percent disproportionately affects females that are “teenagers, poor, African-American and with lower education attainment than women who have first-trimester abortions,” wrote the Huffington Post.

The closing of health centers that offer abortions has also limited services logistically. Travel time, costs and multiple trip requirements (some of which were made to keep women from care) have restricted the ability for women to visit clinics. This is especially difficult for women who already have children and need to take off of work and find child care.

“Women who suffer from poverty, domestic violence, medical and psychiatric illness, abandonment, rape and other forms of reproductive coercion . . . have the greatest medical need,” wrote the Huffington Post.

These factors contribute to late abortions and are a clear example of how laws can unreasonably hurt minorities or at-risk communities.

Luckily, the Affordable Care Act (ACA) has made great advancements for women, youth and families. Breast and cervical cancer screenings as well as contraception coverage is now accessible. ACA has also made cost equity a reality.

Although the ACA has done much to improve the status of women’s health, it has failed to make emergency conception care and education available to women
without charge.

Sen. Patty Murray (D-Wash.) recently introduced “The 21st Century Women’s Health Act.” The new bill “would mandate state Medicaid programs to provide full coverage for all forms of birth control, require hospitals and clinics to provide free emergency contraception to patients who have been sexually assaulted and order a study of how states are enacting laws to restrict access to abortions and other family-planning services,” wrote the Seattle Times. This bright spot is worth highlighting, but this bill will not move forward without the voices of those who believe in reproductive justice.

I hope that more Asian Americans and Pacific Islanders take a stand for women, girls and families who are looking for support, education and equity. We need to take action. Here are a few ways you can join the fight:

1. Stay Informed — Keep up with local and national policies by signing up for newsletters that highlight news concerning women’s health.

2. Volunteer — Educate your community about women’s health issues, join political action groups or work at a women’s health center. The opportunities are limitless.

3. Talk to Friends and Family About Your Thoughts — You’re more influential than you think! Go a step beyond and write or call those who represent you in Congress.

4. Donate — Give to organizations that support women’s health.

*The National Breast and Cervical Cancer Early Detection Program provides free or low-cost Pap testing to women who don’t have health insurance. To learn more about this program, please contact the CDC at (800) CDC-INFO (232-4636).

Rhianna Taniguchi is an aspiring social engineer in Honolulu, Hawaii. She was the 2014 JACL Norman Y. Mineta Fellow.