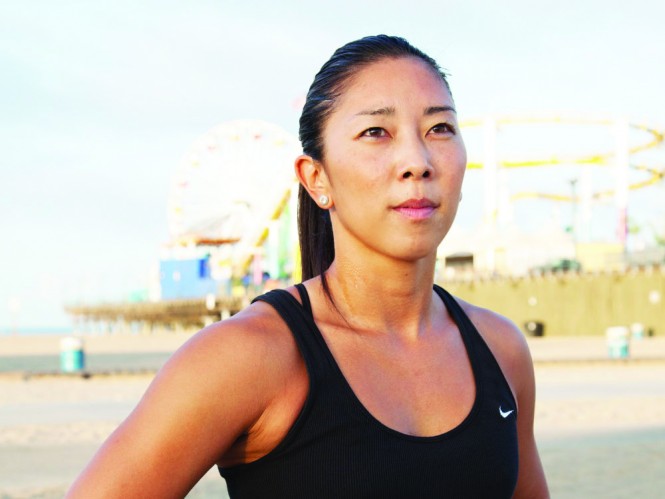 Natalie Nakase Paves Her Own Path On and Off the Court

The video coordinator intern for the Los Angeles Clippers knows it takes more than hard work and dedication to realize her lifelong dream of becoming the first female coach in the NBA.

For Natalie Nakase, basketball encompasses almost every moment of her life. A typical day consists of getting in to work early in the morning, sometimes between 6:30 a.m. and 7 a.m. She’ll work on breaking down videos of past games throughout the day and visit the gym during practice, watching the players make shots on the court or practice passing. At night, she might be on call if something comes up for the coaching staff or if a player is in need of her assistance. 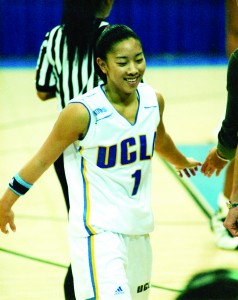 Natalie played basketball for the Bruins while she attended the University of California, Los Angeles. Photo courtesy of Natalie Nakase

As a video coordinator intern for the Los Angeles Clippers, Nakase puts in long hours in her work to support the coaches and the players of the NBA team. For Nakase, it’s worth it — it’s all a part of her journey to become the first female coach in the National Basketball Assn.

Nakase began playing basketball early on with her family. A third-generation Japanese American, Nakase grew up in Huntington Beach, Calif., with two older sisters, Norie and Nicola. All three girls were encouraged to play basketball at a young age.

“My dad is a huge sports fan, but he loves basketball,” Nakase, 34, said. “He loved it, so it was a chance for me to bond with my dad. I just instantly kind of fell in love with the sport, and he just watched and played all the time, too.”

Apart from playing basketball with her siblings, she joined the Japanese American basketball youth leagues.

“Starting something like that really gave me a sense of being a Japanese American and having kind of like a second family,” Nakase said.

Playing basketball allowed her to bond with her father, Gary Nakase, and she counts him as one of the people she admires the most. 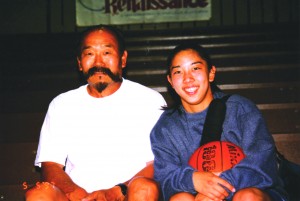 Playing basketball allowed Nakase to bond with her father, Gary, whom she counts as one of the people she admires most in her life. Photo courtesy of Natalie Nakase

“As I started getting older, we always had to travel around for tournaments, and I would always be with my dad. I would observe my dad a little bit more than just my friends, and he worked really hard — that was something I think he instilled in me because every day he would work,” Nakase said. “The weekends were considered work for him; he had a family business, and he was never big on family vacations when we were younger, so basketball ended up being year-round for me. So, that was a huge thing.”

After graduating from Marina High School in Huntington Beach, Nakase attended the University of California, Los Angeles, where she made her mark on the basketball team and was already described then as “like a coach on the floor.” Her basketball career eventually took her overseas, where she was the first female coach in the Japanese professional men’s basketball league: She was a volunteer assistant for the Tokyo Apache, where she worked with former NBA coach Bob Hill, and coached the Saitama Broncos.

“My first year, I was assisting a former NBA coach, so that was why it triggered me to want to coach in the NBA — I started to learn a completely different part of coaching that I never experienced,” Nakase said. “I remember just learning from the other coaches to be prepared for anything: Be prepared for the next step.” 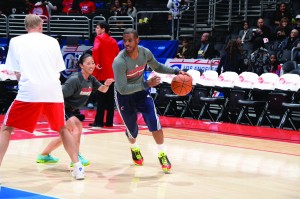 Even though she enjoyed coaching in Japan, Nakase’s dad pushed her to pursue her dream of working in the NBA. She contacted everyone she knew in the organization and worked the NBA Summer League, but didn’t have any luck in securing a position. On a fluke, she decided to attend a Clippers coaching clinic with a friend and ended up meeting Dave Severens, one of the current assistant coaches of the Clippers, who she peppered with questions about the NBA.

After the two-hour clinic, Nakase asked if she could attend a workout with Clippers power forward Blake Griffin. He said yes to her request, and Nakase went to the gym the next day with her arms full of notebooks and pens.

“I was so excited to come into the facility and watch an NBA player work. And then that’s when [Griffin] introduced me to other people, and I asked, ‘Do you guys need help? I know video.’ I knew video was the direction that I wanted to go,” Nakase said. “It took me two to three weeks. I kept coming back every day because they allowed me to come back every day, and I showed them that I was there to work. And after a couple of weeks, I got the job.”

Nakase’s now in her second year as a video coordinator intern, and she has soaked up every experience.

“Last year was great because it was so new to me, so every day was like a dream,” she says. “Then this year — it’s even better because I’m now more experienced with the video staff, and now it’s not so tedious for me. I can do things faster with the video. You’re pretty much like an assistant to all the assistant coaches, whatever they want, in terms of we’ll break down the games for the coaches to see, whatever they want from games, you’ll have to break down and prepare for them —

at the end of the day, you learn so much.”

One memorable experience for Nakase has been working with the professional basketball players.

“Because basketball is so hands on, a huge experience for me was working with J.J. Reddick, who was injured a couple months ago,” Nakase said. “He stood back and asked me [if I could come] in early. I was like, of course, anything that you need.

Working with him, kind of putting him through stuff — for me, that’s the first time that I’ve ever been able to go one-on-one with someone.”

With all of her various coaching experiences, it’s no wonder that she has been honored by a number of community groups, including receiving the “Champion of Change” award from the White House last May.

“That was very surreal,” Nakase recalled. “I was a rookie last year here in the Clippers facility. So when the phone rang for me, which never rings for me in the office, I honestly thought (then-)Coach Vinny Del Negro was playing a joke on me because he’s done that before.”

Nakase was honored along with 14 other Asian American Pacific Islander women who are breaking barriers. “So when they called, I completely thought it was bogus, and within a day, I got an email and it said, ‘You’re invited to the White House.’ I still couldn’t believe it until I emailed back.”

To stay focused and driven, Nakase practices meditation whenever she gets a chance. She also cites reading as one of her motivational tools and has delved into books such as Tim Grover’s “Relentless: From Good to Great to Unstoppable,” Jerry Lynch’s “The Way of the Champion” and Phil Jackson’s “Eleven Rings.”

“My dad told me to read when I was younger, but I never did. I just never did. Now I see the importance,” Nakase said. “I read books about being successful or controlling your mind, controlling thoughts — that for me over the past couple of years has helped me so much because I’ve been in such crazy situations with being a female in the NBA world or being in an environment, especially with video — I’m a coach going into video, and I’ve never worked video before. So, I was frustrated a lot, and I understood that by reading, you could control every thought that goes into your mind. It helped me so much.”

Other coaches she works with have also encouraged her to read more. She explains how Kevin Eastman, an assistant coach with the Clippers, is an avid reader himself who gave her the tip of scanning books quickly to find words and phrases that might attract her eyes. Her Twitter feed is full of inspirational passages, highlighted in yellow with lessons she’s gleaned from her reading.

“I’ve learned the importance of eliminating distractions, whether it’s friends or even some family members or TV or going out. I got rid of a lot of distractions that I used to do,” Nakase said. “And who you surround yourself with I think is the second most important thing that I’ve learned.”

Nakase has determined that, even though her end goal is to coach in the NBA, her bigger mission is to serve others.

“I think going through these books, they tell you how to be successful, but I’ve learned beyond that is, the purpose of life or what I think it is, is to help people and to serve people,” Nakase said. “And I think that means a lot because I’m not really here to be an NBA coach, that’s just my passion. I enjoy doing it, but at the end of the day, how am I going to help people be better, how am I going to help people believe in themselves — I think that’s the important thing.”