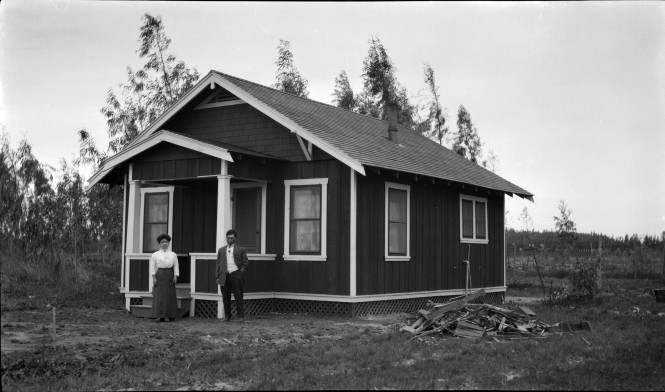 Yukiko and Charles Furuta at the bungalow, circa 1913. Photo by the National Trust for Historic Preservation

WASHINGTON, D.C. — The National Trust for Historic Preservation named Historic Wintersburg in Huntington Beach, Calif., to its 2014 list of America’s Most Endangered Historic Places on June 24.

This annual list spotlights important examples of the nation’s architectural, cultural and natural heritage that are at risk of destruction or irreparable damage. More than 250 sites have been on the list over its 27-year history, and in that time, only a handful of listed sites have been lost.

Historic Wintersburg documents three generations of the Japanese American experience in the United States, from immigration in the late 19th century to the return from incarceration in internment camps following World War II.

The site contains six extant pioneer structures and open farmland and is one of the only surviving Japanese-owned properties acquired prior to California’s anti-Japanese “alien” land laws of 1913 and 1920.

In contrast to Japanese American confinement sites from the WWII era, Historic Wintersburg captures the daily community life and spiritual institutions of Japanese settlers as they established a new life in America.

“Historic Wintersburg is a unique cultural site that tells the important story of early Japanese American immigrants as they sought to make a new life and build a community in Southern California,” said Stephanie Meeks, president of the National Trust for Historic Preservation. “We strongly support a collaborative effort that preserves Wintersburg’s historic landscape while building upon its longstanding role as an educational and supportive space for the Huntington Beach community.”

The site also chronicles the multigenerational story of the Furuta family, Japanese pioneers who cultivated a farm for close to a century, helped establish Japanese civic and business development organizations and are a largely unrecognized part of Orange County’s history.

The property is currently owned by Rainbow Environmental Services, a waste transfer company. In November 2013, the Huntington Beach City Council voted 4-3 to certify an Environmental Impact Report, which rezones the property from residential to commercial/industrial. The Council also approved a Statement of Overriding Consideration — the action that allows demolition of all six structures.

Although Rainbow agreed to provide preservationists until mid-2015 to find solutions to save the historic property, demolition of the site remains a possibility.

America’s 11 Most Endangered Historic Places has identified more than 250 threatened historic treasures since 1988. Whether these sites are urban districts or rural landscapes, Native American landmarks or 20th century sports arenas, entire communities or single buildings, the list spotlights historic places across America that are threatened by neglect, insufficient funds, inappropriate development or insensitive public policy. The designation has been a powerful tool for raising awareness and rallying resources to save endangered sites from every region of the country.