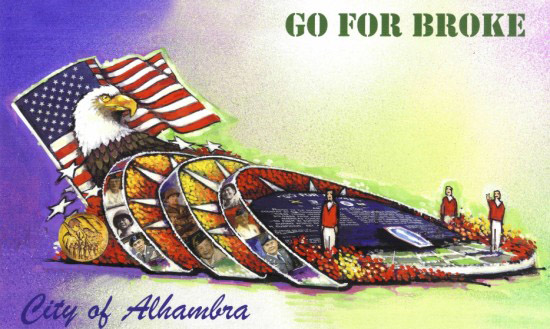 (Above) An image rendering of the City of Alhambra’s 2015 Rose Parade float.

ALHAMBRA, CALIF. — The City of Alhambra’s 2015 Rose Parade float will honor Japanese American soldiers who served in segregated units during World War II, and a search is currently under way to select seven veterans who will ride on the float during the Jan. 1 festivities.

Honoring the theme “Inspiring Stories,” the city and the Go for Broke National Education Center is looking for nominations of float riders from Japanese American veterans groups across the nation. The inspiration for the float itself is taken from the Go for Broke monument in downtown Los Angeles, which features a semi-circular design. Featured on the outside of the semicircle will be images of the 21 Nisei recipients of the Medal of Honor from World War II. A bald eagle and the American flag, along with a replica of the Medal of Honor will also be prominently displayed on the float.

Veterans must meet the following criteria to be eligible:

• Must be present in Pasadena for the final float judging on Dec. 31 at 2 p.m.

Families are also encouraged to nominate a veteran. There is no fee and the City of Alhambra is hoping for representation from across the nation. Final selections will be made by the City of Alhambra. Transportation and lodging costs are the responsibility of the rider and/or his family.

To nominate a veteran, submit a 100- to 200-word profile. Nominations must be received by Oct. 27. Email the nomination and profile to Peggy Renke at peggy@goforbroke.org or mail to GFBNEC, 367 Van Ness Way, Suite 611, Torrance, CA 90501.