The event’s focal point was to come together to learn about lessons of the past and also speak up today in support of Muslims, refugees, immigrants and others being targeted across the U.S. 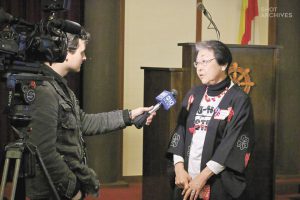 Former camp incarceree Christine Umeda shared her thoughts on E.O. 9066 and her experience during WWII with ABC News 10.

“The Japanese community says ‘Never Again.’ We reject those who despicably justify bans on immigrants and refugees today because they mistreated Japanese Americans in the past. This happened to us before, and it should never again happen to others. We’re here to open our minds, open our hearts and open our arms to Muslims, refugees and immigrants,” said Michelle Huey, Next Generation Representative.