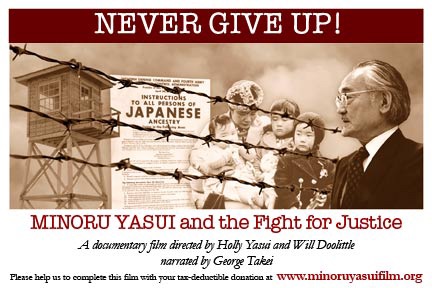 ‘Never Give Up! Minoru Yasui and the Fight for Justice’ World Premiere Set

On March 28 — Minoru Yasui Day in Oregon — the new documentary film “Never Give Up! Minoru Yasui and the Fight for Justice” (Part One) will have its world premiere at the Grand Theater in Salem, Ore.

Sponsored by the Salem Progressive Film Series, the program will start with an energizing performance by Portland Taiko, an ensemble of traditional Japanese drums. Gov. Kate Brown will then introduce the film, which runs about 55 minutes, and a panel discussion and Q & A session will follow the screening.

“Never Give Up!” tells the story of Oregonian civil rights leader Minoru Yasui, son of immigrant parents from Japan — from his childhood in the farming community of Hood River, Ore., in the early 1900s; his education at the University of Oregon in Eugene in the 1930s; and his legal challenge of the discriminatory military orders in Portland on March 28, 1942 — exactly 75 years before the premiere of the film.

Historical photographs, documents and film footage trace the process that more than 120,000 persons of Japanese ancestry underwent at the start of World War II as the U.S. government registered, restricted and removed entire families from their homes on the West Coast and imprisoned them, first in temporary detention centers like the International Livestock Exposition center in North Portland, and then in more permanent War Relocation Authority concentration camps such as Minidoka in Idaho.

The film also follows Yasui’s legal case as he languished in solitary confinement at the Multnomah County Jail awaiting his appeal to the U.S. Supreme Court while his family was separated.

The FBI arrested his father, Masuo, who was sent to a number of different U.S. Department of Justice prisoner-of-war camps. Yasui’s mother, Shidzuyo, and younger siblings, Homer and Yuka (who are interviewed in the film), were sent from Hood River to the Pinedale Assembly Center, then to the Tule Lake concentration camp in California.

Yasui’s sister, Michi, escaped the forced relocation by violating travel restrictions and fleeing from Eugene, Ore., where she was about to graduate from college, to Denver, Colo., outside of the exclusion zone established by the U.S. military.

After Yasui lost his case at the U.S. Supreme Court, he was released from the Multnomah County Jail, only to be reimprisoned at the Minidoka concentration camp, where he continued his work with the community and the Japanese American Citizens League, a patriotic civil rights organization that he had helped to establish in Oregon during the 1930s.

The film depicts his position with regard to the controversial “loyalty questionnaire” administered in the U.S. concentration camps, along with the heartbreakingly difficult decisions that many young Japanese American men were forced to make when the military draft was reinstituted.

“The circumstances and consequences of the Japanese American experience during World War II are chillingly relevant today as the federal government calls for a Muslim registry and has imposed travel restrictions upon persons based solely upon their national origin,” said Holly Yasui, Min Yasui’s youngest daughter and the film’s co-director. “In my father’s name, I have joined in amicus briefs being filed in the federal courts opposing Executive Order 13769, and I will continue to speak out against additional discriminatory regulations which the government has wrongly ‘justified’ by the illegal and immoral treatment of Japanese Americans in the 1940s.”

Holly Yasui started production of the film in 2013 as part of a project to honor her father on his centennial — he was born in 1916 and if he had lived, Yasui would have turned 100 years old in 2016.

The Min Yasui Tribute project — co-founded by Yasui and Peggy Nagae, Yasui’s lead attorney in 1983 when he reopened his wartime legal case — resulted in Yasui earning a posthumous awarding of the Presidential Medal of Freedom in 2015 by then-President Barack Obama, as well as the designation of March 28 — the day he initiated his constitutional legal test case — as Minoru Yasui Day in Oregon in perpetuity by the unanimous vote of the state legislature in 2016.

Upon encouragement by Japanese American activist George Takei, who narrates the film, Holly Yasui and the film’s co-director, Will Doolittle, decided to release Part One of the film in order to contribute to the reflections upon the Japanese American World War II experiences during the 75th anniversary year of Executive Order 9066, as well as provide materials for the ongoing discussions of civil and human rights that are currently under fire by the new federal administration.

“Never Give Up!” will be made available to educational institutions and community groups that wish to screen, discuss and study the issues it raises.

Concurrently with the completion of the second part of the film — Yasui’s postwar life and ongoing defense of the human and civil rights of all people — Holly Yasui is working on a study guide and teacher workshops using Part One of the film, including a middle-school curriculum developed by Hood River Middle School teacher Sarah Segal and the Oregon Nikkei Endowment.

The film (Part One) will be screened in Hood River on April 2 at the Columbia Center for the Arts and on April 3 at the Hood River Middle School.

It will then travel to Colorado for a community screening in support of the Coalition for an Inclusive Colorado in Denver on April 8.

“Never Give Up!” will return to Oregon as a selection of the DisOrient Film Festival in Eugene, Ore., on April 21-22.

And on July 29, it will premiere in the Los Angeles area at the Japanese American National Museum in Little Tokyo.

The filmmakers hope that “Never Give Up!” will contribute to the ongoing discussions of human and civil rights issues that are arising from new and emerging federal, state and local policies regarding immigrants, racial and religious profiling and due process of law.

As Minoru Yasui himself says at the end of the film:

“From the standpoint of history, I think I’d like to have the American people realize that when you subjugate, when you suppress or oppress any group of people, you are really derogating the rights of all people because if you could do it to the least of us, then you can indeed do it to all of us.

“I should be just as eager to defend your rights as I am my own because your rights impinge upon mine. If they take away your rights, they could take away mine, so I will fight to preserve yours.

“If there is suffering or pain that is unfairly imposed upon anyone, it’s my duty, it’s your duty to try to alleviate it because that’s the way in which we gain a better life for all of us.”

Doors at the Grand Theater will open at 6:30 p.m. Admission to the premiere screening is free, but a $5 donation to the Salem Progressive Film Series is suggested.