LOS ANGELES — The Japanese American National Museum presents “Instructions to All Persons: Reflections on Executive Order 9066,” a new exhibition that commemorates the 75th anniversary of President Franklin D. Roosevelt’s signing of Executive Order 9066, which led to the unlawful incarceration of 120, 000 individuals of Japanese ancestry during World War II.

The exhibition, which runs through Aug. 13, will feature for the first three months the original documents from the National Archives, never before displayed in the Western U.S., as a centerpiece of the exhibition. 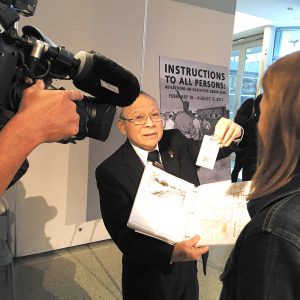 JANM docent Bob Moriguchi shows a photo of his family’s WWII incarceration to a TV crew at the media preview for the exhibition “Instructions to All Persons: Reflections on Executive Order 9066,” which runs through Aug. 13.

The original Executive Order 9066, including the page bearing Roosevelt’s signature, will be on loan from the National Archives until May 21. In addition, Presidential Proclamation 2537, a key precursor to E.O. 9066 that required individuals from the enemy countries of Germany, Italy and Japan to register with the U.S. Department of Justice, will be displayed, also on loan from the National Archives.

After May 21, replicas will be on display for the duration of the exhibition. E.O. 9066 was most recently displayed in Washington, D.C. in 2013; prior to that it was on view at the Smithsonian’s National Museum of American History in 1987 and ’88.

“Instructions to All Persons” is intended to engage visitors in critical discussions of the Japanese American incarceration experience and its continuing relevance today.

“’Instructions to All Persons’ is an important exhibition that looks back at pivotal actions by the American government that led to tragic outcomes for Japanese Americans during World War II, while at the same time demonstrating how the lessons of that shameful chapter of history are powerfully meaningful in our world today and how without vigilance that grave injustice could happen again,” said Ann Burroughs, interim president and CEO of JANM. “This is an exhibition that everyone who cares about civil rights, democracy and justice needs to see.”

“Instructions to All Persons” is funded by the Eli and Edythe Broad Foundation.