Reflections on Four Years of Service

Rob Buscher is sworn in for his second term in 2017. (Photo: Courtesy of Rob Buscher)

Nearing the end of his term as a commissioner on the Advisory Commission on Asian Pacific American Affairs, Buscher speaks to Pennsylvania Gov. Tom Wolf about key issues facing the AAPI community.

For the past four years, I have had the incredible privilege of serving as a commissioner on Pennsylvania Gov. Tom Wolf’s Advisory Commission on Asian Pacific American Affairs.

The commission’s primary function is to advise the governor on policies, procedures, legislation and regulations that affect AAPI communities while also acting as a liaison from the governor’s office to the Commonwealth of Pennsylvania’s AAPI population. Commissioners serve on a voluntary basis and come from a wide array of professions and ethnic communities represented within the Pennsylvania AAPI diaspora. 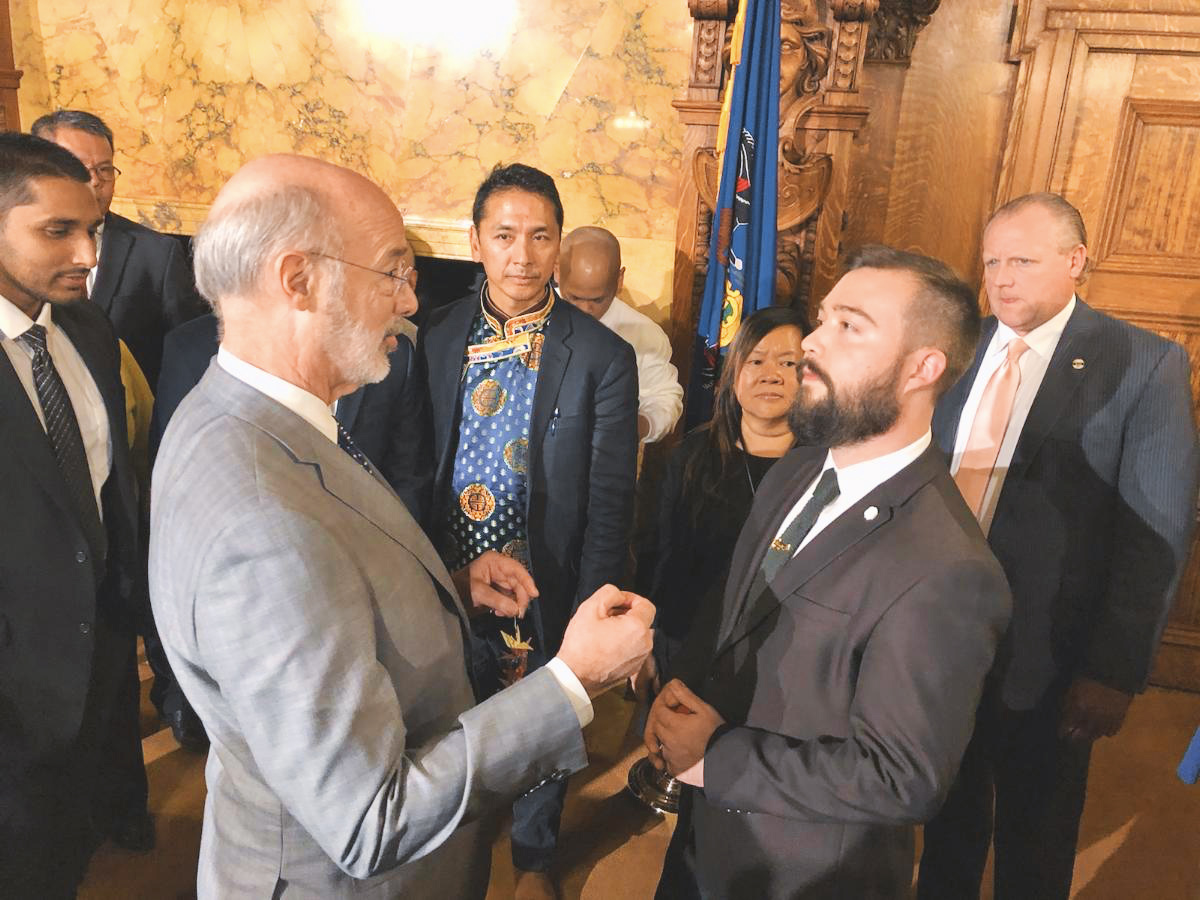 I was asked at the end of 2015 to join the commission because of the advocacy work I was doing with the AAPI artist community through my role with the Philadelphia Asian American Film Festival. I was then tasked with establishing a subcommittee that would continue to focus on this area.

To that end, we established the Pennsylvania AAPI Arts Collective. Representing the interests of Asian American and Pacific Islander artists, musicians, theater artists, filmmakers, arts administrators, arts educators and all other creatives who make their living through the arts, the arts collective advocates for increased opportunities for artists and seeks to implement programs facilitating better collaboration, resource sharing and capacity building on behalf of all AAPI creatives.

During my four years with the commission, we were given access to top leadership in state agencies with whom we conducted regular legislative visits to advise on a variety of policy areas related to our respective communities.

Our Government That Works committee implemented nearly two-dozen town hall listening sessions with communities around Pennsylvania. Topics ranged from census participation to ending the prison-to-deportation pipeline. The Jobs That Pay committee helped to organize a series of international trade missions to the Philippines to build interest in local investment.

The biggest achievement by our Schools That Teach committee was to establish a state-wide network of community-based heritage language schools called AAPLES (AAPI Language Education Schools) that provides resource sharing and collective bargaining with the Department of Education for state funding. We also created an age-appropriate reading list for K-12 public schools that are interested in incorporating more Asian American Studies in the classroom and advocated for more public universities to add Ethnic Studies curriculum.

By cultivating meaningful relationships between government agencies and Muslim American communities, Ramadan events are now held throughout the Commonwealth as part of the ongoing effort to combat Islamophobia.

In the Arts Collective, we were able to establish a regular series of AAPI artist convenings in Philadelphia that happens quarterly and includes open-format networking, a performance, pitch sessions and presentations by other arts partner organizations.

Together with JACL Philadelphia and PAPA, the collective successfully advocated for the removal of yellow-face makeup from Opera Philadelphia’s 2016 production of “Turandot.”

The collective also helped organize an ongoing series of events at the Barnes Foundation highlighting the region’s diverse artist community called the “Artist Bash,” one of which took place during the 2018 JACL National Convention.

Most importantly, we established a close-working relationship with the entity that administers all state-funded grant opportunities for artists, Pennsylvania Council on the Arts, and have ensured that our communities are being equitably represented in their funding portfolio.

We also recommended for Lao American spoken word artist Catzie Vilayphonh to join PCA’s voting body, as well as successfully advocated for Japanese American woodworker Mira Nakashima to win the Lifetime Achievement Award in the Arts that Gov. Wolf presented to her in 2018.

Amazingly, all of these goals were accomplished by an entirely volunteer group that was otherwise unfunded beyond our single staff person. The issues we were successful in advancing were accomplished by leveraging partnerships with other organizations and the sheer tenacity of the commissioners who gave their nights and weekends to accomplish these goals.

Overall, I look back at my time on the commission with tremendous fondness. My fellow commissioners became like an extended family, and we were able to do a lot of good for the AAPI communities in Pennsylvania. 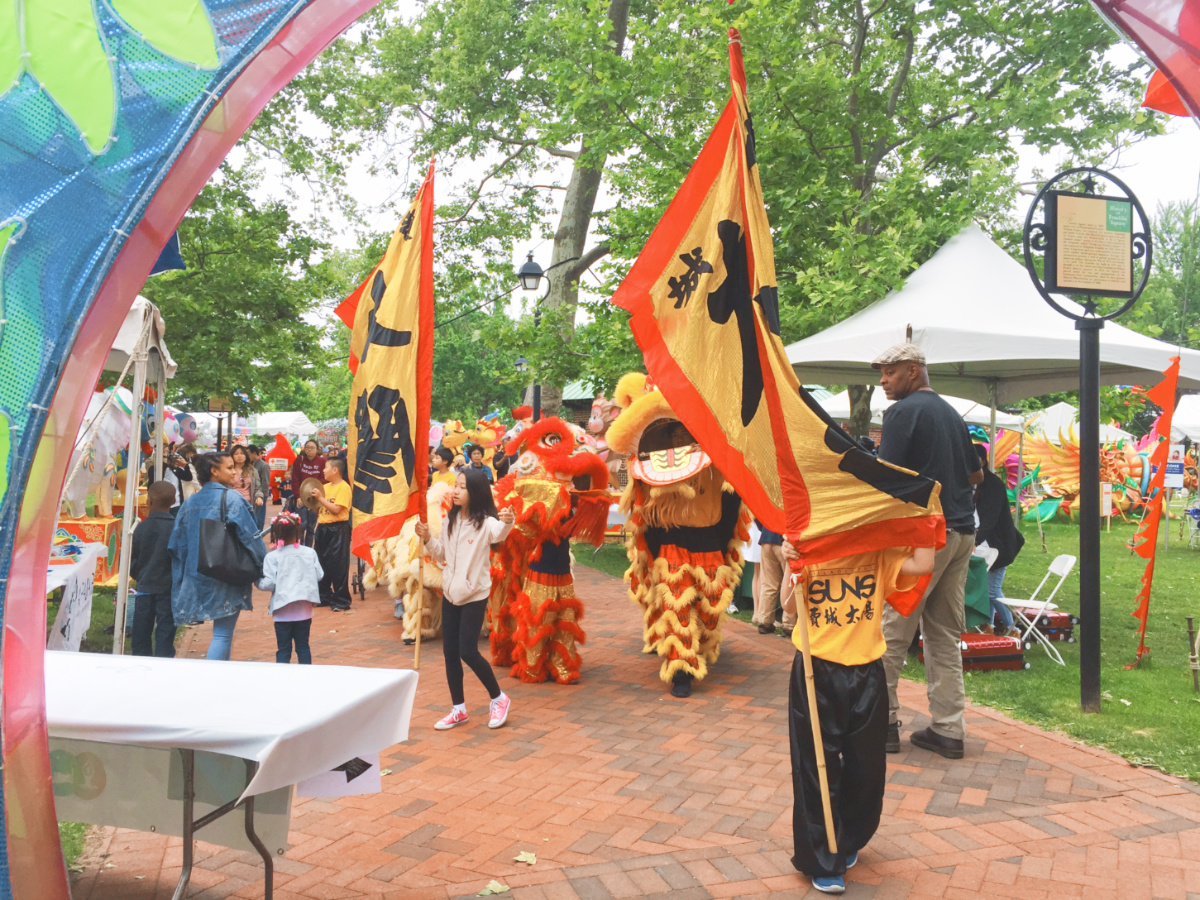 Yet, as my cohort neared the end of our four years of service, we became increasingly concerned about whether our issues were actually being heard by the governor. Despite our roles as commissioners, we have never had more than a few minutes at a time with Gov. Wolf, and our interactions have mainly consisted of quick handshakes and photo ops during APA Heritage Month and other key events throughout the year.

I knew going into this work that as an advisory commission, we would not have formal authority to enact any policy, but had at least hoped that we could present our positions directly to the governor on key issues like immigration enforcement, which affects a growing number of AAPIs and their families.

According to AAPI Data, an estimated 1.7 million Asian Americans are undocumented residents of the U.S. Pennsylvania has the 10th-largest AAPI population in the country and in recent years has become a hotspot for ICE deportation of Southeast Asians, many of whom entered the country legally as refugees.

While Gov. Wolf clearly has no say in federal immigration enforcement, a major issue that falls under his jurisdiction is the Berks Detention Center. Known officially as the “Berks Family Residential Center,” this ICE detention facility, located just outside of Reading, Pa., is funded by a federal contract that nets Berks County about $6 million annually.

The political reality of our mostly red state of Pennsylvania is that Gov. Wolf, a Democrat, could not have been re-elected had he issued an emergency removal order to shut down the facility prior to the 2018 election. However, now that he is safely into his second term, there are fewer ramifications for Gov. Wolf to close Berks, which is why it has been disheartening that he still hasn’t done so.

Over the past year, I have been discouraged by the governor’s lack of action on this issue, and it became clear that I was not going to have the opportunity to give a formal policy debrief before my term as commissioner expired.

So, as the final weeks of my term came to an end, I decided that I should use my last face-to-face encounter with Gov. Wolf at the new commissioner swearing-in ceremony to encourage him to take decisive action on the Berks Detention Center.

Knowing that I would have about 30 seconds to get my message across, I figured the best way to get his attention was to gift him a small strand of origami cranes that I strung on behalf of the Japanese American community of Pennsylvania.

This seemed particularly fitting coming from the outgoing chair of the Arts Collective, following the incredible example set by the Tsuru for Solidarity campaign that is sweeping our nation.

The 10 tsuru on the string represent the 10 American concentration camps where Japanese Americans and people of Japanese ancestry were forcibly held during WWII. (Photo: Courtesy of Rob Buscher)

JACL Philadelphia also staged a vigil outside of the Berks Detention Center in June 2019 where we delivered 3,000 cranes as part of our own Tsuru for Solidarity action, so this was building upon a precedent already set in local Japanese American advocacy efforts.

After Gov. Wolf finished his remarks during the ceremony, I shook his hand and presented him with the tsuru, explaining their symbolic meaning and noting that the 10 cranes on the strand represented each of the concentration camps in which our community was incarcerated during World War II. I then asked on behalf of the JA community of Pennsylvania if he would reconsider his position on the Berks Detention Center.

Gov. Wolf was definitely caught off guard, but I was pleasantly surprised when he responded that his position is that Berks should be shut down. The governor said that ideally, he would like to see it turned into an addiction treatment facility to combat the ongoing opioid crisis in Pennsylvania.

He also stated that while his office had attempted to revoke the business license, because the contract is between the Federal Government and Berks County, it is up to the County Commissioners to close the facility.

The governor cited a previous attempt by his administration to replace the $6 million annual income that Berks receives from ICE with an investment package that amounted to about $5.2 million, which the County Commissioners had declined.

Granted, this answer came from a politician in a crowded room of constituents who were mostly immigrant and their descendants, but he seemed genuine in wanting to solve the issue. I ended our interaction by saying that we hope he will continue working toward a favorable resolution, handed him a Tsuru for Solidarity card and told him to visit the website for more info on our policy positions.

I do not know if our interaction had a larger impact on the governor, or if it is something that he has already forgotten. I do know that my conscience would not allow me to leave my position as commissioner without speaking my piece to him.

I am glad that I was able to serve our communities in the capacity I have these past four years and would serve again if given the opportunity. However, it is necessary for Gov. Wolf’s Office to consider the message they are sending to our historically marginalized AAPI community when the entirety of the commission’s work is being done at the expense of volunteer labor from a vulnerable class of people, especially if those people feel they are not being listened to.

Since this interaction, JACL Philadelphia has formally joined the Shut Down Berks Coalition, and I have joined the steering committee of Tsuru for Solidarity to help organize additional actions around this issue.

This year is going to be a big year of advocacy for the Japanese American community as we gear up for our June 6 National March on Washington, D.C., to end immigrant detention. Shutting down the Berks Detention Center will definitely be a part of that conversation, and we will hold our elected officials accountable if they fail to take action.

For more information on the Governor’s Advisory Commission on APA Affairs, visit https://www.governor.pa.gov/wp-content/uploads/2020/02/2015-2019-GACAPAA-Term-Report-FINAL.pdf. 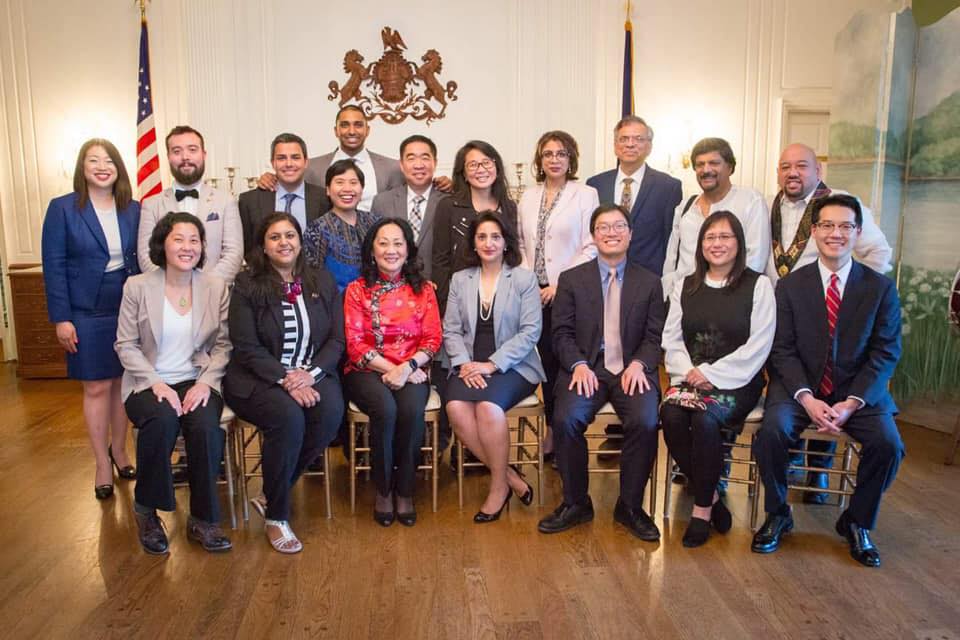