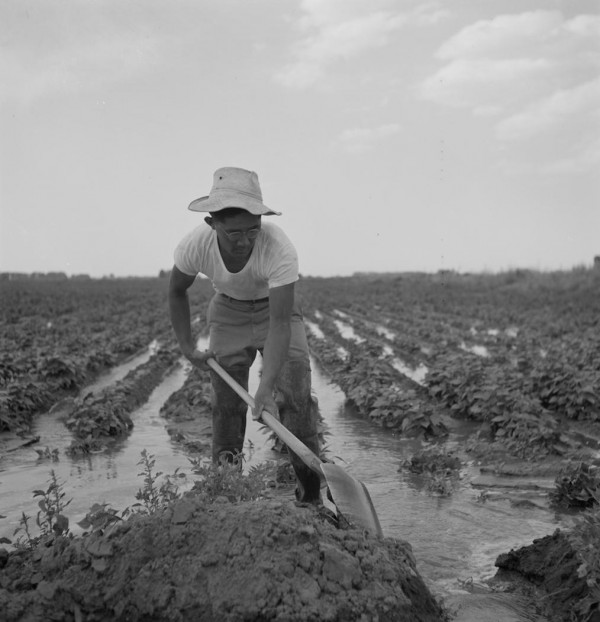 Laborer working outside the farm labor camp near Rupert, Idaho in July 1942. Photo by Russell Lee, Library of Congress

The Oregon Cultural Heritage Commission recieved an NPS grant of $92,386 in 2013 to document Oregon and Idaho labor camps.

It was just a coincidence when about six years ago, Janet Koda, 61, saw a black-and-white photo of her family pictured at a World War II farm labor camp. Koda’s sister found the photo in a Japanese American book, and then her niece would once again find the National Archives photo online.

“My mom is the one on the right. She about 19, 20 years old,” said Koda of the photo that captures her mother, Mary Takami. “And that’s Auntie Rosie.”

The image shows Koda’s family in 1942 gathered around a picnic table in a tent at Garrison’s Corner camp near Nyssa, Ore. The Japanese Americans are staring patiently at the man behind the camera, photographer Russell Lee.

Lee served as a photographer for the Farm Security Administration from 1935-73. From the spring to the summer of 1942, Lee captured the unjust removal and subsequent incarceration of Japanese Americans in the United States. He traveled during July and August to labor camps in Idaho and Oregon, where he snapped images of families like Koda’s. 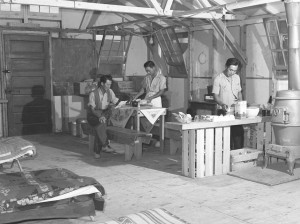 Housing at the farm labor camp near Rupert, Idaho. Library of Congress

Koda, who still lives in Oregon, helped identify her relatives in several of photos, including one of her father, Sonny Takami, a camp security officer who is posed grinning with a cigar in his mouth. Those photos will be part of an exhibit presented by the Oregon Cultural Heritage Commission called, “Uprooted: Japanese American Farm Labor Camps During World War II.”

The exhibit — which includes 45 photos and an oral histories component — will open onSept. 12 at the Four Rivers Cultural Center in Oregon. From there the exhibit will travel to the Pacific Northwest region.

“I’ve been working on this project for a little more than two years. It really started revving up about a year ago because someone said, ‘Hey, that’s my father and my mother,” said Morgen Young, a JACL Snake River chapter member who is also the project director and historian. 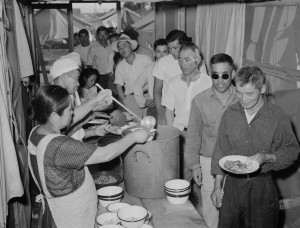 The cooperative mess hall of the farm labor camp near Nyssa Oregon. Library of Congress

“I volunteer at the Japanese American National Museum. One particular day, a person was out, so I substituted in the Hirasaki Resource Center. When I was sitting there with nothing to do, I started looking through the paper. I said, ‘Oh, I haven’t read the Pacific Citizen lately. So, I starting thumbing through,” said Tanaka. “I came across [Young’s] request for people who had left camp and gone and stayed in the farm labor camp. So, I contacted her and set up an interview.”

Tanaka was not able to identify family members in any of the photos, but he participated in the exhibit’s oral history project. He shared his experiences as an 8-year-old boy living with his father and mother at Minidoka and later the Twin Falls labor camp in Idaho.

“My parents got cleared by the FBI. Their notice came Dec. 24, 1942,” said Tanaka. “So, they went out on seasonal leave with a group of people who stayed at the Twin Falls farm labor camp that spring to help with the sugar beets,” said Tanaka. “We stayed out until the fall harvest.”

The traveling exhibit documents some 33,000 Japanese Americans like Tanaka, who left WWII incarceration camps from 1942-44 to work as seasonal laborers.

Young, who is leading the exhibit project, says she was able to identify many people in the black-and-white photos with the help of the Japanese American community in Eastern Oregon. However, she still needs help identifying people in photos now uploaded to the photo-sharing site Flickr. Photos included in the exhibit will have captions with the names of all who have been identified.

“I was real excited about this Farm Security Administration project. All the pictures that were taken, I’d never have them. It’s part of our family history,” said Koda. “I’m excited for the show that’s going to happen in September here at Four Rivers Cultural Center.”

Koda was in the fifth grade when her family left the labor camp in 1964. It was before the Beatles arrived in the U.S., she recalls. Thanks to the “Uprooted: Japanese American Farm Labor Camps During World War II” exhibit, Koda now has a piece of family history she never had before.

“The ones I have are just photocopies from the Internet,” Koda said. “Eventually, we’ll get actual photos, and those will be framed.”