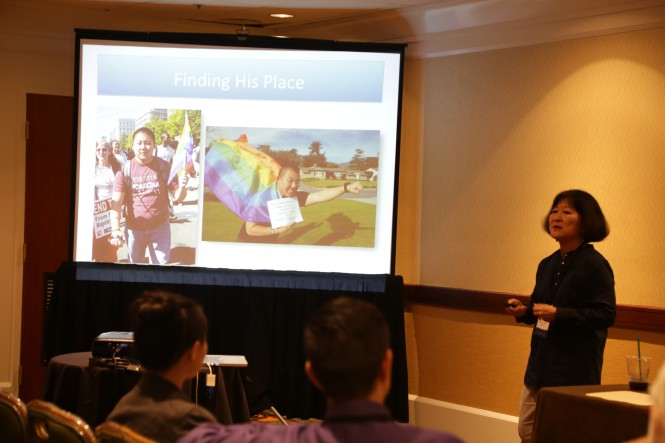 A room full of people representing a wide variety of generations gathered for the LGBTQ Justice workshop on July 11 at the JACL National Convention.

Sugiyama said that the goals of the workshop were to help participants gain awareness and understanding of how to create an inclusive community within the JACL, as well as to empower chapter and district representatives to expand injustice work in their own communities.

The meeting began with “Terminology 101,” led by Nitahara, in which the words lesbian, gay, bisexual, transgender, cisgender and queer were defined. Although awkward silence scattered throughout the beginning of the session, as Nitahara explained the terms, participants began raising questions that gave way to clarifications.

Ishigo stepped up to hash out the difference between gender identity and sex identity using a diagram called the “Genderbread Person” as a visual aid.

“It’s not necessarily how other people read you, but it’s how you read yourself,” said Ishigo. “And everybody has the freedom to define their own gender.”

The Genderbread Person displayed an array of graphs concerning gender identity, gender expression, biological sex and attracted to. Ishigo went on to point out that there are no ties between gender and sex identity. She said, like the chart, the definitions of gender and sex are fluid — a scale that slides according to an individual.

Then, Aizumi rose to provide information about the LGBT advocacy work that has been accomplished through the JACL. But first, she shared her personal story about her experience being the mother of her transgender son, Aiden Aizumi.

Transitioning into high school, Aiden developed panic attacks and started to withdraw and become depressed. She came out as a lesbian as a sophomore.

“We thought it was going to get better, and it got worse,” said Aizumi. She said harassment and bullying reached overwhelming ferocity to the point where Aiden had to graduate high school by studying from home.

Aizumi said that after turning 21, Aiden told her, “I’m not a lesbian, I’m a boy.” Her family, including her husband, spent 2009 transitioning their daughter to their son.

Reflecting on the experience brought tears to Aizumi’s eyes as she revealed how challenging it was, but this story has a happy ending.

“Since then he has found his place . . . he really has soared,” said Aizumi. “He has been able to come out as an individual, not only just be his true self, but really his heart has been able to open up and he has immersed himself in the community.”

Together, Aiden and his mother have written a book published two years ago, “Two Spirits, One Heart,” that documents, “A mother, her transgender son, and their journey to love and acceptance.” They’ve also marched in parades, held workshops and shared their story via public speaking arrangements.

Following her family’s story, Aizumi dove into the next portion of the workshop to discuss LGBTQ justice in relation to the JACL. She highlighted the activism in the San Gabriel Valley, Seattle, Chicago, New York, Washington and the Midwest District. The workshop capped off with small group discussions, separating the room into three groups led by Nitahara, Ishigo and Aizumi.

The San Gabriel Valley Asian Pacific Islander PFLAG (Parents, Families, and Friends of Lesbians and Gays) Chapter is the most active in LGBTQ work. It has monthly meetings along with two different methods to provide the community with support and education.

One of those mechanisms is the family circles, in which PFLAG facilitates conversation to “build bridges between family members in a positive and private way,” according to the SGV API PFLAG website. The other is afternoon teas, which are culturally arranged meetings where attendees can openly discuss LGBT issues over tea and snacks.

The group caters to a multitude of dialects, including Chinese, Hindi, Japanese, Korean, Punjabi, Tagalog, Thai and Vietnamese.

The Pacific Southwest office generated another fresh major justice group: the Nikkei LGBTQ Initiative. The Initiative’s vision is to establish “a thriving Nikkei community that is actively inclusive and safe” by organizing educational programming through events.

Thus far, two events have taken place in March and May of 2014 prior to the JACL conference workshop. The second was hosted at Centenary United Methodist Church and even featured United Methodist minister Bishop Roy Sano as a speaker.

The next Nikkei LGBTQ gathering is headlined “Okaeri,” which means “welcome home.” It is set to take place at the Japanese American National Museum on Nov. 15 from 8:30 a.m.-4 p.m. — the longest event to date — and will feature “educational and storytelling workshops,” according to jaclpsw.org.

Aizumi said that attendance numbers nearly doubled from the first event to the second.

Despite the positive reports from the LGBTQ Justice workshop, a couple attendees posed sobering questions at the tail end of the presentation portion.

One gentleman inquired about the extent of the lack of public acceptance of the LGBTQ community. He said he encountered some opposing LGBTQ views at a recent funeral and that it surprised him a great deal. Another man asked about what the panel’s experience was co-sponsoring events with Christian churches.

In regards to public understanding of the LGBTQ community, Aizumi said, “I think it’s evolving . . . there’s more understanding.” At the beginning of the workshop, the panel noted the title of the session highlighted, “LGBTQ Justice in the Nikkei Community: There’s Work to be Done!”

In terms of partnering with churches, Ishigo said that it is fully dependent on the climate of the congregation because they don’t want to create issues by forcing their events upon anyone. She said that they’ve backed out of holding an event at a church before as to not cause unwanted problems.

Although Aizumi added that she is extremely appreciative of accepting churches since her transgender son, Aiden, was asked to leave their church.

“When you are struggling, you hope you have a spiritual support, and you’re asked to leave a church — that’s very difficult,” said Aizumi. “So, when I see churches today trying to understand and help their church be more inclusive, I’m just so grateful for that work.”

Registration for Okaeri is open at www.okaeri-la.org.

The purpose of Okaeri is “to make the Japanese American community in Southern California a home for the whole community,” said Nitahara. “This is one of the baby steps.”