Like most countries including the U.S., Japan is struggling with the spread of the Omicron variant of Covid-19. Aside from its internal battles to vaccinate and provide boosters to its citizens, Japan’s pretty hardline solution to help manage the pandemic has been a strict blockade of foreigners entering its borders — even foreigners with resident visas and students. Never mind that the situation has been a terrible stress for a lot of people who already live there but happened to be traveling outside the country before the lockdown, but it’s also been frustrating for people like me: tourists.

I love traveling to Japan, as I’ve written before. I especially think Japanese Americans should go there because you’re sure to feel deep connections and find parts of you that you didn’t even know you were missing. Never mind whether you can speak Nihongo or not — most Americans can’t, yet many Americans travel to Japan who aren’t JA and get around just fine.

I miss going to Japan. The last time I was there was in the fall of 2019, mere months before Covid shut everything down.

I’ve missed Japan so much that I’ve been thinking about an American photographer, William Corey, who also loved Japan and found his life’s artistic calling there, shooting gorgeous, enormous photographs of gardens in Kyoto. Specifically, Zen gardens at Buddhist temples that reflect the awesome peace and tranquility that is part and parcel of Japanese aesthetics.

Corey was born in New Jersey in 1949 and lived in Boulder, Colo., for 25 years, until his death from cancer in 2008. Not only was he able to capture spectacular, detailed images of Japanese gardens, but also his talent was such that he was the only Western photographer commissioned to shoot the Imperial Gardens in Kyoto. 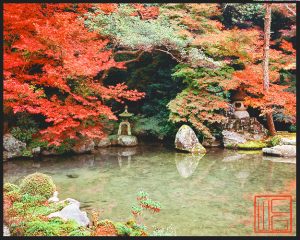 When Emperor Akihito and Empress Michiko visited Colorado in 1994 with a stop in Boulder, Corey was invited to capture the gardens. He’s captured a lot of the most famous gardens in Japan and photographed them in all the seasons to express the epic scope of his appreciation for them.

Corey was inspired to shoot photos of gardens in Japan after seeing a PBS show about them in 1974. He traveled often to Japan, where he also met and married Reimi Adachi, who today is the executor of his estate and dedicated keeper of his artistic legacy.

What made his art so special? Corey was an old-school photographer, and I don’t mean just that he used film and not digital cameras. When Corey saw the detail and majestic intricacy of a classic Kyoto garden, he realized that just using a 35-millimeter camera wouldn’t do the subject justice. Nor a typical “large-format” camera that used 4×5- or even 8×10-inch sheets of film.

Corey found an antique “banquet camera” from the early 20th century that was designed to shoot large group pictures of people at — you guessed it — banquets. It used a wide-angle lens to capture everyone and held sheets of film that were 8×20 inches.

The camera was a wooden contraption with black leather bellows perched on a wooden tripod with a black shroud that draped over the photographer, like a stereotype of a long-ago camera (which it was).

Corey worked with it to figure out the best exposures to get all the details, the color and lighting he envisioned for every image. That image, by the way, appeared upside down on the back of the camera, so he had to know exactly what he wanted in the frame and adjust the camera just so, until his composition was perfect. Then, he would uncover the lens and expose the film for 20, 30 minutes or more. If the light or weather changed or someone inadvertently walked through the scene, he would cover the lens and wait to then uncover it again. It was precise and painstaking.

The effort shows in his work, which is now — thanks to Reimi Adachi’s persevering efforts — under the care of the Department of Special Collections and University Archives for the University of Massachusetts, Amherst Libraries. Adachi’s indefatigable determination also led to Corey’s first-ever gallery exhibit in Kyoto last year.

A few years back, when the city of Denver launched a direct flight between Denver and Tokyo, Corey’s photos were out on display at Denver International Airport to celebrate, and they were glorious.

One of the best Japanese restaurants in the Denver area, Izakaya Amu in Boulder, has Corey’s work proudly hanging on its wall, absolutely enhancing the artistic level of the cuisine.

Anyone who loves Japan, gardens or photography should visit WilliamCorey.com, the online repository of some of the artist’s work, as maintained by his widow.