Nikkei Voice: ‘Always Be My Mabye’ Is a Crazy Great Asian American Movie — Thanks to ‘Fresh Off the Boat’

“Crazy Rich Asians” was such a surprising success to Hollywood’s power brokers last year that its ripple  effects have included some other film and TV  projects featuring Asian Americans and  Pacific Islanders.

But it would be a mistake to say that “CRA” broke the dam and allowed the flood of AAPI projects to come to our big, small and tiny handheld screens. Other AAPI-focused movies opened last year, too, including John Cho’s excellent cyber-thriller “Searching” and the sweet teen love story “To All the Boys I’ve Loved Before” starring Lana Condor, which is on Netflix.

“Always Be My Maybe,” a new movie also on Netflix that dropped last month, is a wonderful, entertaining rom-com that’s easier for us to identify with (who can really identify with the fabulously wealthy society of Singapore?), and it wasn’t sparked by “CRA” — “Always Be My Maybe,” as co-star and co-writer Randall Park pointed out in a recent NPR interview, had finished filming and was starting post-production when “Crazy Rich Asians” was released last summer.

If anything, “Always Be My Maybe” and the plethora of other AAPI Hollywood treasures and pleasures that are coming soon to a theater, television or mobile screen near you can trace their roots back to 2015, when ABC debuted “Fresh Off the Boat.”

That’s the sitcom starring a Chinese American family in 1990s suburban Florida, where the dad runs an all-American steakhouse and the mom writes murder mysteries. It was originally loosely based on the memoir of celebrity chef Eddie Huang, who almost immediately declared that the show was phony and not edgy enough. Duh — this is network television, dude, what did you expect?

However, Huang is still credited as producer, but the show’s creator and producer, Nahnatchka Khan, has kept it going now for five seasons, thanks to a stellar cast that stars Constance Wu as Jessica Huang, Park as Louis Huang and Hudson Yang as their oldest son, the chef-to-be Eddie. The show balances Asian cultural touches (the grumpy, blunt grandmother and the overachieving younger sons — Eddie is the slacker of the bunch) with storylines that keep non-Asians watching.

Also spinning off “Fresh,” Park wrote the romantic comedy “Always Be My Maybe” with co-star Wong and Mike Golamco. “Fresh” creator and showrunner Khan directed “Always Be My Maybe,” and the production has a comfortable, familiar feel like the old blanket you toss over yourself while watching TV on a cold night. 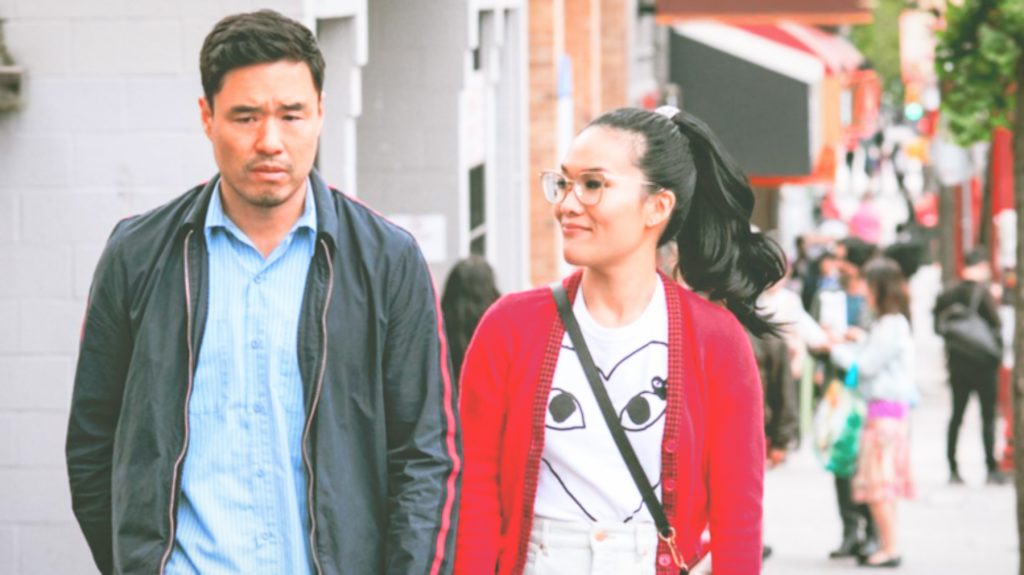 “Always Be My Maybe” stars Randall Park and Ali Wong.

The chemistry is so natural and believable between Park and Wong that the story makes instant sense, especially to Asian American viewers but to non-Asian audiences as well.

Park plays Marcus Kim, a Korean American guy in San Francisco who’s been a little adrift all his life, working with his dad in an air conditioning/heating business and playing in a rappy rock band circa mid-1990s.

Wong is Sasha Tran, a driven Vietnamese American celebrity chef who’s back in S.F. to open a new hip restaurant. The two were neighbors as kids, and inseparable … until they have sex and Marcus doesn’t handle it well. The film is about their off, then almost on, then on-again romance, told with great humor and cultural insights.

For instance, the two visit a Chinese restaurant for dim sum and Sasha notes how snooty the staff always was to them when they were young. But Marcus speaks in Chinese to a passing server, and he gets free dumplings. He taught himself Chinese, he says, to get better service.

The highlights include cameos by two stars who appear as Sasha’s boyfriends. Daniel Dae Kim is her beau at the beginning, a more famous restaurateur who is full of himself. And the one getting all the press is Keanu Reeves, who plays himself in a hilarious series of scenes as Sasha’s newest boyfriend. He wrote or improvised many of his lines, and it’s a testament to his classiness that he could come off his role as an assassin of assassins in the “John Wick” saga and do this star turn so effortlessly.

Plus, Reeves is Chinese-Hawaiian and European, so his casting is the perfect cultural icing on the cake. This movie didn’t need a white movie star as a savior. It’s a proudly Asian American cast film from start to finish.

That’s what’s so great about “Always Be My Maybe” — it’s so good and funny and smart that you forget that it’s almost an all-AAPI cast (Sasha’s friend Veronica is played by Michelle Buteau, who’s Haitian and Jamaican). Even Marcus’s bandmates include Karan Soni, who is India-born and Charlyne Yi in a too-small part.

You forget because the underlying love story is sweet and engrossing, and it’s not about ethnicity, even though Asian cultural values color so much of the screen.

Because it’s on Netflix, “Always Be My Maybe” is easy to watch over and over again — and it’s worth the watching, because each time you’ll catch another subtle touch of culture, or another funny bit that you missed before. It’s an endlessly satisfying film, the result of a tipping point that may have been symbolized by “Crazy Rich Asians” but really started five years ago with “Fresh Off the Boat.”