Nikkei Voice: Food for Thought — and Sheltering at Home

Anyone who knows me knows that I love to eat. I’m a foodie. I love restaurants (I’m opinionated about them, too). And, I love to cook. I post photos of my food on Instagram, Twitter and Facebook, and even use the hashtags “#twEATs” and “foodporn.”

I like all food from around the globe, from burgers and pizza to Middle Eastern, Italian, Swedish (thank you, Ikea!), Ethiopian, Mexican, Argentinian, South Asian, Vietnamese, Korean, Filipino and all flavors of Chinese, including American Chinese. I’ve even eaten candied ants and cooked crickets. My gastronomic motto is “If someone somewhere on Earth eats something, I’m willing to try it … at least once.”

But my favorite food, not surprisingly to anyone who knows me, is Japanese cuisine. I love Japanese food. I grew up with it, after all. And I’m proud of knowing about Japanese eats, how it’s done right, what people do wrong and the cultural nuances and the history of the dishes I crave.

As the coronavirus changed our world, I’ve found myself enjoying cooking — both Japanese and non-Japanese dishes even more than I always have. My wife, Erin, is a great cook and specializes in the Japanese food she grew up with, too.

In the two months we’ve been mostly homebound, we’ve served up crazy international mash-ups, some we cooked, some we bought, some we picked up to go, like one night when we had leftover homemade spaghetti, salad, pork tamale, Japanese-style spinach with shoyu and katsuobushi (one of the few vegetables I remember my mom giving us growing up in Japan), as well as Spam and eggs with lots of onion and shoyu.

One night after dinner, when my father-in-law dropped off some salmon and mackerel he grilled for us, I made ochazuke — salmon and furikake sprinkled over rice with green tea poured over it. That’s a flavor I remember vividly from when I was a kid. I even reached further back into my Japanese side to have smelly snotty natto (fermented soy beans) drizzled with shoyu and mixed into hot rice. Then, I doubled down another day for breakfast and had raw egg and shoyu mixed together and poured over hot white rice. Yum! 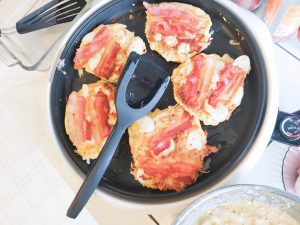 We’ve made okonomiyaki, the savory Japanese pancake (sort of) made with flour and egg and various vegetables like bean sprouts and shredded cabbage with pork belly (bacon) on top. When I wasn’t playing chef, I served as sous chef for Erin, and the other day helped cut up a pork shoulder roast into small strips that she added to miso, ginger and dashi soup and tofu to make butadofu.

It’s been a wonderful adventure. I bet a lot of readers have had some great foodie adventures at home, too. Or, maybe you’re supporting your favorite local restaurants, Japanese or not, by ordering food for pick up or delivery. Hint: Order and pick it up — the food delivery services that many of us have gotten comfortable using charge exorbitant fees to the restaurants, so they actually make less money if you have GrubHub or UberEats deliver dinner. However, when we make a big batch of sumthin’ sumthin’, I’m happy to box up the Tupperware and deliver them to family in my Subaru, calling myself “GuberEats.” Get it?

If you want inspiration, you can find lots of amazing Japanese food videos (in English and Japanese, and the Japanese videos often have good English closed captions) on YouTube. My go-to YouTuber for Nihon-shoku is Namiko Chen, or Nami, and her channel “JustOneCookbook.” Her videos are very instructional, and the blog posts and articles on her website (www.justonecookbook.com) are educational, putting the food into cultural context. She was born in Yokohama but now lives in the San Francisco area. With her husband’s production help filming and photographing her cooking, Nami is an impressive culinary ambassador for Japan. I’ll be interviewing her at length soon, so stay tuned.

I’ll also write how other kids used to think it was gross that I ate raw fish and this stuff called sushi, but how spoiled kids have it once a week and it’s available at supermarkets (it might be bad, but it’s sushi). I’ll write about the Chinese roots of ramen and how it became a staple of American college kids once a Korean Japanese genius first invented instant ramen, then invented Cup-Noodles.

And let’s not forget the contributions that Japanese Americans have made to Japanese cuisine … there’s so much to write about. And so much to eat!

I hope you’re still staying at home unless you need to venture out for food or medicine. I hope you’re all wearing masks outside, observing social distancing and washing your hands obsessively.

Stay safe, everyone, and we’ll get through this together, maybe fatter but healthy.