Nikkei Voice: Mile High JACL Chapter is on a roll, and I’m proud

If you’ve managed to skip over Marsha Aizumi’s eloquent and often moving columns in the Pacific
Citizen, go online and read them. I had the great pleasure and honor of meeting her recently when she came to Denver to speak about her incredible personal family journey, and I was touched by the grace with which she spoke and presented herself — a lot like the way she writes, actually. 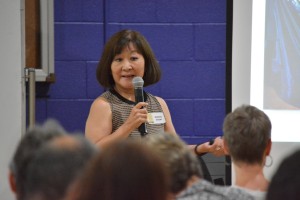 Marsha’s journey is one she’s been on with her son, Aiden. Aiden was named Ashley when he was adopted as a girl by the Aizumi family and came out as a lesbian in high school, then later told his mother he realized he’s a man in the body of a woman. Marsha has supported his transition, and the two have written a book, “Two Spirits, One Heart: A Mother, Her Transgender Son, and Their Journey to Love and Acceptance.”

Aiden couldn’t be in Denver, but Marsha had been asked to speak for a group in the mountains of Colorado, and Mile High JACL was fortunate to be able to have her make an extra stop in Denver.

I’m on the board of the Mile High chapter, but I wasn’t involved in organizing the event except to help secure some food donations for the evening. The board reached out to local AAPI, LGBT and community activist organizations to help sponsor the event. It was a minirainbow coalition, with PFLAG (Parents and Friends of Lesbians and Gays, an organization that Marsha is active with) and One Colorado (a group fighting for gay rights in the state) as well as Facing History (an international group that educates people about racism and prejudice), all standing alongside JACL, OCA, the Denver Asian Pacific American Commission and other Denver AAPI groups. The event was held at the Tri State Denver Buddhist Temple, a hub of the local JA community that is rarely visited by anyone outside the JA or Buddhist community.

The coalition-building and networking between such a disparate audience was a major accomplishment in itself. But Marsha’s presentation, during which she showed a slide show about her son and related the many challenges he had to face, was the highlight. She teared up many times as she shared photos of young Ashley, who refused to wear “girly” costumes and proudly dressed as Zorro for Halloween in one snapshot, and was a “tomboy” and held up her younger brother by the scruff of his T-shirt in another so he wouldn’t slip and fall into the river where they posed.

She emotionally related how Ashley struggled when she reached middle school and the boys she played with stopped hanging out with her and she didn’t feel at home with the girls who became mean and bullying. And Marsha was honest about her own struggles as a parent who had to accept that her expectations for her child needed to change so she could help and support Aiden become the successful married man he is today.

Many in the audience, including me, dabbed our eyes every time Marsha choked up. But by the end, we felt as empowered and awed by Aiden’s bravery in the face of struggle and the strength of his — and Marsha’s — strength of conviction.

Today as I write this, the media is focused on the news from the U.S. Supreme Court that same-sex marriage bans are now ruled illegal. There is already in the air a zeitgeist, a cultural moment that reveals that attitudes about LGBTs are changing: Gay characters are not as rare in Hollywood depictions as they once were; shows such as “Transparent” introduce viewers to the challenge that face transgender people; and Bruce Jenner’s coming out and transition to Caitlyn Jenner has been a beacon for transgender people even as it’s a flashpoint for haters. Haters will continue . . . social change takes a long time, as the African-American civil rights struggle proves. Just when we might think we’re “post-racial,” a tragedy like Charleston happens. The phrase “Black Lives Matter” is as current today as it might have been in 1965 if social media hashtags existed back then.

So, the gay rights struggle has reached a huge milestone, and I’m delighted for that. But the journey isn’t over for gays and lesbians, and I bet Marsha and Aiden and their family still face challenges to come. Add to the LGBT equation the critical layer of being Asian — our cultural values bring complexities to our sexuality just as they do to every other aspect of our lives and careers.
I’m glad I got to meet Marsha, and I thank her for her writing and speaking out. I look forward to meeting Aiden someday.

And, importantly, I am very, very proud to be a board member of Mile High JACL. The chapter is doing important advocacy work in the Colorado legislature with immigrant rights and health care, and we also recently brought Los Angeles arts activist and poet Traci Kato-Kiriyama to Denver to teach a full room about how to tell their personal stories. Mile High is kicking butt, and I’m honored to be involved.

Gil Asakawa is a P.C. Editorial Board member and former Board Chair. He is AARP’s AAPI Marketing Communications Consultant, and he blogs at www.nikkeiview.com. A new revised edition of his book, “Being Japanese American,” will be published in August by Stone Bridge Press.