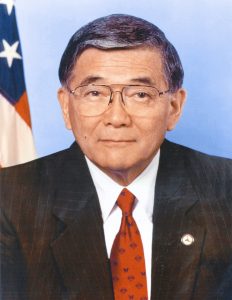 “His cause of death was a heart ailment,” Flaherty added. “He was an extraordinary public servant and a very dear friend.”

Bush went on to award Mineta the nation’s highest civilian honor, the Presidential Medal of Freedom. In a statement, the former president said Mineta was “a wonderful American story about someone who overcame hardship and prejudice to serve in the United States Army, Congress, and the Cabinet of two Presidents.”

“As my Secretary of Transportation, he showed great leadership in helping prevent further attacks on and after 9/11. As I said when presenting him with the Presidential Medal of Freedom, Norm has given his country a lifetime of service, and he’s given his fellow citizens an example of leadership, devotion to duty, and personal character,” the former president added. 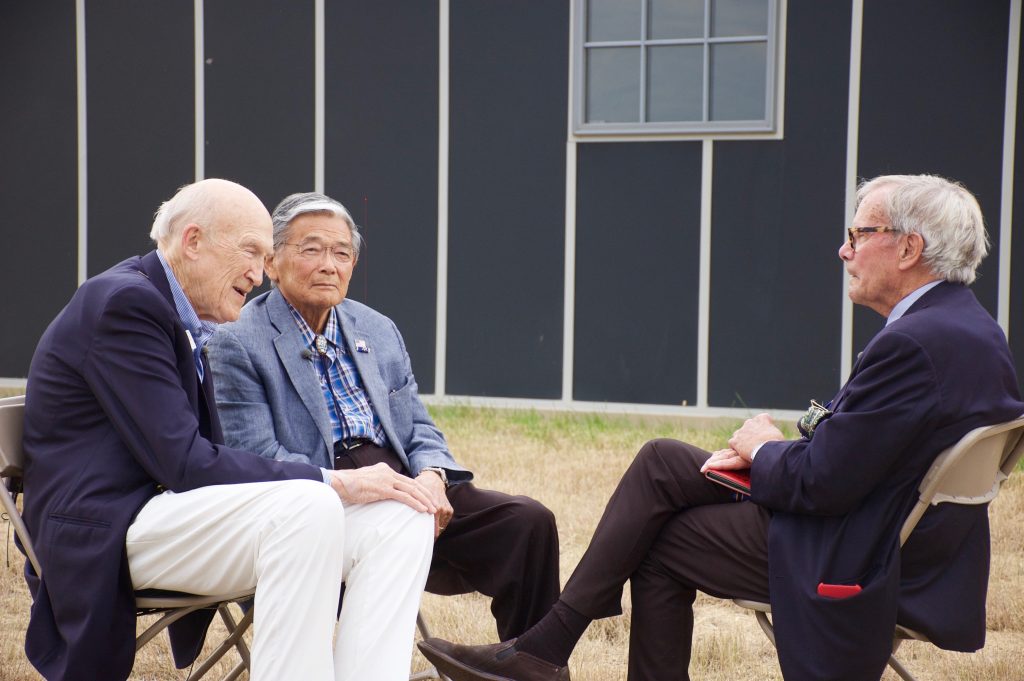 Alan Simpson and Norman Mineta, who developed a lifelong friendship that began while Mineta was forcibly incarcerated in Heart Mountain, Wyo., during WWII, meet with former NBC anchorman Tom Brokaw (right) for an interview for a story that appeared on MSNBC’s “Morning Joe” in 2019. (Photo: Ray Locker/Courtesy of Pacific Citizen)

The son of Japanese immigrants who spent two years of his childhood at a World War II internment camp, Mineta began his political career leading his hometown of San Jose before joining the Clinton administration as commerce secretary and then crossing party lines to serve in Bush’s Cabinet.

As Bush’s transportation secretary, Mineta led the department during the crisis of Sept. 11, 2001, as hijacked commercial airliners barreled toward U.S. landmarks. After a second plane crashed into the World Trade Center, Mineta ordered the Federal Aviation Administration to ground all civilian aircraft — more than 4,500 in flight at the time. It was the first such order given in the history of U .S. aviation.

It was Mineta who was subsequently charged with restoring confidence in air travel in the aftermath of the terror attacks. He oversaw the hasty creation of the Transportation Security Administration, which took over responsibility for aviation security from the airlines.

Within a year, the TSA had hired tens of thousands of airport screeners, put air marshals on commercial flights and installed high-tech equipment to screen air travelers and their luggage for bombs.

The effort was derided at the time for wasteful spending and causing long lines at airports. But Mineta, widely liked and respected in Washington for his deep knowledge of transportation issues, managed to escape the brunt of that criticism.

In 2006, he resigned at age 74 after 5 and 1/2 years in his post, making him the longest-serving transportation secretary since the agency was created in 1967.

Born on Nov. 12, 1931, Norman Yoshio Mineta was 10 and wearing his Cub Scouts uniform when he and his parents were sent to the Heart Mountain internment camp in Wyoming after Japan attacked Pearl Harbor.

He went on to graduate from the University of California, Berkeley, with a bachelor’s degree in business administration and serve as an Army intelligence officer in Korea and Japan. After three years with the military, he returned to San Jose to run his father’s Mineta Insurance Agency.

Mineta’s foray into politics came in 1967, when San Jose’s mayor tapped him to fill a vacant seat on the city council. He won re-election and served four more years on the council before winning the city’s top seat in 1971, making him the first Asian-American mayor of a major city, which now has an airport that bears his name.

Mineta was elected to Congress in 1974 and served 10 terms representing Silicon Valley. During his tenure, he pushed for more funding for the FAA and co-authored a landmark law that gave state and local governments control over highway and mass transit decisions. 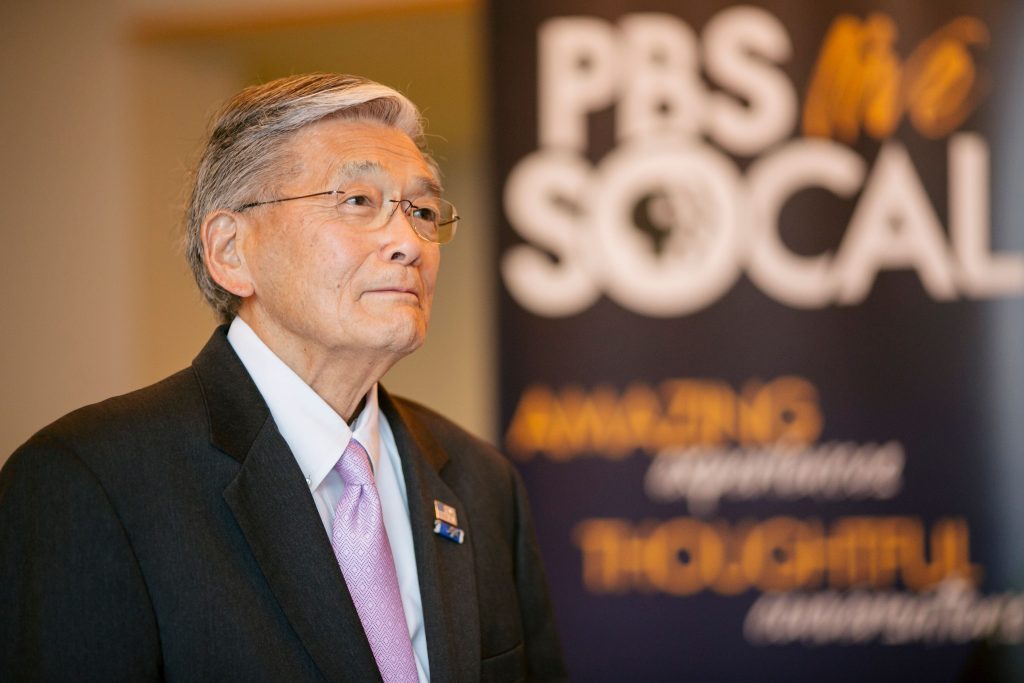 Norman Mineta’s remarkable life and legacy was chronicled in a documentary film “An American Story: Norman Mineta and His Legacy” that aired on PBS in 2019 and was produced and directed by Dianne Fukami and co-producer Debra Nakatomi. (Pacific Citizen file photo)

The co-founder of the Congressional Asian Pacific American Caucus also scored a personal victory when he helped win passage of the Civil Liberties Act of 1988, which required the U.S. government to apologize to the 120,000 Japanese Americans forced to live in wartime internment camps. Former internees also received reparations of $20,000 each.

In 1993, Mineta became chairman of the House Public Works and Transportation Committee — another first — but he quickly lost the job after Republicans won control of the House in 1994.

Mineta resigned from Congress in 1995 to join Lockheed Martin Corp. as senior vice president of its transportation division, which built and operated electronic toll collection systems.

But Washington came calling again five years later when Clinton, in the final months of his presidency, appointed him to replace William Daley as commerce secretary.

Mineta then became the first cabinet secretary to make the switch directly from a Democratic to Republican administration. He was the only Democrat in Bush’s cabinet.

As transportation secretary, Mineta successfully promoted private investment in roads and bridges such as the Chicago Skyway and Indiana Toll Road and helped secure passage of a $286 billion highway spending plan after almost two years of wrangling with Congress.

After overseeing the rapid launch of the TSA, Mineta had his department downsized by almost two-thirds when the TSA and Coast Guard were moved to the Department of Homeland Security in 2003 in the biggest government reorganization in nearly six decades.

After retiring from public service, he joined the public relations firm Hill & Knowlton as vice chairman and settled with his wife, Danealia, in Maryland near the Cheasapeake Bay.