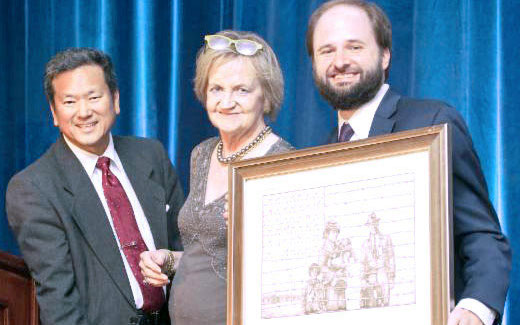 Not Sayonara: The Fight for Justice Continues

JACL National President Gary Mayeda, left, with JoAnn Macbeth and Hampden Macbeth, the widow and son of the late Angus Macbeth, who served as a member of the Commission for Wartime Relocation and Internment of Civilians and authored its report, “Personal Justice Denied.” Macbeth and fellow CWRIC commissioner Joan Z. “Jodie” Bernstein were recognized by the JACL. (Photo: Joe Shymanski)

Among the highlights of the Sayonara Banquet, the JACL awards its President’s Awards to two members of the Commission on Wartime Relocation and Internment of Civilians, as well as warmly welcomes new Executive Director David Inoue.

The Sayonara Banquet for the 48th JACL National Convention definitely lived up to the “remembrance” aspect of the confab’s theme, “Our Story: Resilience, Remembrance, Resolve.”

The nation’s oldest Asian American civil rights organization capped the event, held at the storied Omni Shoreham Hotel, by honoring and remembering key individuals who helped with the success of the Japanese American redress movement.

Fitting it was, then, that this convention took place in the nation’s capital 75 years and a few months after President Franklin D. Roosevelt signed Executive Order 9066, which disrupted and devastated the lives of hundreds of thousands of U.S. citizens and legal permanent residents of Japanese ancestry.

Beneath the evening’s celebration lurked an unease that has arisen under a still-new presidential administration that has acted in ways appearing to echo the dark days of yore when the U.S. government had a failure of political leadership and targeted a small subsection of the population based upon ancestry. 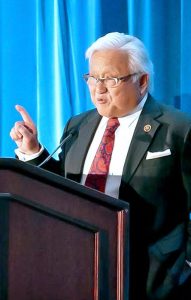 Fortunately, the remembrance did not fail to include accolades for the recently ended 16-year run in the House of Representatives for California’s Mike Honda, who jokingly noted his absence in the banquet’s program.

JACL National President Gary Mayeda thanked Honda on behalf of the organization for “his service in the United States Congress, ensuring that the Japanese American experience and his personal experience of incarceration remains a part of policy discussion and serving as a champion of civil rights and human rights.”

Said Honda, “It’s quite an honor to have those folks from your own community recognize you — I think that’s the highest form of accomplishment.”

Calling JACL his “classroom,” Honda said he learned the processes of government, governing and democracy from his involvement in the group. He also said JACL taught him the art of debate and how “it’s OK to represent a point of view and argue for it and research for it and really stand up for it.”

Honda also acknowledged the evening’s main speaker, the Hon. Norman Mineta, himself a pioneering Nikkei congressman and Cabinet member, for serving as an important role model for “showing how to get things done.”

Honda also issued a challenge to the JACL.

Saying there was “no better place than in Congress than to have a person of Japanese American ancestry,” Honda contended that such a person was needed to “provide that leadership, to provide that perspective and to continue that kind of work into the future of this country because God knows that we need it today.”

Thanks to the hosting prowess of newscaster Joie Chen, the evening moved along and included remarks from new JACL Executive Director David Inoue.

Saying that he was “probably not what you’d expect for an executive director,” Inoue cited his Midwestern upbringing in which he was often the only minority, with a Shin-Issei father from Japan, a Chinese American mother and “no relatives who were incarcerated due to E.O. 9066.”

Inoue also referenced the 35th anniversary of the killing of Vincent Chin, which he described as “particularly poignant for me.”

“It was then that I realized that the system did not always work for everyone,” Inoue said. “This is also our story for the JACL. We learned through incarceration that the system failed us as a community.”

Inoue also said that the JACL must use the “the power of our story” so that the system does not fail others. “It is not an easy struggle, but it is a worthy one,” he continued, “and one that I hope all of you will join me in fighting, both here in Washington and where you live.”

Representing the Japanese embassy in Washington, D.C., was Takuya Sasayama, who congratulated the JACL’s new leadership and newly adopted resolutions.

Two highlights of the banquet were presentations of the President’s Awards, which went to two members of the Commission on Wartime Relocation and Internment of Civilians: the late-Angus Christian Macbeth and Joan Z. “Jodie” Bernstein, who led the nine-person CWRIC as its chair.

Macbeth was in 1981 named special counsel to the CWRIC, the findings of which he wrote and published under the title “Personal Justice Denied,” a work that laid the foundation for the Civil Liberties Act of 1988.

Macbeth died on Jan. 22 at the age of 74, and his award was accepted by his widow, JoAnn Macbeth, and one of their two sons, Hampden. JoAnn Macbeth recalled her late husband’s activities serving on the CWRIC, including when he would spend his evenings at the kitchen table writing what became “Personal Justice Denied.”

She watched her husband, who knew only what he learned in law school about the Japanese American incarceration, change during that time.

“He would really do whatever he could. He would go speak to 200 people, he would go meet and strategize with 300 people, he’d go testify, he’d spend four hours for 15 seconds in a documentary — somehow it seeped into his soul.” 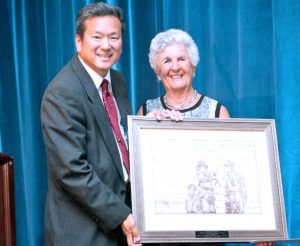 The evening’s other President’s Award winner, Bernstein, was also an attorney who specialized in consumer protection and environmental law, like Macbeth.

“I’m just overwhelmed,” Bernstein said. “I am so thrilled and so honored once again to be with the Japanese community, which was wonderfully supportive of the work that we did, and I want to thank you both for the award and the support that we had when we began the project and throughout. We couldn’t have done it without your help.”

Bernstein mused about Macbeth with her own recollections after his widow, JoAnn, recalled his time on working with the CWRIC.

“I remember him warmly and wonderfully in the role that he played in putting the report together,” Bernstein said. “The report itself is, in a word that is used a lot nowadays, ‘tremendous.’ It is a wonderful historical document that I’m very proud of and that I hope everyone in this room is proud of. I thank you for this honor, and I will cherish it all my life.”

The role of the evening’s éminence grise belonged to Mineta, who stuck with the remembrance theme by relaying his recollections of how redress came to pass, citing the 1978 JACL National Convention, when JACL passed a one-sentence resolution to take steps to seek an apology from Congress on behalf of the American people and obtain redress payments for Japanese Americans who were incarcerated during WWII. 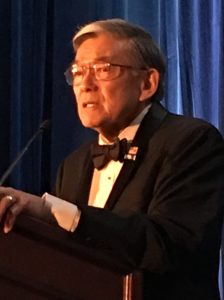 According to Mineta, Inouye said to those gathered, “You know, you’re asking of us a tall order because the American people really don’t know about evacuation and internment, and if they don’t know, then our U.S. senators and House members don’t know, and they won’t know how to deal with this.

“He said there was a Warren Commission about the Kennedy assassination … and people got to know about the assassination,” Mineta continued. “Then there was another commission, about the students at Kent State when they were killed by the Ohio National Guard, to study that. We need a commission to try to figure out what motivated the government to do this.”

Mineta then related how Matsunaga and his staff put together legislation — known as the Commission on Wartime Relocation and Internment of Civilians — that President Carter signed, which led to nine commissioners being appointed and hearings being held at various locations across the country.

“I attended seven or nine of these Commission hearings, and I cried at every one of them,” Mineta said, recalling the often-emotional testimony by Issei and Nisei. “After about two years, the report — ‘Personal Justice Denied’ — was written, which concluded that what happened to ethnic Japanese along the West Coast during WWII resulted from racial prejudice, war hysteria and the failure of political leadership, with a recommendation that Congress issue a national apology and have the U.S. government issue redress payments of $20,000 to surviving victims of E.O. 9066.”

Mineta related one problem, however, and that was how to pay for it.

“We had turned to an actuarial specialist to figure out how many of the 120,000 who were evacuated in 1942 would still be living, and the actuary told us, ‘Somewhere around 80,000,’” Mineta recalled. “So, we geared our budget to authorize and the amounts to be authorized for redress payments as well as for the educational fund, based on what they told us.

“After the legislation passed and as we were making the payments,” Mineta continued, “we realized that there weren’t 80,000 people out there, there were something close to 90,000, and we weren’t going to have enough money in just the redress payment account, so we had to take money away from the education fund and move it over to the amount to be given to the internees.

“And then Sen. Inouye said, ‘You know, for the next three years, we’re going to have to come up with an appropriation of $800 million for this program, and as chair of the Appropriations Committee, I don’t know where we’re going to get that money.

“So, one night, he put a one-sentence amendment to some legislation that was going through, and the redress payments were to be considered entitlement payments, so that means you don’t have to appropriate the money. If you’re a member of the class that is eligible to receive this money, it’s an entitlement, and it comes automatically. It was a brilliant move … and we didn’t have to appropriate the funds.

“And then the first woman to receive her funds was a 102-year-old woman from Los Angeles whose family flew her to D.C. for the attorney general and President George H.W. Bush to make that initial payment,” Mineta said. “A very, very moving ceremony at the Department of Justice, and I know many of you were there at the presentation of that first award.”

Mineta closed his speech with an anecdote about early redress advocate Edison Uno, who would make sure to attend every function possible at which Supreme Court Chief Justice Earl Warren was speaking and ask him if he would apologize for his role as California’s attorney general as a proponent of the forced evacuation.

Mineta noted that Uno never got the satisfaction of hearing an apology from Warren.

“The only time I think — I could be corrected on this — he ever apologized was in his book, and he then apologized nationally for his role as attorney general in the state of California in 1942 and, of course, we all know his record as chief justice of the Supreme Court … unfortunately, Edison had passed away before the book came out,” Mineta concluded. 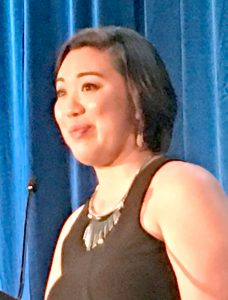 Following Mineta’s address, Chen recognized Stephanie Nitahara for serving as the organization’s interim executive director, who in turn recognized Bill Yoshino, who retired in March after serving for 38 years as JACL’s Midwest Regional Director. Yoshino’s career was remembered with a tribute video featuring comments from the many JACLers who worked with and were inspired by him.

The Legacy Fund winners were: