The 10 additional grantees in six states will tell the story of the more than 120,000 Japanese Americans, two-thirds of whom were U.S. citizens, who were imprisoned by the U.S. government following the Dec. 7, 1941, attack on Pearl Harbor by Japan.

Congress established the Japanese American Confinement Sites grant program in 2006, authorizing a total of $38 million in funding for the life of the program. The Aug. 17 announcement brings the current award total, since the program began, to more than $23 million.

The grants will fund a diverse array of projects that will tell this important story in a variety of ways.

Using grant funds, Yale University will convene a two-day public symposium and develop related high school curriculum in partnership with Brown University to mark the 75th anniversary of President Franklin D. Roosevelt’s signing of Executive Order 9066, which led to the incarceration of Japanese Americans during WWII.

The Chicago chapter of the JACL will use grant funds to engage college-aged students in learning about the impacts of incarceration on Japanese American communities during WWII through educational trips to Los Angeles’ Little Tokyo neighborhood and the Manzanar National Historic Site, and through educational projects and curriculum development, which will be shared with the Chicago community as the project concludes.

Japanese American Confinement Sites grants may be awarded to projects associated with the 10 War Relocation Authority centers established in 1942 and more than 40 additional confinement sites.

The program’s mission is to teach future generations about the injustice of the WWII confinement of Japanese Americans and inspire commitment to justice under the law.

Successful proposals are chosen through a competitive process that requires applicants to match the grant award with $1 in nonfederal funds or “in-kind” contributions for every $2 they receive in federal money.

For more information on the incarceration of Japanese Americans during WWII, visit www.nps.gov/subjects/worldwarii/internment.htm. 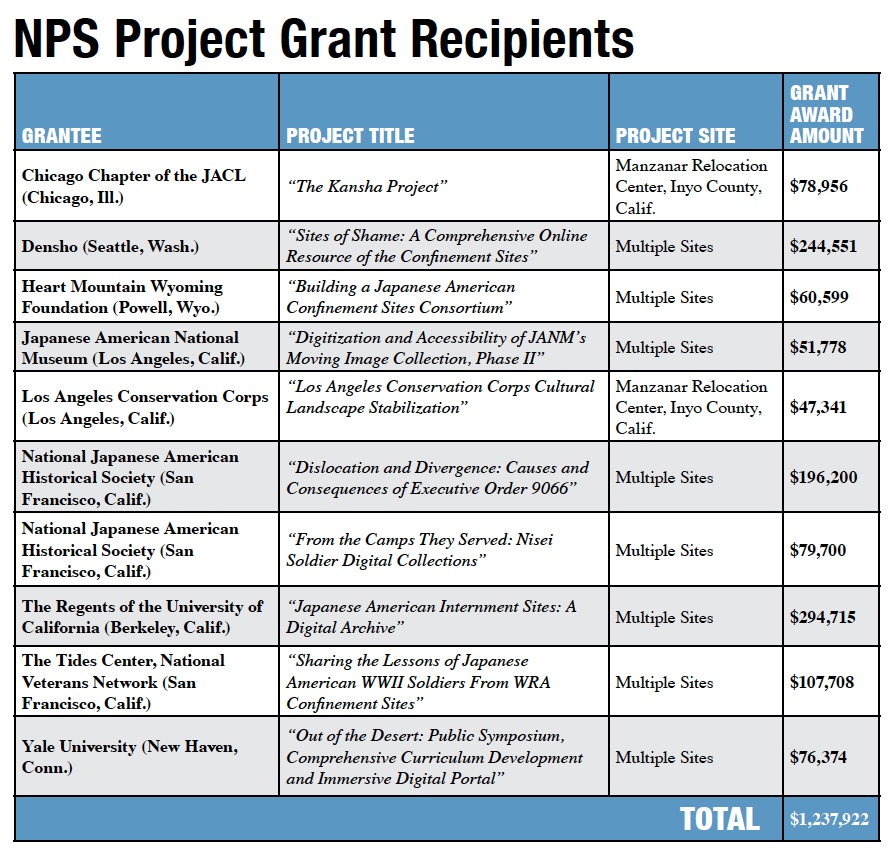