As a former Marine Corps officer who, as a young man took to heart the words spoken at the president’s Jan. 20, 1961, inauguration and would serve his country during the Vietnam War, Hubert Yoshida knows a thing or two about what is necessary to complete a mission. 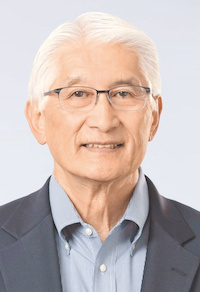 That may be why this past spring, the Watsonville, Calif.-born son of Sumie and Kenzo Yoshida, who still has boyhood memories from the Poston War Relocation Authority Center, completed a long-simmering mission: publishing his book, “Operation Utah: The Die Is Cast.”

One might presume that Yoshida began that book-publishing mission in 2020 with the free time gained upon retiring as VP and chief technology officer at Hitachi Data Systems after 22 years, which was preceded by about 25 years at IBM.

Then again, maybe that mission began in 2016, when he returned to Da Nang, Vietnam, on a work-related trip and had the occasion to have a cordial meeting between a former enemy, a Viet Cong general named Mr. Tu who had fought in Operation Utah against South Vietnamese forces and American Marines.

More realistically, however, it could be said that Yoshida’s mission to publish “Operation Utah” really began in March 1966, when he was a platoon commander in H Co., 2nd Battalion, 7th Marine Regiment.

Becoming a Marine was not necessarily, however, something that carried over from when Yoshida was a young boy, the way a lad might think about becoming a cowboy or a fireman. In fact, he would go on to study physics at the University of California, Berkeley.

One day, President Kennedy himself visited the physics lab. Yoshida remembered the president’s words from inauguration day. “When he was leaving, I felt that he and I had made eye contact for just a split second. I was inspired,” Yoshida told the Pacific Citizen.

Despite the inspiration Yoshida and others of his generation gained from Kennedy, the atmosphere at Berkeley was of foment and unrest. But it was not just Berkeley. Something was in the air. As Bob Dylan would squawk, the times they were a changin’.

“I felt that I needed to do more than just hide behind my university exemption,” Yoshida said. “It all seemed so banal, so I felt compelled to join the fight and do it with the best, the Marine Corps.”

Yoshida applied for Officer Candidate School and in the best tradition of military intelligence, the math major was rejected. But that didn’t deter him. He enlisted, much to the chagrin of his parents. It mattered not to Yoshida. “It was the best decision in my life,” he recalled.

He did so well in boot camp that Yoshida would be awarded the American Spirit Medal. Thanks to that and his college degree, officers at the Marine Corps Air Station El Toro, where he was later stationed, resubmitted his OCS application — and this time, it went through.

Operation Utah took place from March 4-7, 1965. During the years of the Vietnam War, Americans would become familiar with such events as the Battle of Ia Drang, the Tet Offensive, the Battle of Khe Sanh, the Siege of Hue, the My Lai Massacre and, of course, the Fall of Saigon.

But Operation Utah? According to the Morgan Hill, Calif.-based Yoshida, “there hasn’t been much documented” about it, even though it was the first head-to-head battle between the Marine Corps and the NVA or the North Vietnamese Army — and for the Marines, it was a tragic and bloody lesson that resulted in 278 Americans wounded and 99 killed in action, with three more deaths that resulted from wounds. The NVA, meantime, suffered a body count of 600.

Why was it a lesson for the Marines? Yoshida is blunt in his assessment.

“The Marine Corps did things wrong. I mean, they assumed that they could use a lot of artillery and aircraft and be dominant,” he said. “They’re fighting these primitive Third World countries — but it’s really the boots on the field that have to make the difference.” As it turned out, the Marines “were outnumbered two, three, four to one.”

Not only were they outnumbered, Yoshida said the NVA “had the latest AK-47s, they had mortars, they had recoilless rifles. I mean, they were an army. They weren’t Viet Cong because up until then, we were fighting Viet Cong, you know, chasing guerrillas around. It wasn’t a pitched battle like this.”

The mindset and commitment at the time was that Vietnam would simply be a “temporary action” and that the U.S. was there to “stabilize — and then leave the South Vietnamese in charge.” That misreading, says Yoshida, “kind of set the tone. That’s why I say, the die is cast.”

Operation Utah drove home the realization that “this is going to be a long, long war.”

After meeting his former enemy in 2016, Yoshida wrote a blog about the encounter. As might be expected in the internet age, Yoshida related how “people started contacting me asking about relatives they had that were in Operation Utah.”

“I started corresponding with them and remembering all the people that I had known,” Yoshida said. He realized that what he personally encountered in Operation Utah was just a small portion of a much larger picture. “You don’t know what the rest of the battle was like. So, I started researching it and got to meet a lot of the veterans from different units.”

The long-gestating mission crystalized with a simple realization: He needed to document it.

“I’ve got to let these people know, the relatives and the families and friends, what happened to their particular loved ones. … I wanted to write a book to honor them.”

Although the book is now complete and the story of Operation Utah has been corrected and documented in greater detail than ever before, with the stories of those who paid the ultimate price memorialized, Yoshida knows what he encountered has not been purged from his mind — and that it never will be. 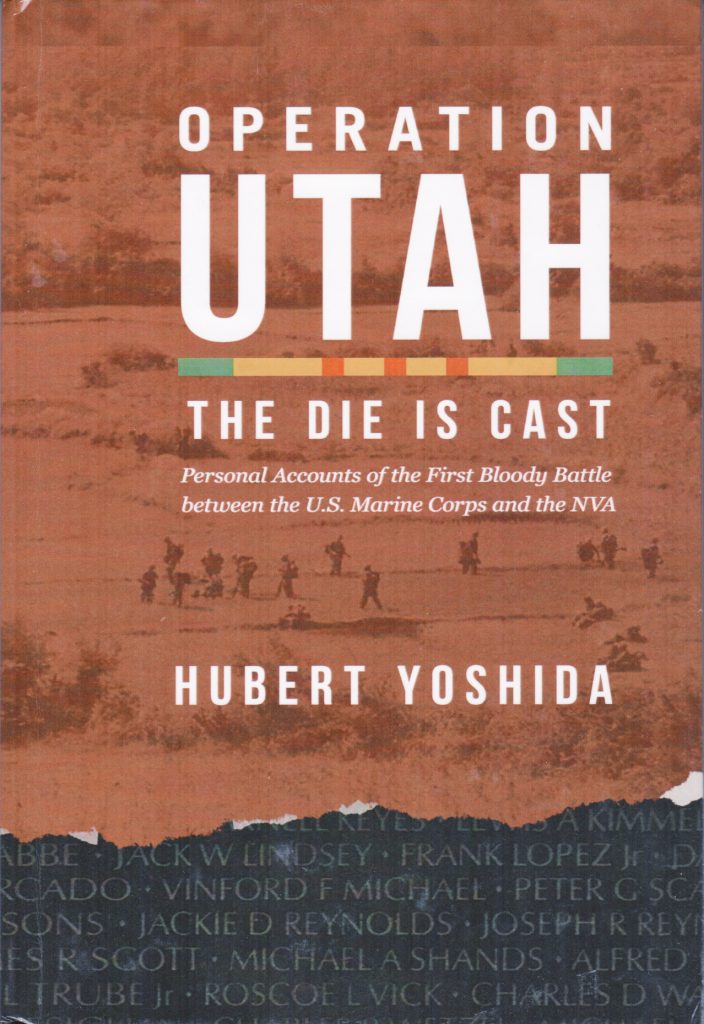 “Being in combat is something that stays with you. Just about every night, I think of some of that,” Yoshida told the Pacific Citizen. “What happened, what I did, what I didn’t do — and it’s just something that’s part of you, then, for your life.”

‘Operation Utah: The Die Is Cast’

“Operation Utah: The Die Is Cast” is a book about the very first battle the Marines and South Vietnamese Forces fought against the North Vietnamese Army in the Vietnam War.

It is remarkably detailed in its coverage of what happened in that historic battle from March 4-7, 1966, in Vietnam’s Quang Ngai Province. The author, Hubert Yoshida, a Japanese American Sansei who as a young boy spent time with his family in an American concentration camp in Arizona, first enlisted in the Marines and later, after overcoming discrimination, became a commissioned officer who led a successful assault to rescue another platoon overrun by the North Vietnamese Army.

In “Operation Utah,” Yoshida has written one of the most accurate and detailed accounts of a historic battle in Vietnam ever to be published.

I had the fortune of reading “Operation Utah” and was mesmerized by the almost minute-by-minute account of the utter terror and brutality the Marines of 2nd Battalion, 7th Marine Regiment, experienced when they first encountered the North Vietnamese Army on March 4, 1966, followed by the momentous and bloody subsequent battles involving other battalions and regiments of Marines through March 7, 1966.

The book describes in vivid and meticulously arranged detail the evolution of the battles in chronological order and elucidates how the Marines, through their sheer guts, grit and esprit de corps were able to survive it. It is a virtual compendium of narratives of what happened to seemingly every Marine and Navy Corpsman that participated in Operation Utah.

The book’s chapters end with brief blurbs on the outcome of the surviving Marines, with the final chapter serving as a fitting photo gallery, tribute and somber epitaph to the Marines that were not so fortunate.

As a Japanese American Sansei myself who, as a commissioned officer in the Marine Corps, led a Combined Action Platoon in Danang South Vietnam, I can appreciate to some degree the rigors of training required to become a Marine and the elements of jungle combat in Vietnam.

“Operation Utah” makes clear that the culture of the Marine Corps is unique amongst the branches of the U.S. military. It’s evident that the core values of honor, courage, commitment and grit are integral to that culture.

In Marine Corps Officers Candidate School (OCS), the staff try to both assess and instill into a candidate these core values. To me, commitment and grit are the qualities that give a Marine resilience in the face of adversity and compels him or her to persevere through to victory as the Marines in Operation Utah so ably demonstrated.

OCS training in the Marine Corps has a particular process that can be exemplified by my own personal experience going through it. I suspect Lt. Yoshida had a similar experience, if not more harrowing.

Near the end of the 10-week program, I vividly recall one morning being ordered by the platoon sergeant to don a Chinese coolie hat and black pajamas, step on the squad bay stage and growl back at the platoon candidates.

Although perplexed, I did as he ordered, and the platoon sergeant then bellowed to the candidates, “This is what the fricken’ enemy looks like — when you get to Nam, you destroy it, do you understand!” Initially, I felt insulted, offended and angry, but I held my composure, believing a Marine should not become rattled under any circumstances.

As fortune would have it, that was the proper response because immediately thereafter, the platoon sergeant pulled me to the side out of earshot of the other candidates and whispered, “Candidate Miyoshi, you’re going to make a fine lieutenant.”

Mind you, at that time, no other candidate knew whether they were going to be commissioned a 2nd lieutenant. Eight days later, the commissions were announced just prior to graduation on Dec 16, 1966.

David M. Miyoshi is a Los Angeles County-based attorney who specializes in international business, real estate and estate planning. He is active in veteran’s affairs in the Southern California area and publishes a free monthly newsletter on current international financial, economic and political affairs. His website is miyoshilaw.com.