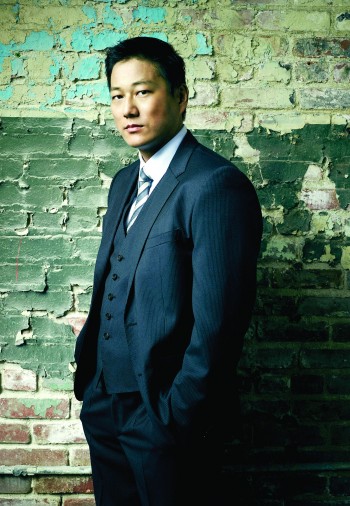 ‘Better Luck Tomorrow.” “The Fast and the Furious” series, “Bullet to the Head.” These are some of the films where Korean American actor Sung Kang has been able to flex his muscles and hone his acting resume, and now he’s taking on a new role in Fox’s “Gang Related,” a new TV series premiering May 22 about an elite Los Angeles police task force that takes on the city’s most dangerous gangs, including one gang to which a task force member has specific ties. The Pacific Citizen spoke recently with Kang on his new role and his emotional connections to his “Fast” family. 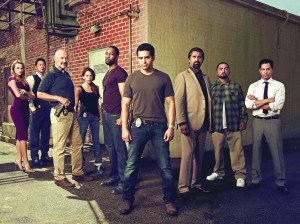 Pacific Citizen: What drew you to the role of Tae Kim in “Gang Related”?

Sung Kang: First of all, it’s always a wonderful gift when you have a friend that creates the role for you. Chris Morgan, who was the writer for “The Fast and the Furious” 3, 4, 5, 6 and 7, called me and said he had a pilot that he had developed, and he had a role that he had created for me. He was wondering if I would like to come play with him and join this team. And that in itself — how often as an actor do you get somebody to create a character and give you a stage where you can shine? We’re friends, but he also knows the kind of work that I strive for as an actor. It was just a wonderful thing, and then we get to collaborate and bring this character to life: It’s an introduction to a Korean American character in a fictionalized setting; he has a dark past, but he’s fighting for good. There are themes of family in “Gang Related” — [Tae Kim] has integrity. There are so many layers with this guy, but yet also it’s make-believe, it’s Hollywood, so there are these cool aspects to it where there’s a sexiness, coolness and a machoness to this guy. So as a man, as an actor, it’s just a wonderful gift to receive an opportunity like this.

It’s great that you mention layers to your character in “Gang Related.” In the pilot episode, you see Tae as very methodical, able to hide his true feelings and knowledgeable about life in downtown Los Angeles, Koreatown in particular. There’s one scene where your character picks up burning pieces that are used to brand gang members, and he successfully hides the searing pain. With that in mind, do you think there are any similarities or differences between you and your character? 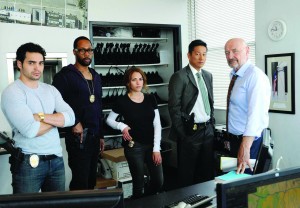 The special police task force unit in “Gang Related” navigates the streets of Los Angeles to tackle and bring down some of the city’s most notorious gangs.

Kang: Absolutely — all the tough-guy stuff is make-believe. I’m holding this burning thing in my hand and claiming I’m invincible to pain, so that stuff — there’s a lot of glamorization and that was what I was alluding to earlier, the fun part. But there are scenes of the character in “Gang Related” of loyalty to family and fighting for good, and I think these are themes that I try to live by. I think that there’s an integrity that I try to live by, and I think about how if Sung was in the position of this character Tae Kim, how would he react?

And some of the things I can relate with the things that Tae Kim’s fighting for — he has a dream, he has a dark past he’s trying to shake off, he’s always striving to better himself. So, I think those universal humanistic goals, that’s where, if I had to say Sung and Tae had some things similar, that probably would be it. All the cool stuff, all the tough-guy stuff, I’m only a human being — I’m not really a tough dude, that’s the Vin Diesels and the Dwayne Johnsons.

There’s also a ton of stunts and action scenes in the series. Did you do anything in particular to prepare for the physicality of this role? 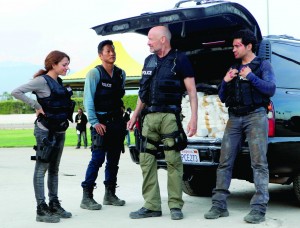 A scene from “Gang Related” with (from left) Inbar Lavi, Sung Kang and Terry Quinn.

Kang: The great thing about having the support of a studio system is that they always allow you to have access to the best of the best. So, if we need consultants to talk about what the FBI or what the LAPD does day to day, how to properly hold a gun, all these things — it’s kind of like being on a Major League Baseball team. Those resources and those educational things are at your whim, and that’s pretty awesome. For the physicality and getting into the mind of an FBI officer, those things and those resources were so available. I give credit to Chris Morgan and Scott Rosenbaum, the showrunner, and Fox for always being so open and allowing those resources to exist.

You talked about Chris Morgan and “The Fast and the Furious.” Are there a lot of people, either actors or behind-the-scenes crew, who worked on “Fast” along with “Gang Related”?

Kang: One of the actors plays a recurring guest star, a really strong guest star on one of our episodes. A lot of the stunt team — any time there’s some car-related action or just high-intensity vehicle stuff, there’s always overlap with “The Fast and the Furious.” Even Paul Walker’s stunt double worked on our show. And, of course, we have Chris Morgan — Hollywood is quite small.

In what way? Can you elaborate?

Kang: There tends to be a lot of overlap, and I think when you’re lucky enough to shoot in L.A. and be in this business for years, and something tragic like a loss of a friend like Paul (Walker) happens, it’s nice that there’s a community that is actually there for you. There are condolences, and there’s support — so I have to say, that’s how I noticed a major, major overlap. And the people associated with “The Fast and the Furious” also worked on “Gang Related.” [We were all] emotionally connected.

You talked about shooting in L.A., and “Gang Related” does a great job of showcasing different parts of the city such as the First Street Bridge and Boyle Heights. What was it like to film in so many different locales in the city, and what was the filming schedule like?

Kang: It was a four, five-day workweek, on average about 13 hours. But for an actor, at least for me, it never feels like work. I feel like I show up to a place and play pretend for a living. But in terms of the hours and being in L.A. — what a blessing. Even if you work late hours, you can drive home and be with your loved ones; that was pretty cool, and I haven’t shot in L.A. in a long time. I think we really lucked out that Fox supported the idea of us shooting in L.A. But not only that, it really helps, as they say, to bring that environment to life. In fun, exciting and well-crafted shows, the city is the character, right? So, we not only got to see parts of L.A. that I’ve probably never been to but also when we shoot there, [it allows] people to be introduced to a new character and this side of Los Angeles.

Do you have a scene of which you’re particularly proud?

Kang: I have a scene in Episode 7 where my character goes to visit part of his past, and I’ve been able to do some of the best work that I’ve ever done in front of the camera. 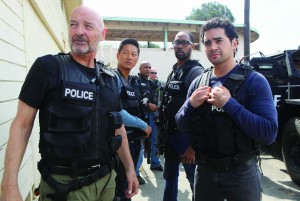 The elite Gang Task Force in a scene from the show “Gang Related”.

And how about as an actor, in general?

Kang: In terms of favorite moments as an actor, those are wonderful victories for me where you get to delve into a character emotionally and where the writing supports a level of acting — the thing that drove me to pursue this dream as an actor. And all the moments with the rest of the cast and crew when we go on location. Let’s say we have a night shoot, and during those moments where we’re moving the camera, we’ve got a quick break — all those little moments and all those conversations of bonding and getting to know each other — I think those moments are priceless. It’s like you get to go to camp every day and hang out with a bunch of people who all have the same dream of make-believe.

In the show, the characters are so diverse. They come from all walks of life and speak so many different languages. You also get some screen time to speak Korean. Growing up, did you speak the language?

Kang: I did get to speak Korean, and I do speak Korean — I would probably say at a third-grade level, it’s very elementary. But it’s funny — there’s an episode where there’s four different languages in a one-hour show, so back-to-back. And me being able to introduce the American audience to a Korean American — a guy they maybe recognize and are desensitized to, but now I’m introducing this Korean part of my culture.

How exciting for you to be able to introduce your culture to a wide audience.

Kang: There were challenging moments — a lot of things get lost in translation, but fortunately, we are in Los Angeles. It’s the largest Korean community in America, so there’s an abundance of Korean people willing to help. I get a lot of love from the community — when we get to shoot in Koreatown, they’re supporting, they want their brother to represent well. We have a lot of support from the community — I think we’re representing three dimensionally, so that was exciting. And if we get picked up for another season or two or three or four or five, it’s going to be cool to have scenes with other Asian characters and be able to employ other Asian actors because of my character and this Korean or Asian story line. I’m excited about that, the potential — it’s pretty cool.

Anything else that we can look forward to with your character this season in “Gang Related”?

Kang: I think people are going to get their hearts broken — there’s a lot of emotions out there this season. So, I hope that makes people want more and wonder where this character’s going or where he came from. There’s a wonderful seed that’s planted this season, and it’s kind of up to the audience to pour water on that and let it grow. I’m really excited, the potential of that character growing into something.