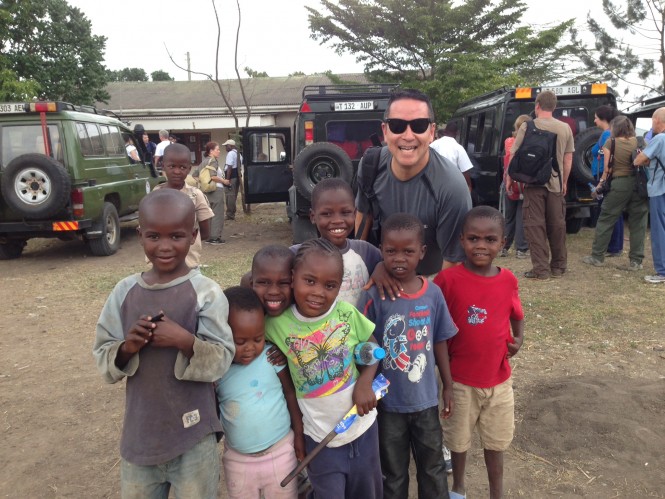 Out of Africa With Rod Kuratomi

As part of a volunteer medical team from Huntington Memorial Hospital, Kuratomi heads to Tanzania to provide health care for local villagers and returns having personally experienced far more than he expected.

Individuals dressed in brightly colored clothing, holding a spear along with a cell phone. Huts constructed of mud and sticks built across plains. Translators that communicated in Swahili and English. Rod Kuratomi was taken in by all the sights and sounds of Africa during a recent medical mission in Tanzania. 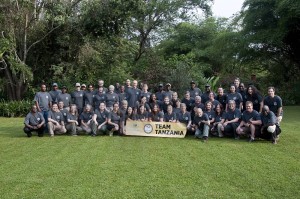 From Feb. 1-19, L.A. native Kuratomi worked with a volunteer medical team as part of the Phil Simon Clinic Tanzania Project (Tanzania Project for short). The group, led and organized by infectious disease doctor Kimberly Shriner, is affiliated with Huntington Memorial Hospital in Pasadena, Calif., where both Kuratomi and his wife, Cheryl, work in the laboratory. This year, Kuratomi joined the Tanzania Project for the first time while his wife made her sixth trip with the group — he was amazed by all that he experienced.

“There are so many wild animals out there — the first time I saw a giraffe, I felt like I was the guy in ‘Jurassic Park’ seeing a dinosaur for the first time because I had never seen a wild animal outside of a zoo. An animal like a giraffe or an elephant, or anything like that — so to see all these wild animals running around wild everywhere was just unbelievable,” said Kuratomi in a phone interview. 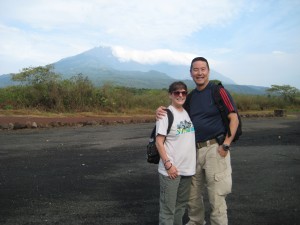 Rod and Cheryl Kuratomi pose for a picture with Mount Meru in the background. Photo courtesy of Rod Kuratomi

The Tanzania Project first began as primarily a HIV treatment and education program. Over the past 12 years, it has become a traveling surgical and health care clinic that provides medical services in rural areas of Tanzania.

“[Cheryl] told me about it for so many years, and she really wanted me to know what they were doing over there and the kind of experience that she was having. And she said it’s a really life-changing experience — you have to see it to understand it. So, she said, ‘I would really like you to go one time so you can see what it is that we’re doing over there and understand why I’m doing what I’m doing,’” explained Kuratomi. “So now that I’ve been there, I very much understand, and I will probably continue to do this from this point on. Currently, they want to do this every two years, so the next trip is scheduled for 2016, and I’ll be going then as well.”

The Tanzania trip was eye-opening for Kuratomi, who in his spare time serves as a karate instructor for the International Karate Assn., where he is a 6th degree black belt, and as director of the Nikkei Games, where he also organizes the annual karate tournament. For their trip, Rod and Cheryl Kuratomi flew from LAX airport, made a layover in Amsterdam and arrived in Arusha, a city in northern Tanzania. 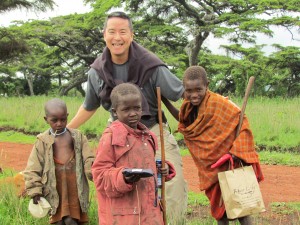 Rod Kuratomi with local children in the countryside near Negrogoro Crater. Photo courtesy of Rod Kuratomi

“There were very few paved roads there, so we spent a lot of hours on dirt roads, in one case as many as five hours from one paved road to another. Five to six hours on a dirt road is much different from five to six hours on a paved road because it’s dusty, it’s bumpy and it’s really uncomfortable,” Kuratomi recalled. “Even from our lodge where we were staying, the average drive to the clinics was one hour each way. The commute on a dirt road is much more difficult then driving on a paved road — we really appreciate the highways in the U.S.”

“These people have nothing and no way of getting any type of treatment — it’s very, very difficult for them. Yet, even though they have nothing, they seem to be much happier than us Americans who have everything, who don’t appreciate what we have and don’t understand. We can’t put in perspective what our problems really are. When we have our electricity go out or the TV’s broken or the Internet’s down, we think it’s the end of the world, whereas these people have real basic problems like getting enough food to eat, getting enough clean water just to survive and access to health care,” Kuratomi said. “We get sick, we go to the hospital. If we get don’t have any money, we could get health care by going to a state or federal or city facility. But there, they have nothing, yet they seem to be happier then we are.” 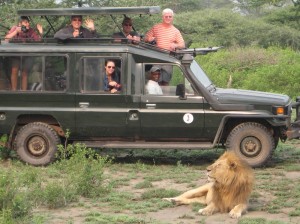 Project Tanzania members also experienced a photo safari in the Serengeti during their time in Africa. Photo courtesy of Rod Kuratomi

The volunteers worked with the Massai, a tribal group that resides in rural Africa without running water or electricity. All the water had to be hand carried from a central location, whether from a local river or a tap in a nearby town.

“Imagine carrying a five-gallon bucket of water on your head for miles. Clean water is a big issue here, and many water-borne diseases are rampant. The Massai people have lived the same way for centuries and survive by tending goats and cows,” described Kuratomi.

During the medical mission, Kuratomi was part of the laboratory team that conducted diagnostic tests. He also assisted in the screening of patients for the triage portion of the clinic, determining patients who were the most sick and needed the earliest care.

“All the people who went on the trip — I think they were hand-selected not only for their specialty but also their personality. Everyone got along very well. Nothing in Africa goes smoothly as you would expect it, so you have to be flexible and adaptable to make things work. We always have to think outside the box. For instance, in the middle of surgery, the electricity goes out, the surgeons have a patient on the operating table with no lights, so they have to use flashlights,” said Kuratomi, who has worked in the laboratory at Huntington Memorial Hospital for 26 years. “That would never happen in the United States, but you have to be adaptable to handle any unexpected situations that might come up.”

It was Kuratomi’s first time visiting Africa, and he noted several problematic medical conditions among the patients, like bones that were never set.

“Our orthopedic surgeons were able to perform surgeries that enabled the use of a leg or arm long crippled from a past injury. Since all cooking is done over an open fire, there are many serious burn injuries. In a past trip, a woman that had her arm permanently fused to her body from a burn injury had her arm surgically freed, which enabled her to hold her child in her arms for the first time,” noted Kuratomi. “Cleft palates are also not usually repaired like in the U.S. — this is a popular surgery for our team. This year we also performed a total hip replacement.”

He also saw how the patients traveled far and wide to seek medical treatment.

“A lot of our patients would walk five to 10 miles to come to the clinic, and some of them are elderly, carrying small children on their back, and we would get swarmed with a couple of hundred people every day. At best, we were maybe able to see 120 every day, so it was really heartbreaking to send people home and tell them to come back tomorrow when you know that they had to go through so much hardship to get there,” Kuratomi said.

“Our group has made great strides in HIV/AIDS education and the disease, which spread unchecked previously and is now on the decline due to education and treatment. We have also been able to treat malaria, which is the No. 1 cause of illness in the country,” Kuratomi continued.

He cites that the trip is possible through community donations, and the team took small trinkets like toys, toothbrushes and hats to gift to the village children.

“They don’t have the money for it, nor do they have access to it. Anything that we can bring them, anything along life’s basic necessities that they could use, they appreciate everything,” Kuratomi said. “This trip is possible through donations, so the medications, the surgical supplies — all of this is through donations made to the nonprofit organization, so there’s a constant need of funding in order to make these trips possible. We pay our own transportation and lodging to get there, but there’s also a huge overhead of medical supplies and drugs that are necessary to make the trip successful. So, we’re always looking for people that are willing to make tax-deductible donations for a very worthy cause.”

To find out more about the Tanzania Project or to make a donation, visit the organization’s website at http://www.philsimonclinic.org/.