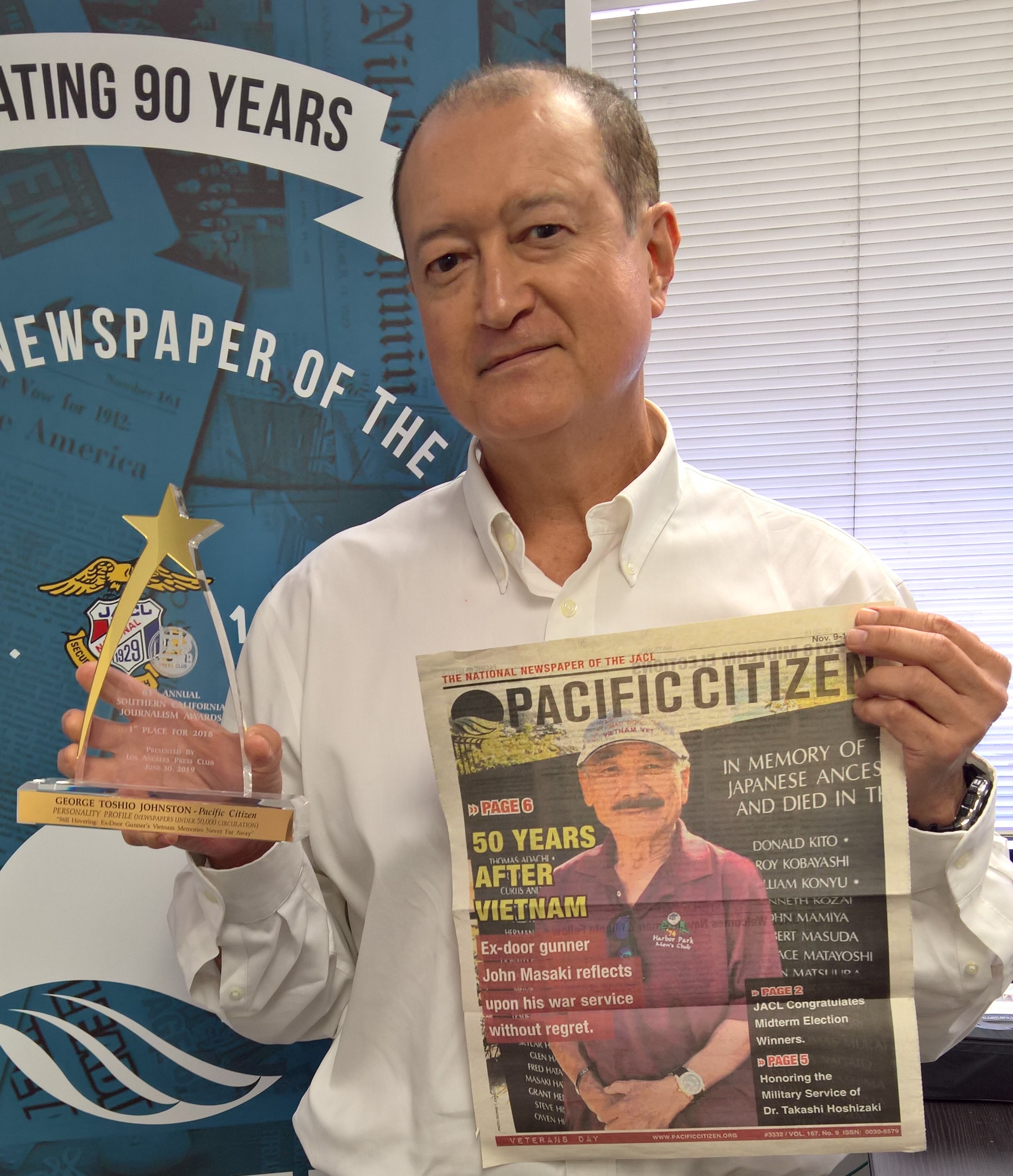 The Pacific Citizen’s George T. Johnston displays the trophy and the cover of the issue that contained his story about Vietnam vet John Masaki, which won a first-place award at the Los Angeles Press Club’s 61st SoCal Journalism Awards on June 29. (Photo: Susan Yokoyama)

The award was in the category Personality Profile for newspapers under circulation of 50,000 and was for a November 2018 story titled “Still Hovering: Ex-Door Gunner’s Vietnam Memories Never Far Away,” about Army veteran John Masaki, who served in Vietnam circa 1968 as a crew chief and door-gunner in a helicopter gunship.

Regarding the category-topping article, the judges’ comment read: “The piece is personal, factual and poignant. That combination makes for a powerful human interest personality profile. It represents thorough journalism.”

The story can be viewed at https://bit.ly/2FKbzrc

“The P.C. is thrilled to have George formally recognized for his story. He thought of the story concept for our Veteran’s Special Issue, and the end product resulted in a feature that truly resonated with our readers and garnered much word of mouth,” said P.C. executive editor Allison Haramoto. “George was able to bring to light John’s heroism in serving his country during the war.”

The first-place journalism prize is Johnston’s second from the LAPC. In December 2017 at the 10th National Arts & Entertainment Journalism Awards, he won in the category Commentary Diversity/Gender for a piece that appeared in Rafu Shimpo titled “Horsing Around Pays Off for Scott Oshita, Todd Minobe,” which focused on one of the members of an Academy Award-winning team that developed the animatronic horse puppet, which is a lifelike animatronic horse used in movies.

In 2018, Johnston also reported on a story about a license plate from Kansas that read “442 JAP.” The story was instrumental in having the Kansas Department of Revenue changing its policy, proscribing use of the three-letter combination “JAP” in its license plates and recalling more than 700 extant plates containing that word. [See https://bit.ly/2FK6Ju8  and https://bit.ly/2FKDwPN]