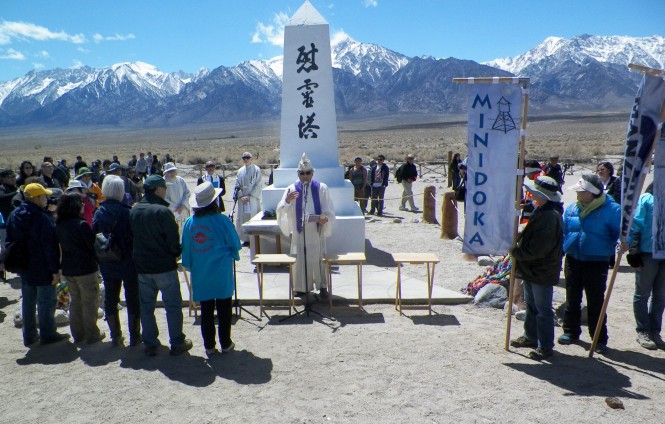 An apple orchard normally conveys a sense of goodness to most hearing the term, but the word manzanar(ITAL), which is the Spanish word for “apple orchard,” would come to have a very different meaning for many of Japanese ancestry in the United States during World War II. And it still does for the more than 1,000 on hand to attend this year’s 45th Annual Manzanar Pilgrimage, which was held April 26 at the Manzanar National Historic Site in California’s Owens Valley.

Thanks largely to the efforts of Sue Kunitomi Embrey and others, the Manzanar Relocation Center site was formally established as a national historic site in 1992 by President George H. W. Bush. The first Pilgrimage was held on site in 1969 and it has continued for 45 years. It is an act of love, respect and remembrance that is, in the words of the Manzanar Committee’s Mission Statement, “dedicated to educating and raising public awareness about the incarceration and violation of civil rights of persons of Japanese ancestry during World War II and to the continuing struggle of all peoples when Constitutional rights are in danger.”

This year’s Pilgrimage was also a “call to action” by the Manzanar Committee to the threat of a large 1,200-acre solar photovoltaic plant being proposed by the City of Los Angeles just a few miles northeast of the camp. 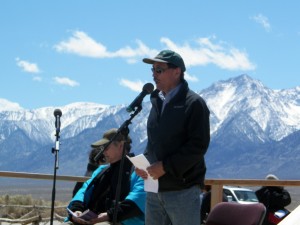 “The Committee feels the presence of such a large industrial-sized solar energy plant would undermine the isolation and desolate historical viewscape that internees experienced, an important psychological component of why they were sent there in the first place,” said the Manzanar Committee’s Gann Matsuda.

With more than 1,000 people from diverse backgrounds attending this year’s Pilgrimage, it was a commemoration as well for the 110,000 Americans of Japanese ancestry that were sent to 10 American concentration camps around the country during World War II. The individual experiences and personal memories of those incarcerated at Manzanar make up the richness of the camp’s history of loss, pain and joy.

The Sue Kunitomi Embrey Legacy Award was presented to Arthur A. Hansen, renowned scholar and co-founder of the Japanese American Oral History Program. The Legacy Award was also given to educator Mas Okui, who as a 10-year-old boy spent more than three years at Manzanar.

This year’s keynote speaker was Eileen H. Tamura, a history professor from the University of Hawai`i Manoa, whose area of expertise has been research focusing on the history of education, Asian American history and historical issues concerning minorities, ethnicity and culture. She is also the author of “In Defense of Justice: Joseph Kurihara and the Japanese American Struggle for Equality.”

Once again this year, the crowd was treated to an exuberant performance by UCLA Kyodo Taiko, the nation’s first and oldest collegiate taiko drumming team.

Before breaking to conclude the official program with the traditional interfaith service at the Manzanar Cemetery Monument, Manzanar Committee Co-Chair Bruce Embrey gave an impassioned plea to those gathered to send letters to the City of Los Angeles expressing their opposition to the proposed Southern Owens Valley Solar Ranch near Manzanar.

At the end of the day, more than 500 students from schools and colleges around the state, along with others on the pilgrimage, came together at the Lone Pine High School Gymnasium to take part in the Manzanar at Dusk Program, where they met and interacted with those formerly incarcerated at Manzanar. The program was co-sponsored by the Nikkei Student Unions at Cal State Fullerton, Cal State Long Beach, Cal Poly Pomona, the University of California, Los Angeles, and the University of California, San Diego. They were also joined by several campus groups from the Muslim Students Assn.

In small discussion groups, participants talked about the importance of what happened at Manzanar and how it relates to what is seen in today’s events and issues. They all agreed that what happened to the more than 110,000 people of Japanese heritage who lived on the Pacific coast of the United States at the time of World War II was neither good nor was it right.

More importantly, they all agreed that it should never be allowed to happen to anyone ever again.