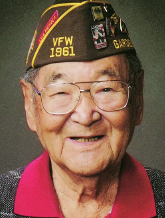 (July 4, 1920-Sept. 14, 2019)
Bannai, 99, served in the California Assembly from 1973-80 and was the first Japanese American to serve in the legislative body. The Colorado-born, Gardena, Calif.- resident was incarcerated with family members at the Manzanar WRA Center in California and later during WWII was in the Army’s 442nd Regimental Combat Team (serving with its artillery arm) before being assigned to the Military Intelligence Service in the Pacific Theater. Prior to becoming an assembly member, he was a city council member for Gardena. Bannai was active in veterans issues and was appointed by President Ronald Reagan as chief memorial affairs director at the VA. Prior to that, he served as the first director of the Commission on Wartime Relocation and Internment of Civilians. Among his Japanese American community activities were participating in Nisei Week and as vice chair of the Japanese American National Museum’s board of trustees. For his Nikkei community activities, he received from the government of Japan the Order of the Sacred Treasure, Gold and Silver Rays “for contributions to the social welfare and prosperity of Japanese Americans.” He was predeceased by his wife, Hideko Bannai, and son-in-law Robert M. Miura. He is survived by his children, Don, Lorraine, and Kathryn; siblings, Rose and Ted; and five grandchildren.