The development of the Salt Palace displaced or closed longtime family owned businesses such as the Aloha Café, Eagle Laundry, Sage Farm Market and many other restaurants, stories, laundries and businesses in Japantown.

All that remains of Japantown today is the Salt Lake Buddhist Temple and the Japanese Church of Christ, which celebrated its 100th anniversary in 2018, on 100 South. In addition, the two churches each own parking lots in the mid-block on the south side of the street.

Recent news about a large-scale development effort located at the northwest corner of 300 West and 100 South and extending diagonally through the block to the corner of 200 West and 200 South has again brought into focus the fate of 100 South between 200 West and 300 West. Several years ago, the city named this one-block section as “Japantown Street.”

Because the new development project, called Block 67, has the potential to create hardships on the two churches and further bury the heritage of Japantown Street, the churches and a supportive community have been engaging the city in efforts to preserve and improve the situation. 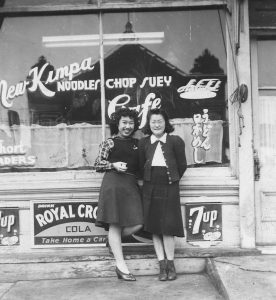 Mary Murakami and Kiyoko Nishida stand in front of the New Kimpa Café, circa 1940.

This represents a clear, defining moment for Salt Lake City. Does it want to preserve the heritage of the street or does it want the street to become a loading dock for big developments as it did with the Salt Palace Convention Center to the east?

So far, the city has expressed a desire to protect the street and preserve its use as a cultural gathering point for festivals. However, making that a reality will require a multifaceted approach that includes new ordinances, investment of scarce resources, funding and futuristic planning.

To make that happen, the Japanese American community must keep this effort in focus over the next several years. Politicians may come and go and without continuous engagement from the community, the promises will be forgotten.

The current status is that the city is meeting with representatives of the two churches — Salt Lake Buddhist Temple and the Japanese Church of Christ — to create a study that will identify critical needs in terms of infrastructure and policy.

Following that effort, the ultimate goal is to obtain community participation in order to create a vision for the future so that realistic funding priorities can be set.

The city has allocated funds to support this effort, and it is expected that it will take most of the remainder of 2019 to complete the first study.

In addition, the developer of Block 67 is also working with the community and has committed to assist in keeping Japantown Street a viable cultural and community center.

The 2019 JACL National Convention will feature a special photographic exhibit of Salt Lake’s Japantown by the Special Collections Department, J. Willard Marriott Library at the University of Utah. 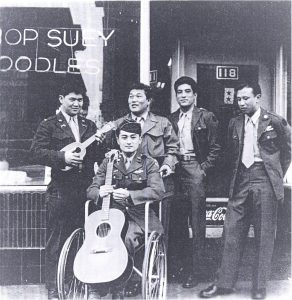 The 2019 JACL National Convention Committee hopes that all those attending the convention will stop by the Japantown exhibit to learn more about Salt Lake’s local JA history and join us in our efforts to preserve and redevelop Japantown.

If you wish to visit Japantown, the NY/SC will be hosting Open Mic/Talent Night on the evening of Aug. 2 at the Salt Lake Buddhist Temple, which is located at 211 W. 100 South.

To find out more about the 2019 JACL National Convention, workshops and to register, visit convention2019.jacl.org.