“A Vigil of Love and Solidarity” was hosted in Leimert Park in South Los Angeles on Aug. 1 by Southern California AAPI Christians. This gathering of church leaders and community members was planned to show solidarity for Black lives. More than 25 churches and organizations participated in the event, which brought together AAPI and Black Christians to gather to pray, sing and listen to words of inspiration. 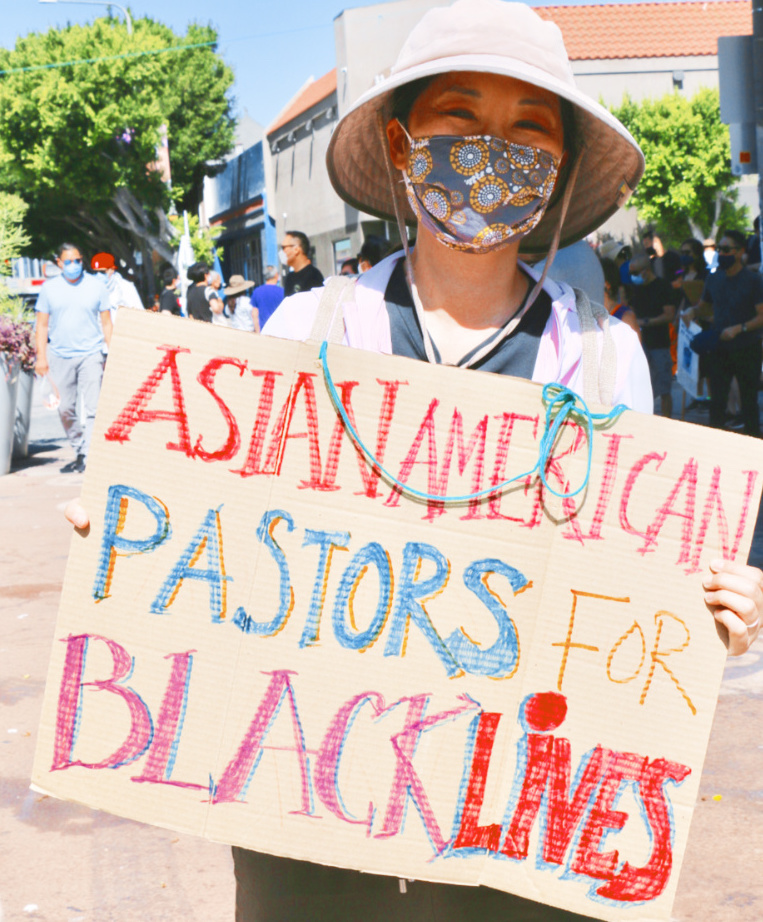 Due to COVID-19, attendees were asked to keep their physical distance and wear a mask throughout the duration of the event, though this proved to be quite the challenge in sunny Los Angeles’ summer heat.

But despite the discomfort, dozens of people showed up and stayed to express their support for the Black community. Those who did not attend in person were able to live stream the vigil online and watch it from home.

With such a rich and diverse history in South Los Angeles, it was fitting the event opened up with a greeting and brief history entitled “Welcome to Crenshaw” by Rev. Gary Bernard Williams, lead pastor at Saint Mark United Methodist Church.

Rev. Williams reminded the crowd of masked faces that Crenshaw and Leimert Park, a now mostly Black South Los Angeles community, was founded in the 1920s during a time when people of different races were not cohabitating or intermingling as they do now.

“[Leimert Park] is a place where Black activism, art and culture happens  …  but it was built for white folks only; we were not allowed,” he said.

Rev. Williams went on to say that things changed after World War II, when Japanese Americans returned to Southern California after being forcibly incarcerated in American Concentration Camps for the duration of the war. 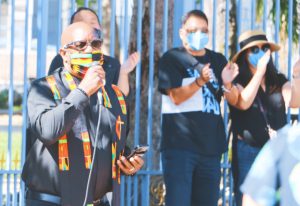 Japanese Americans were the first minorities in the area to break through the racial barriers. When they moved in, they “opened the door for the rest of us, for African Americans, for Hispanics and everybody else to move into this neighborhood, so we celebrate that today in this place,” Rev. Williams proclaimed.

Following that lead, many of the event’s speakers echoed the same sentiments, reaffirming that the longtime relationship between the AAPI and the Black communities is nothing new and because of that, it was our duty to stand up against all injustices, not just our own.

Some speakers touched on the sensitive topic of tension that existed in the communities between Korean Americans and Blacks that came to a head during the 1992 Los Angeles riots.

Confronting that pain is something necessary for both groups in order to build understanding and bring forth the ability to move forward together.

Speakers like Diane Ujiiye, an activist and also one of the gathering’s organizers, delivered some powerful words through poetry. Her poem questioned the AAPI community, specifically AAPI Christians. 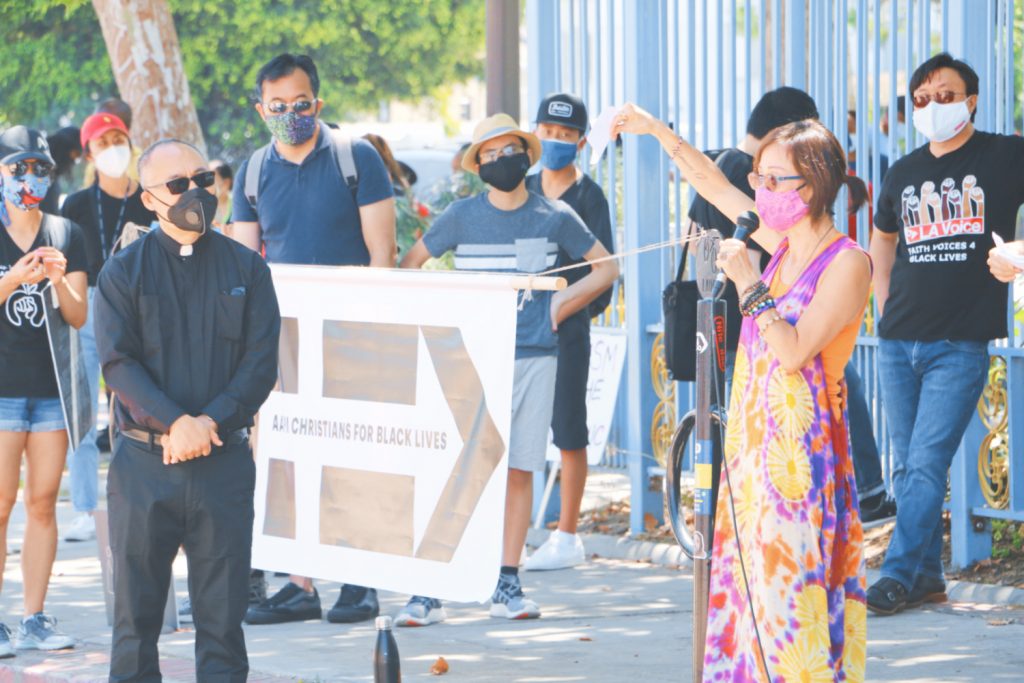 Diane Ujiiye speaks to the crowd.

“So, AAPI church where do we stand? With blue-eyed Jesus on stolen land?” asked Ujiiye, referencing the whitewashing of Jesus’ image and reminding the crowd that Los Angeles is on native Tongva land.

More is to come from the group of leaders who hope to continue these conversations and their work as Christians supporting racial justice.

In addition to the inspirational speakers, attendees also listened to the beautiful words sung by singer Therrey Ilalio to “break every chain” and find “healing in the name of Jesus.”

Prayers and blessings closed the event, and the crowd dispersed to the sounds of beating drums from the African drumming group Daansekou, who perform at the plaza weekly.

All in all, the vigil served as a peaceful example of community solidarity and a meaningful first step toward real healing and change.

Video from the vigil can be found on YouTube on the “AAPI Christians for Black Lives” channel and on Facebook.