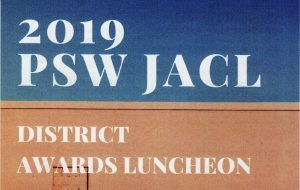 From a pair of steadfast JACLers to a veteran photographer of the Japanese American community to a newly installed leader of a community organization — and more — the 2019 Pacific Southwest District JACL awards luncheon spotlighted several worthy honorees on Oct. 26 at the Torrance Marriott Redondo Beach hotel in Torrance, Calif.

Although later bedeviled by several technical/computer problems, the program began with the recitation of the Pledge of Allegiance, led by past JACL National President Ken Inouye, with assistance from his grandchildren, Amelia, Grace and David.

Following was a crowd-pleasing hula performance by three boys from Halau Hula Keali’i O Nalani, after which PSW Gov. Carol Kawamoto welcomed the audience, thanked Union Bank for its continued sponsorship and then broke format to make a surprise presentation of JACL Sapphire Pins — an honor just below the JACL Ruby Pin — to Linda Hara and Doug Urata for their many years of dedicated service to the JACL. Urata served as the event’s host, along with actor and documentary filmmaker Lane Nishikawa. 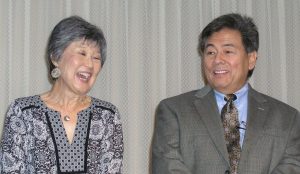 Linda Hara and Doug Urata were each surprise recipients of the JACL Sapphire Pin. (P.C. Photo)

Later in the program, Nishikawa, prior to showing clips from his upcoming documentary about the history of the Japanese American Citizens League, titled “League of Dreams,” announced that the National JACL had just agreed to partner with him on the production of the feature-length documentary to mark the civil rights organization’s 90th anniversary.

Nishikawa also mentioned that his most-recent documentary, “Our Lost Years,” is available to all JACL chapters nationwide as a fundraiser.

“We want you to use it for your chapter to have an event, an educational event, a networking event or a fundraiser, please contact us if you’re interested and I’ll help you set it up,” he said.

Prior to that announcement, Nishikawa introduced Torrance Mayor Patrick J. Furey. The mayor noted that while Los Angeles County is home to the majority of Japan-based companies in Southern California, Torrance is home to “the most Japanese companies in the county of Los Angeles.”

“Between our business partners and residents, we have a vast population of civic-minded Japanese Americans in our community,” Furey said.

Before the break for lunch, Urata introduced the program’s first awardee: Marissa Kitazawa, senior creative producer at Dailey & Associates, who was presented the JACL Service Award.

Urata introduced Kitazawa as, among other things, a “multidisciplinary storyteller” and documentary filmmaker who, in addition to her current duties as vp for general operations for JACL National, also has served as a PSW JACL staff member and PSW district governor. 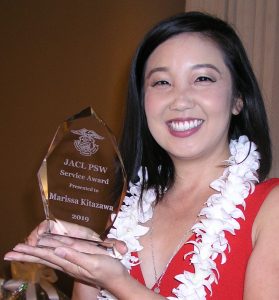 “I owe so much to the JACL community. It was provided me a network of fierce advocates, activists, progressive educators and young leaders — and a lot of lifelong friends,” Kitazawa said.

Kitazawa then related an unpleasant personal recollection from high school that served to steer her trajectory toward involvement in Japanese American and Asian American community activism.

She recalled how excited she was when the topic of the Japanese American experience during World War II was to be examined.

“In my AP U.S. History class, I remember reading one paragraph in the history books. The next day, our teacher was going to tell us more about it,” Kitazawa said, recalling how she knew a little bit from her grandparents but not much more.

“I remember the teacher telling us that Japanese Americans were rounded up and put in concentration camps, and I also remember him saying that no person of Japanese ancestry in the United States was ever convicted of any serious espionage or sabotage during the war. And then he said, ‘But that doesn’t mean it wasn’t true.’

“And then he said, ‘In my opinion, it probably was good that Japanese Americans went to the camps because it was safer for everyone,’” she recalled.

Kitazawa related how she was dumbfounded by this statement from an authority figure and how she was too young to argue against what was said.

Introduced next was Traci Ishigo, who reported the latest from the Bridging Communities program’s Solidarity Arts Fellowship, which was funded by a National Parks Service grant and involved the JACL PSW, NCRR and Council on American Islamic Relations.

“Within the last couple of years, since Bridging Communities, since my time here at JACL, we’ve see such an increase of institutionalized Islamophobia, xenophobia, everything that is happening at the border, with the Muslim ban,” Ishigo said. “In the work that we’re doing with VigilantLOVE, which is where I’m at now, we’ve been really trying to build grassroots movement and a lot of spaces for connection across our communities, from Japanese Americans, Muslim Americans and a lot of other allies to challenge Islamophobic programs, including a surveillance program called Countering Violent Extremism.”

Ishigo added, “Given our history … of knowing what it was to be surveilled,” the challenge is how to engage Japanese Americans in challenging “a lot of the racism we’re seeing in our country.”

The next honoree to be recognized for the Community Service Award was longtime Rafu Shimpo newspaper photographer Mario Reyes, who was introduced to the audience by Nancy Takayama via a prerecorded video produced by Steve Nagano. 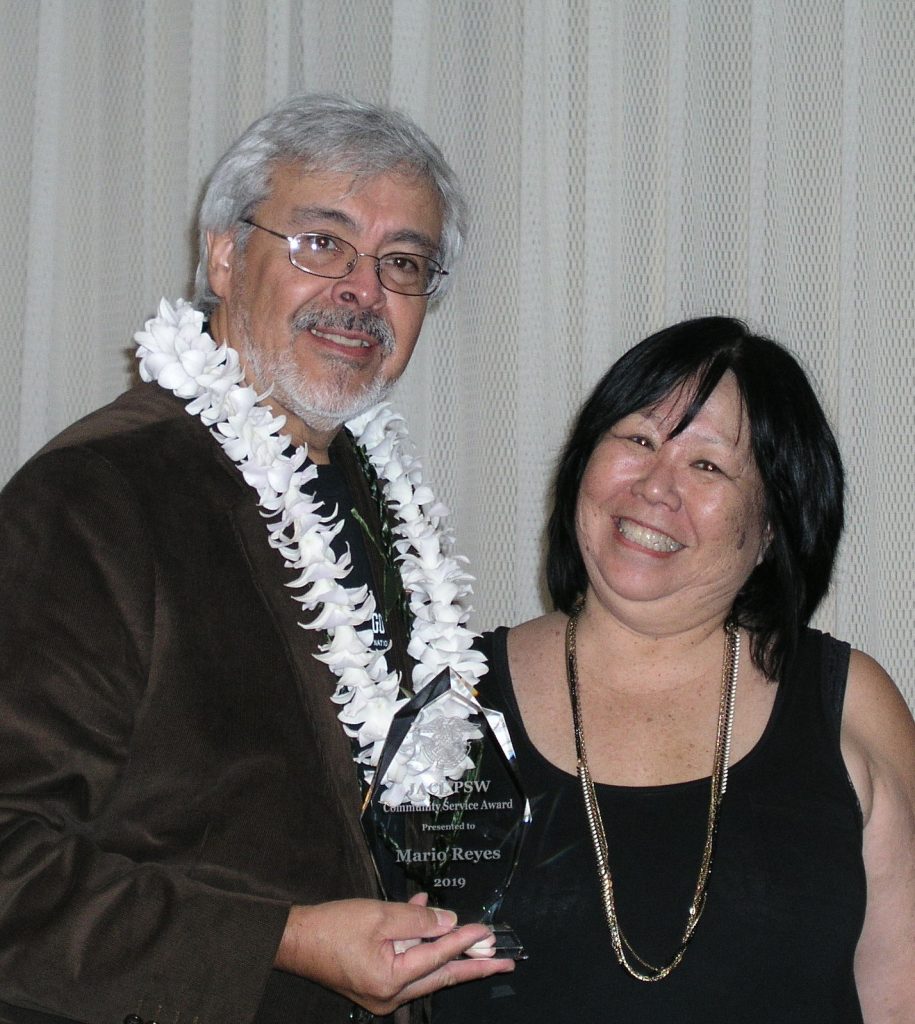 “A picture is worth a thousand words,” said Takayama. “With his photographs, he’s documented our history, and just one picture tells it all.”

In the video, Reyes, ruminating on his career covering Los Angeles’ Japanese American community, said, “I know more about your history than I do about my own.”

In remarks made after receiving his award, Reyes said he had two fears: flying and public speaking, which was why he kept his remarks short. He did, however, tell the Pacific Citizen, “I think it’s a great honor to be recognized by JACL.”

Next to be honored was Little Tokyo’s Japanese American Cultural & Community Center, which was founded in 1980. It received the Community Partnership Award. Accepting the honor was Patricia Wyatt, the recently hired executive director of the JACCC.

Alluding to Reyes’ remarks, Wyatt said, “I actually don’t have a fear of public speaking, but I do have a concern about standing to accept an award for which I’ve really done no work. I’ve only been at JACCC for about three weeks, but it’s been such an honor, and I’m delighted to be here meeting all of you today as a representative of this wonderful group of people that come together to create a community center that shares and celebrates everything that’s wonderful about Japanese and Japanese American culture.” 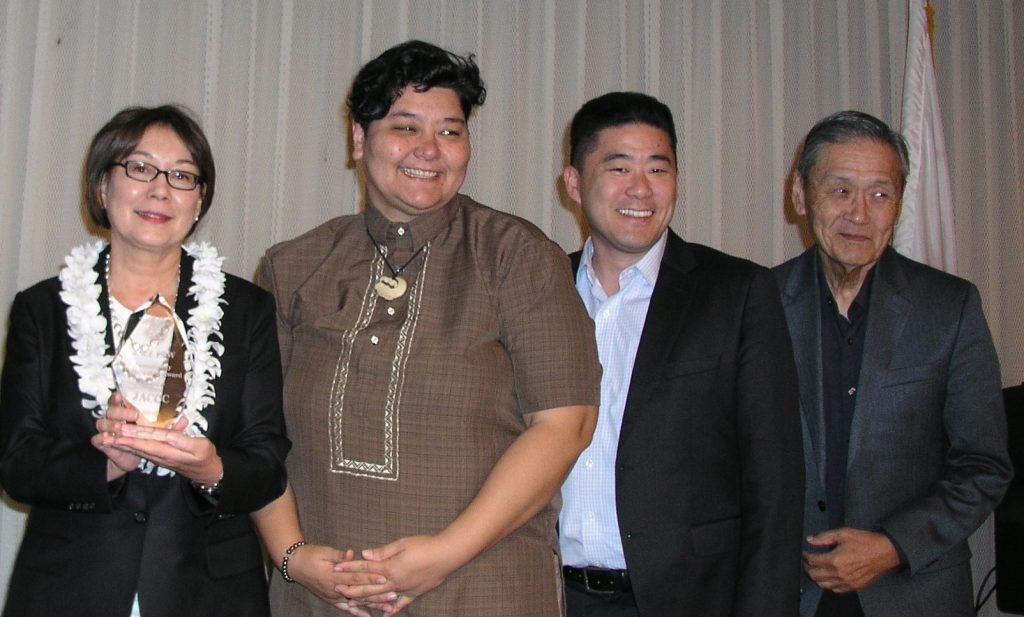 Wyatt then called up Alan Nishio a member of JACCC’s board of directors, to say “a couple of words,” to which he quipped, “All of those who know me would say ‘Alan Nishio’ and ‘a couple of words’ don’t go together.”

Nishio continued, “On behalf of the board of the Japanese American Cultural and Community Center, we’re so happy to have Pat as part of our team. I think she brings a new vision and direction for the JACCC.”

Wyatt then called up VP of Programs Alison De La Cruz to the podium, where she thanked the JACL and said, “We do a lot because there’s a lot to be done.”

Next up was JACCC Board Chair Craig Tomiyoshi, who credited and thanked the JACL PSW for its support when the JACCC brought the stage play “Allegiance” to the center’s Aratani Theater. 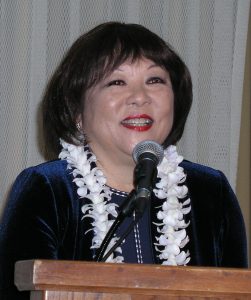 Next to be feted were PSW chapter honorees, each of whom received a Japanese ceramic platter. The first of the four honorees was SELANOCO JACL’s Patti Hirahara, who was acknowledged for her work with the City of Anaheim and its exhibition titled, “I AM AN AMERICAN: Japanese Incarceration in a Time of Fear.”

Also honored was San Fernando Valley JACL’s Marcia Mahoney, a 35-year veteran of Universal Studios who was recruited to the chapter to become a board member after her retirement. 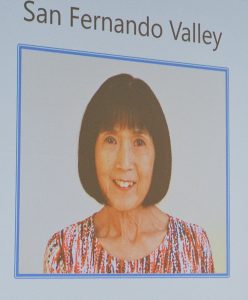 This photo of Marsha Mahoney, who was absent due to one of the wildfires that has beset California, was projected onscreen for the audience. (P.C. photo)

Introduced by Nishikawa, Mahoney was cited for her activities that include Suzume no Gakko (a summer cultural program for children), chairing the doughball booth during obon and serving as the Pacific Citizen Holiday Issue fundraising chair. Accepting the award on her behalf was Takayama, who told the gathering that Mahoney was absent because of wildfire activity near her home. 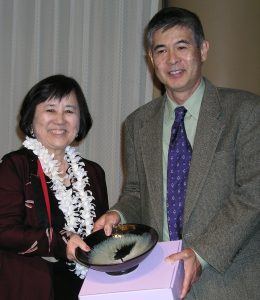 Sydney Shiroma of the San Diego JACL was the next honoree, and he was recognized for, among other things, his involvement with the chapter’s scholarship selection committee and serving as the chapter treasurer.

Last among the four honorees was Ventura JACL’s Ken Nakano, active since the mid-1980s, who was acknowledged for his service for many years as the chapter’s treasurer and his involvement with Oxnard’s historic Japanese cemetery, including its restoration after being vandalized in 2017. 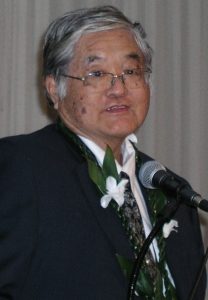 “This is a total surprise,” Nakano said, admitting that he wasn’t originally planning to attend. “My wife said, ‘You have to’ and I said, ‘Why?’ Eventually, they told me, ‘The chapter is honoring you!’ I thank the chapter for even recognizing me.”

The afternoon’s final honor went to Orange County Board of Supervisors Chair Lisa Bartlett, who was introduced by Inouye.

“I am so pleased as punch to be able to present the first-ever Courage Award in the 90-year history of the Japanese American Citizens League Pacific Southwest District,” he said.

Inouye then asked the audience whether they would have had the courage to do what Bartlett had done, alluding to news from June in which Bartlett accused a fellow Republican and state assembly member of sexual harassment. According to news reports, at least three other women have also accused him of the same behavior. 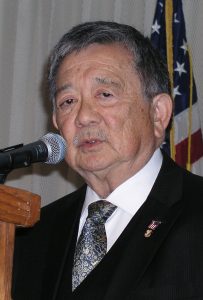 “This woman put it all on the line,” Inouye said, noting that “ … the gentleman who was running for re-election to the California Assembly asked the Orange County Republican Party to endorse his candidacy.”

It was at that moment Barlett said, “No,” and revealed that when the two served on the Dana Point City Council at the same time in 2011, “he harassed me.”

Once onstage to receive her award, Bartlett said, “It’s an honor and a privilege to be here today to receive this award for courage. It’s not easy, as a high-profile elected official, when you have a bad experience, to really want to talk about it. But I felt it was really important, and we’re still trying get this assembly member out of office because there are a number of other women who have come forward.”

Bartlett alluded to the difficulty of discussing such a traumatic experience, saying, “I still have 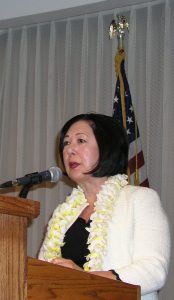 relatives, many of whom were in the internment camps, and they still to this day can’t talk about their experience because it’s still so real to them, that painful. They lost their houses, their farms and their pets. … They’re doing fine today, but those experiences are still very real to them, and they still hold a lot of pain.

“So for me,” Bartlett continued, “going through that painful experience of getting sexually harassed and having to talk about it, you relive everything all over again. But it was the right thing to do because this person did not get the endorsement of our party.”

Bartlett is the first Japanese American to be voted on to the Orange County Board of Supervisors in its 130-year history.