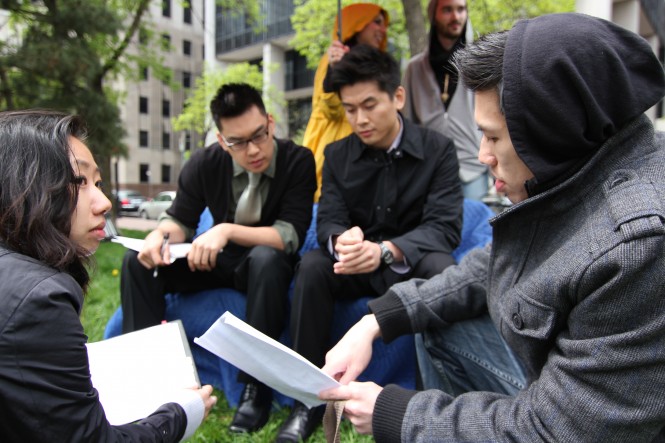 Director Andrew Chung decides to harness the power of the Internet to finance and stream his Web series about a group of twentysomethings trying to find their place in the world. 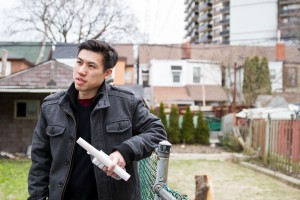 Andrew C’s directorial debut “Millions” centers on a group of young adults in their 20s who make a pact to pursue success and fortunate -at all costs. Photo courtesy of Andrew C.

Andrew Chung is someone who wears many hats. Known as “Andrew C” in the film world, he writes, edits, produces and directs — all skills seen in his directorial debut “Millions,” an award-winning Web series that was recently released online.

Chung’s foray into film began when he studied screenwriting at the Vancouver Film School in Vancouver, Canada. In film school, he was inspired to write the script for “Millions,” and he decided to develop it on his own as a Web series. The story has elements of friendship and tragedy and centers on a group of young adults in their 20s who make a pact in high school to become millionaires by the time they turn 30. Along the way, they encounter drugs, love, sex and greed.

Despite not having a lot of experience in production, Andrew C jumped straight into making this project, working with his sister, Melanie Chung, who co-directs and executive produces the series. The 32-year-old writer/director/creator took some time recently to chat with the Pacific Citizen about his creative journey.

The Pacific Citizen: What inspired the story of “Millions”?

Andrew C: When I wrote it, I was first starting film school, and I didn’t know what I wanted to do with my life. I knew I loved film, but before that, I had studied business — I have a business degree, and I studied in university before I jumped into film. When I went into film school, I knew I wanted to pursue film, but I didn’t know whether it would actually turn into something. I was going through a period in my life that was like a mid-life crisis, and I was trying to figure things out. I was seeing my peers figuring out their careers, kind of doing well, starting to settle down. And then you see a lot of images in media where you see young people getting rich very quickly, the advent of reality television and young kids, like the Mark Zuckerbergs, becoming so rich at a young age. I wanted to explore that [and see] what that does to our generation.

Is that how the concept of “Millions” came about?

Andrew C: “Millions” was the result of me trying to explore characters — not outright showing these societal conditions but showing the result of how kids grow up these days and what drives them to pursue something like money when passion is what makes you happy.

The Web series got its start on Kickstarter four years ago. What was the experience like?

Andrew C: We used it back in 2010, and I wouldn’t call it an infancy, but it was the beginning — it wasn’t as popular a thing as it is today. When we were telling people about the project, it was kind of a new experience for everybody. It was a great experience. I think back then it might have been easier to get pledges because there wasn’t an oversaturation of projects coming out looking for crowdfunding. Back then, we were kind of like one of the firsts, especially in Canada. When we did go out for pledges, it was great — we managed to raise our funding goal of $8,000. 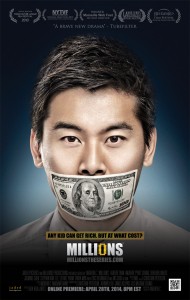 “Millions” received funding through Kickstarter back in 2010; going this route allowed Andrew C to have more control over his project as opposed to applying for funding. Photo courtesy of Andrew C.

Why did you decide to go with Kickstarter in 2010 as opposed to traditional ways of funding the Web series?

Andrew C: In Canada, there’s a lot of funding options. There’s a lot of grants and funding agencies that finance these kind of things, but no so much for Web series. That and, on top of the fact when you apply for funding in Canada, it’s a pretty long process even if you do get accepted, so at the time, I wanted to just make it. I started seeing these Kickstarter projects come, and I saw how quickly they were raising funding. I also thought it was a great option because you’re kind of in control of how much work you put into that campaign. I just feel like, in terms of a personal project, I would have more control as opposed to applying for funding, which we did try. But we were pretty unsuccessful, so we knew that this would be the next big option to try. We tried it out, and it worked.

The cast is diverse in terms of skills and experiences. What was it like working with the different actors?

Andrew C: It was a traditional casting process in terms of we just went out and had an open casting call, but we had nontraditional casting, in that we were reaching out to communities outside of the acting world. We reached out to dance organizations, schools and we just postered the city. I knew that I wanted an Asian cast, so I knew that, in order to find the talent, I really needed to scour the whole city. It is true to some extent that there aren’t a lot of Asians who go into acting, but I knew that in order to find this raw talent, I would have to be really proactive about it and open people’s eyes to it and get people interested in it.

Can you elaborate more on the casting process?

Andrew C: Part of the whole casting process to me was also to inspire people to go into the field because I feel that a lot of Asians don’t go into entertainment. I wanted to inspire them and give them a platform and say, “Hey, there’s this series with Asian leads, and it might be something that you might be interested in.” We had a massive audition process and a ton of submissions after doing an open call. We were extremely happy with the cast we ended up with because we felt that they were supertalented. I wanted to prove that there were talented Asian actors out there, and I feel that we did accomplish that. We had Asians of all ethnicities come out, and the cast came from all different backgrounds, but it was kind of my intention and my hope that that would happen. We were just really lucky.

The Marseille Web Festival is one of the largest and premier Web festivals in the world. What was it like to win an award there?

Andrew C: We went to France, we went to New York, we went to L.A. as well. We won an award in France for best direction and, finally after all our festival runs, we had a screening in Toronto and then put it online.

Tell us more about that whole experience.

Andrew C: It was an amazing experience. The festival itself is great and, of course, being in France, Marseille was a beautiful city. Just being around my peers and other people who had started their own Web series — they all had similar experiences. They just wanted to do something on their own without being shackled by the barriers of trying to get financing. So, a lot of the creators of Web series at this festival did it on their own. It was great seeing that there were other people just like you who wanted to do something and just did it. It was a pretty inspiring experience.

Now that the first few episodes of the Web series have been released, how does it feel to have your project out there online?

Andrew C: I feel it’s very satisfying to finally see it out there. Over a four-year period, you’re living with this project for so long — I’ve seen it a million times having edited it myself, so now that it’s out there, I’m just happy that people can finally take a look at it for themselves. I’m excited to hear what people think of it and how the audience reacts to it.

The show premiered on April 28. What has been the response from viewers?

Andrew C: So far, the response has been positive. It’s still pretty early, but so far, the reception has been pretty positive; I’ve been happy to hear that. One of my favorite scenes is in the first episode. It’s in a bookstore between the characters Brandon and Jay. Jay and Brandon have a conversation, and Jay gives his philosophy about relationships — he kind of plays the field too much even though he already has a girlfriend. I really like that scene because it’s the most complete scene in my mind in terms of writing and acting and often the way that it looks. There are a lot of scenes that I like that haven’t come out as well, so I hope people stay tuned.

What do you hope people take from these episodes?

Andrew C: I hope people can relate to it. I hope people can relate to the experiences that the characters in 20s are feeling. I hope that it kind of makes them look at how they see their dreams and their passions, and I hope it will inspire them to actually take control of their own lives to some extent — although the characters in the Web series sort of go in the wrong direction, it’s kind of a morality talent in that respect. I hope it inspires other Asian kids to go into entertainment. That’s why I put Asian faces onscreen — I’m hoping it inspires people to see themselves onscreen when they see the series and hopefully inspire other filmmakers.