[dropcap]A[/dropcap]ug. 6 seems like a good time to explain why I brought 100 paper cranes to Heart Mountain at the end of July.

My great-grandmother was raised in Hiroshima, Japan, and from a young age, I knew the story of the bomb. I knew that some of her family had died there, and I knew that she was very lucky to have already been in the U.S. before then.

In 1995, my mother was a chaperone for a high school Peace Conference trip to Hiroshima. I didn’t want her to go, but she told me it was important — people needed to know what happened there so it will never happen again, anywhere. And the victims need to be honored by spreading their stories and working for peace. She brought 1,000 paper cranes with her — explaining that it was meant as an offering to those who’d lost their lives — and my tiny fingers eagerly helped her fold them.

Fast forward to 2002 — at 12 years old,  I received an assignment to learn the life of a notable person in history and later portray him or her for an interactive presentation.

I chose Sadako Sasaki, and I wore a kimono that had been passed down in my family.  I don’t remember a time when I didn’t know Sadako’s story — my mother told me when  I was very little and repeated it over the years. 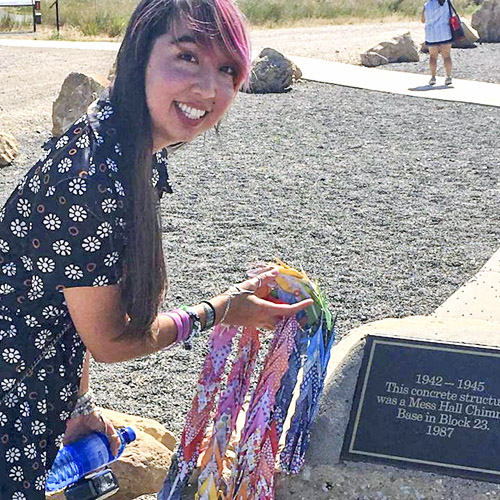 During the research for this assignment,  I read a biography called “Children of the Paper Cranes,” which goes into heartbreaking detail about Sadako’s life — standing barefoot at 2 years old when the A-Bomb exploded over her city, then a decade later when she came down with a mysterious illness that turned out to be leukemia due to her radiation exposure.

It’s the story of a little girl who didn’t want to die, who is going to die, and wants so badly to stay alive that when she hears about a Japanese folk legend that if you fold a thousand paper cranes your wish will come true, she spends her last months of life folding cranes.

And her classmates, teachers, family and a whole community rally around her to cheer her on, not because they think it will work, but because they, too, need some desperate hope to hold on to.

After she dies, her classmates, inspired by her perseverance, raise money to build a statue in her honor, as well as a memorial to all the children who lost their lives in the bombing. The memorial seeks to pay tribute but also spread the message of world peace and the hope that nuclear weapons will never be used again.

There’s this common misconception/myth that persists in the child versions of this story that Sadako didn’t make it to 1,000 cranes. But in this biography, I found out that she did. Her older brother started hiding the cranes so she didn’t know how many she’d made because he didn’t want her to give up.

I’ve never understood why the falsehood is spread. Does that somehow make it less heartbreaking? Like, “Well, she didn’t get her dying wish because she didn’t get to 1,000,” rather than, “She made it to 1,000 paper cranes, but wishes don’t beat cancer”?

So anyway, I’m 12 years old and I read this and it destroys me; I knew the ending already, but I still wanted it to turn out differently. This was somebody’s student, best friend, sister — this was somebody’s baby.

And it was around then that I decided I would make 1,000 paper cranes and bring them to Peace Park to pay tribute to Sadako and the children of Hiroshima. Eight years later, in 2010, I did.

Then last year, I started talking about going to the pilgrimages for the Japanese American incarceration camps scattered across the U.S., and it made me realize that I needed to make another thousand cranes.

So, I left 100 cranes at Heart Mountain, and I’ll do the same with the other nine  sites — Minidoka, Topaz, Gila River, Tule Lake, Manzanar, Rohwer, Poston, Jerome, Granada — so that when I’m done, I’ll have left 1,000 cranes scattered across the camps as an offering, a tribute, a wish of peace. And a promise — never again.

April Buscher is a board-certified music therapist who works in pediatric hematology/oncology at Tufts Medical Center. She is also director of extended day for the Brimmer and May School, who awarded her a summer study grant to attend the pilgrimage.