Reflections: Fred and I

“Fred” in the title is none other than the late-great Fred Toyosaburo Korematsu, and the “I” is me, just one of his thousands of admirers.

When I read in the Pacific Citizen that on Jan. 30, 2020, it would be Fred Korematsu Day in California, I recalled meeting him twice in different situations. 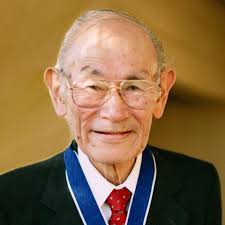 Civil rights pioneer Fred T. Korematsu is the first Asian American to have a day in U.S. history named after him.

It all began at the concentration camp in Topaz, Utah, where I lived with my family in Block 28, Barrack 10, Unit EF during World War II, and Fred’s family lived diagonally across from me at Block 28, Barrack 9, Unit AB.

Someone told me that Fred refused to be forcibly removed like the 120,000-plus Japanese into America’s concentration camps. He defiantly remained in San Leandro, Calif., and told authorities that he had a facelift to look Caucasian until he was arrested by the FBI.

He was tried and later sentenced to be incarcerated in the temporary detention center at Tanforan in San Bruno, Calif., and later to the concentration camp at Topaz, Utah.

At Topaz, someone told me about his facelift to look Caucasian. As a kid, I didn’t know anything about him but was curious and wanted to see what he looked like.

The next morning, I went to the Mess Hall, but Fred was a no show. Determined, I sat across from his barrack door waiting for him to show. About 9:30 a.m., there he was, bleary-eyed and carrying his toilet kit while heading for the bathroom. I jumped up and stared into his face. At first, he looked surprised, but he soon changed as if to say, “Stop staring, you stupid kid.”

I ran to my barrack and excitedly told my mother in Japanese that Fred didn’t look hakujin. She told me to repeat just what I said. I knew I was in trouble.

After that, she reprimanded me and told me that I was a foolish, rude boy, especially to a man like Fred. To punish me, she pointed to the family laundry and said that I was to help her.

Trailing behind her and carrying the laundry, I was worried that my friends would see me and accuse me of being a “mama’s boy.”

Nearing the laundry room, lo and behold, there standing in front of her door was Korematsu-san no oba-san. She exchanged pleasantries with my mother and commented that my mother now had an assistant, meaning me, to help with the laundry.

Then, my mother asked if Fred was upset with what I did. She looked puzzled and said, “Freddie didn’t say anything like this, and besides, your son is one of the nicest boys in this block.” My mother looked at me, surprised.

Upon entering the laundry room, I was still not free and feared that the guys might see me scrubbing away. Then, my mother told me since Korematsu-san said that I was a nice boy, I could go out and play.

I ran out of the laundry room saying to myself, “Thank you, Mrs. Korematsu,” then repeated in Japanese, “Korematsu no oba-san domo arigato.” Thereafter, I didn’t see much of Fred but only twice avoided him.

Years later, I attended a Topaz Reunion. On the last night during the Sayonara Banquet, I sat at a table with two empty seats next to me.

I wondered who was going to sit there.

Suddenly, one of the guests sitting at the table said, “Oh, here’s Fred Korematsu.”

I was surprised, and the Topaz staring incident flashed before me. I immediately stood up and almost had another stare down. I shook his hand and introduced myself. I wondered if he might remember our “Topaz stare down.”

It was interesting sitting with him.

He told me about himself and Topaz. Then, I wondered if I should bring up how we first met in Topaz. I decided to do so. When I finished, he looked at me seriously. I felt I had made a mistake, and in the background, I heard his wife, Kathy, giggling.

Fred demanded, “How do I look now?” Of course, I stated how great he looked. He continued to look at me and said, “You know what, I’m glad you said all that,” ending with a smile that told me how great he felt.

When the banquet was over, I went to the table where my brother, Milton, sat with his former Topaz High School classmates and buddies from the 100th BN/442nd RCT.

I told him about my stare down conversation with Fred, and he laughed. Then, my brother said, “I have an incident. I’m going over to tell Fred.” I tried to dissuade him but was unsuccessful.

When Fred saw us, my brother introduced himself. Then, Fred told him that he had an interesting conversation with me. Milt then said, “I don’t know if you remember this, but in Topaz, there were 10 of us, and we had a poker game, and you wiped us out. About three weeks later, you again wiped us out. I’ve been in the Army, and among other things, I became a good poker player.” My brother continued jokingly, “Maybe we can play a few hands, and I might be able to get some money back from you.”

Suddenly, Fred looked serious, which surprised my brother. But in the background, we heard Kathy giggling. Then Fred told my brother, “I quit playing poker. With all the money I won off of you guys, I had enough to retire.”

My brother looked puzzled at first, until he saw Fred smile, and we all had a laugh. His routine was not too funny, but when it came from a man like Fred, it was unusual and came out funny. I also found out about Kathy’s giggling. She knew that when he went to his serious face routine, it was going to be funny.

Fred was a controversial figure — some were for him, and some were against him. Despite all of this, he challenged his conviction. I never got to meet with Fred again, but I followed him in all the Nikkei newspapers, where he was photographed usually with his pipe in hand. He never gave up and fought to right a wrong of his conviction.

With ACLU support, his conviction was vacated in a decision by the U.S. District Court in San Francisco on Nov. 10, 1983. He did not stop there but continued to defend the civil rights of other groups like the Muslims held in Guantanamo Bay after 9/11. In 1998, President Bill Clinton presented him with the Presidential Medal of Freedom.

Sad to say I read of his passing on March 30, 2005. He was the great American who had moral and physical courage who gave of himself and set a great example for others to seek justice and fight for civil rights. He also showed all the values the Issei passed on to the Nisei.

Thank you, Fred. I and all the many others will always remember you for your greatness.

[Editor’s note: Fred Korematsu Day of Civil Liberties and the Constitution is celebrated on Jan. 30 in California to commemorate the birthday of Japanese American civil rights activist Fred Korematsu. It is the first day in U.S. history named after an Asian American. Since it was signed into law by Gov. Arnold Schwarzenegger in 2010, several additional states have also followed suit and recognized the civil rights pioneer. The Fred T. Korematsu Institute in San Francisco was founded in 2009 to honor his legacy and continues to promote the importance of “racial equity, social justice and human rights for all.”]