Reimagine Everything: Cherry Blossoms and History

We’ve all had good days and bad days. On April 1, I had an EMOTIONAL day as I was asked to make brief comments on behalf of our JACL D.C. Chapter at the 19th Annual Cherry Blossom Festival Freedom Walk in Washington, D.C. It all started with the kumi daiko (ensemble drumming) performance and a surreal scene with cherry blossoms falling right on cue between rays of sunshine as taiko drums started playing.

The Freedom Walk highlights and is a reminder of the fragility of our civil liberties and the vigilant role everyone must play in upholding the constitutional rights of all Americans. Our story is an honorable American story that can never be forgotten or repeated again.

In my comments, I mentioned how my grandfather, Rikimatsu, arrived in 1904 and reflected on how proud he must have been to hear that on March 27, 1912, Japan had given the first cherry trees to the United States as a sign of friendship, peace and hope. Little did he know that some 30 years later, so many families would be impacted by Executive Order 9066.

This was during a tumultuous time when Japanese immigrants, who had been coming to America since 1885, faced a lot of prejudice and racial attacks. Organizations with names like the Japanese-Korean Exclusion League (later renamed the Asiatic Exclusion League to reflect the increase in South Asian immigrants from India) were in their heyday in the early 1900s, and Alien Land Laws drafted by many western states restricted immigrants from owning property, including land. 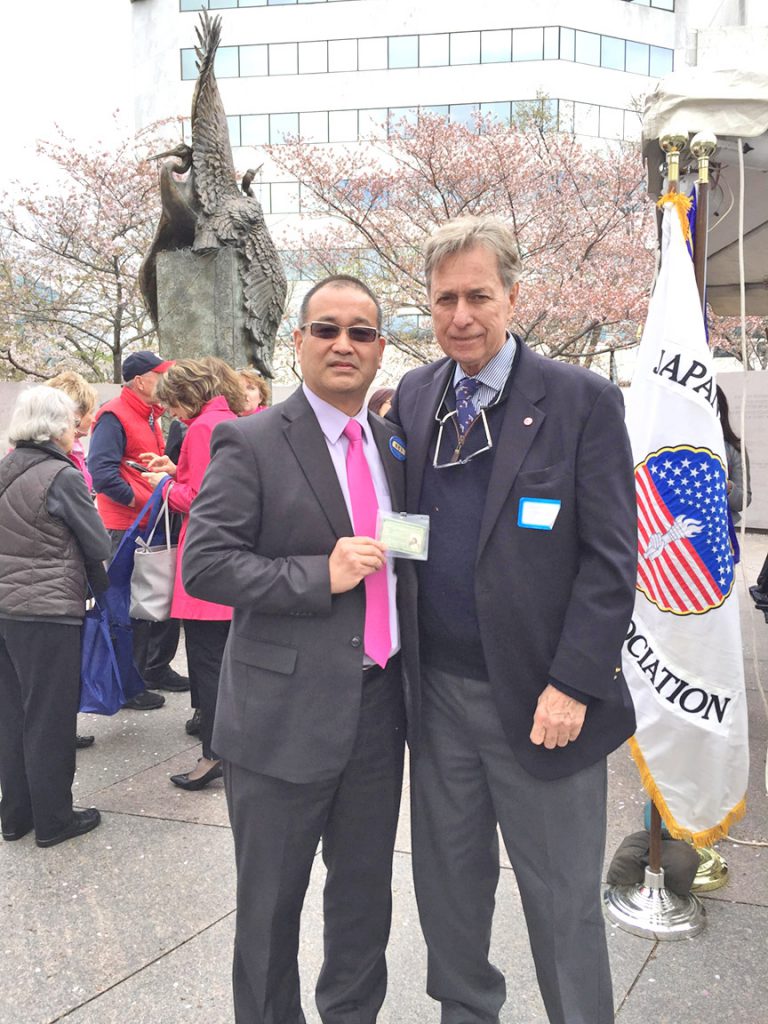 So, it’s not surprising that these deeply rooted feelings of hostility toward Japanese led to the incarceration during World War II. The concentration camps didn’t just spring up overnight, though literally they were constructed within months. They were the culmination of decades of prejudice that called Asians the “Yellow Peril.”

Yet, here was a shipment of over 3,000 cherry trees sent from Tokyo and accepted at a ceremony by the wife of President William Howard Taft. Today, these trees are a wonderful symbol of the friendship between Japan and the United States — a friendship that’s long outlasted the prejudice against Japanese that culminated in the unjust incarceration during WWII.

This year is the 75th anniversary of the signing of Executive Order 9066, which President Franklin D. Roosevelt signed on Feb. 19, 1942, soon after Pearl Harbor was attacked and pulled America into global war.

JACL chapters and other Japanese American organizations host annual Day of Remembrance events to commemorate FDR’s signing of E.O. 9066. This year’s events drew larger audiences than in the past because of the 75th anniversary and also because of the fear of similar treatment today of Muslims.

The Smithsonian recently opened the yearlong exhibit “Righting a Wrong: Japanese Americans and World War II,” which keeps alive the injustice of E.O. 9066, with many of the artifacts that are on display for the exhibit from JACL members whose families were incarcerated.

In addition, JACL chapters from across the country made financial contributions to underwrite the exhibit. It’s a powerful reminder of the dark side of America’s history. A special private viewing of the exhibit will be part of the JACL National Convention on July 6. In addition, a special evening program at Ambassador Kenichiro Sasae’s private residence is scheduled for July 7.

Like the cherry blossoms, each year brings out a special beauty of hope and optimism for a stronger nation for what we have learned from our past and our continuing friendship with Japan. I hope to see you at this year’s JACL National Convention.

Ron Mori is co-president of the Washington, D.C., JACL chapter and manager of community, states and national affairs — multicultural leadership for AARP.