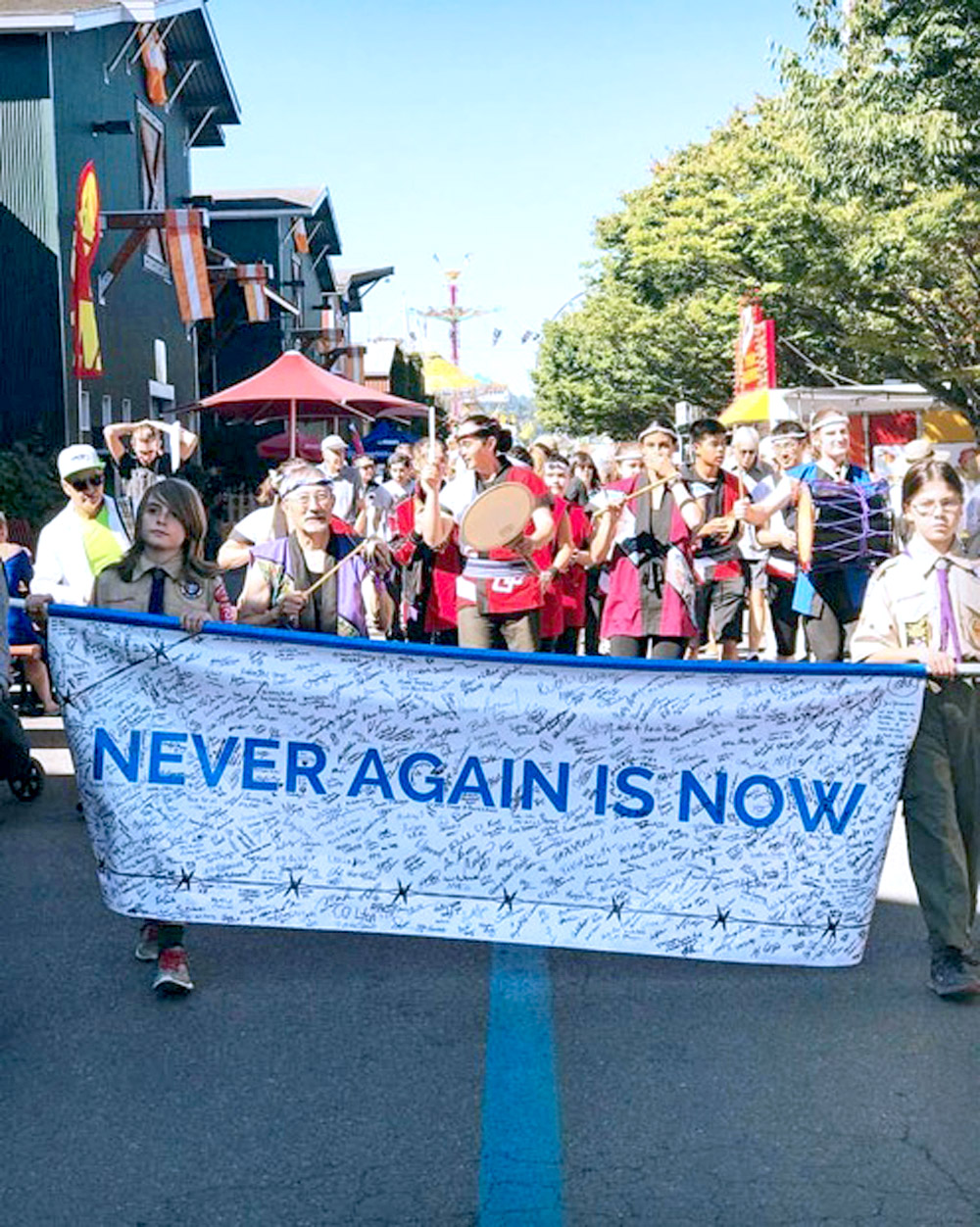 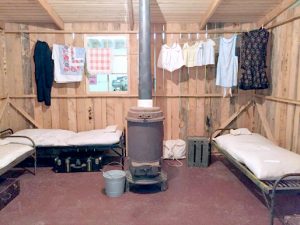 The potbelly stove came from Minidoka at the closing of the camp. It was owned by Victor Sakaguchi of Idaho Falls, Idaho, who donated it to the Puyallup Valley chapter to be shown in the fairgrounds exhibit.

The Puyallup Valley JACL hosted the 75th remembrance program of the Puyallup Assembly Center at the Washington State Fair on Sept. 2, as well as opened a special exhibit featuring interactive exhibits and displays and replicas of a family barrack and a horse stall furnished with period items for the duration of the state fair.

The event was held to honor the more than 7,600 men, women and children — as well as all those incarcerated in any detention facility — who called the Puyallup Assembly Center, or “Camp Harmony,” their home before they were transferred to the War Relocation Authority Camps at Minidoka, Idaho; Tule Lake, Calif.; and Heart Mountain, Wyo., for the duration of World War II after the issuing of Executive Order 9066 by President Franklin D. Roosevelt.

I walked in the Washington State Fair Museum and noticed a small Japanese woman in the replica of the family barrack room.

She sat quietly on the edge of the cot, tears flowing down her cheeks onto the straw-covered floor.

Occasionally, she would look up and tilt her head in one direction or the other.

I tiptoed into the room, and she whispered, “I lived in one of these.” I knelt down to better hear her. “There were four of us,” she said. “My mother, my father, my baby brother and me. Because we had a large room, a newlywed couple was also assigned to our room. We found some rope and hung our clothes to separate the space.”

She looked through the entrance across to the horse stall. Again, a tear slid down her cheek.

“My best friend lived in one of those with her older brother,” she recalled. “Her mother died, and her father was taken away somewhere.”

Before the war, the woman lived in a large house in Seattle with her own room, big backyard and many friends. Her father had a restaurant, and her mother was a seamstress. They had the latest appliances and two radios! Her mother had a wringer washer, but she remembers the washboard and tub her mother used daily for her brother’s diapers.

They did not know how long they would be gone, so her mother only packed enough diapers as she could in one suitcase. Later, her mother would say that she should have made more room.

She got up, walked across the room and smiled. She said she had a dress like the one hanging on the clothesline, black with roses. She wore it on Sundays.

This silver-haired lady talked about the soldiers and the guns. She didn’t remember actually being scared, but she did know she was to avoid them, if possible. The searchlights would keep her up at night because they shone in through the only window onto her bed. Sometimes, she wondered if she would ever see stars again. I held her hand.

It was an honor to host the 75th Remembrance of the Puyallup Assembly Center, aka “Camp Harmony,” from Sept. 2-24.

The Puyallup Assembly Center was located on the Washington State Fairgrounds in Puyallup, Wash. It was the only concentration camp in the State of Washington, and it remains a fairground today.

This was the first time in 75 years that the woman had visited the site. At the age of 85 now, she still lives in Seattle and came with her son, daughter and two grandkids to the fairgrounds.

None of them knew until that day that she was a survivor of “Camp Harmony.” They all thought she just wanted to eat corn dogs and cotton candy at the fair.

The woman I met crossed over to the horse stall and laid her hand on the potbelly stove. A smile came over her face, and she said, “Still cold. Never could get much heat from these things.” She touched the baby clothes and began to cry again. No words were needed to understand her emotions. She sat down and asked, “This won’t happen again, will it?”

The 75th remembrance program of the Puyallup Assembly Center, hosted by the Puyallup Valley JACL, featured keynote speaker Tom Ikeda, Densho executive director, whose grandparents were among those incarcerated there, as well as KING 5 News’ Lori Matsukawa as mistress of ceremonies.

As Lori read the names of each living survivor in attendance, they, in turn, raised a stalk of bamboo in the air; soon, all survivors of any detention facility joined in raising their bamboo stalks as well.

The audience then stood and gave an ovation of acknowledgment and a moment of silence to all those who have since passed away.

In addition, taiko drummers representing five local groups led the way to the George Tsutakawa sculpture “Harmony,” where a new sign that describes the sculpture was unveiled by Mayumi Tsutakawa. The sign was funded by a 2016 National JACL Legacy Grant.

The remembrance ceremony also featured the premiere of the video “The Silent Fair,” which features interviews with 12 former residents who were aged 4-18 at the time. The video was funded by the Washington State Office of the Superintendent of Public Instruction, and it ran continuously for the duration of the fair.

As family members rejoined the petite woman, she whispered, “Thank you. Make sure no one else has to live this way ever again.”

I nodded my head.